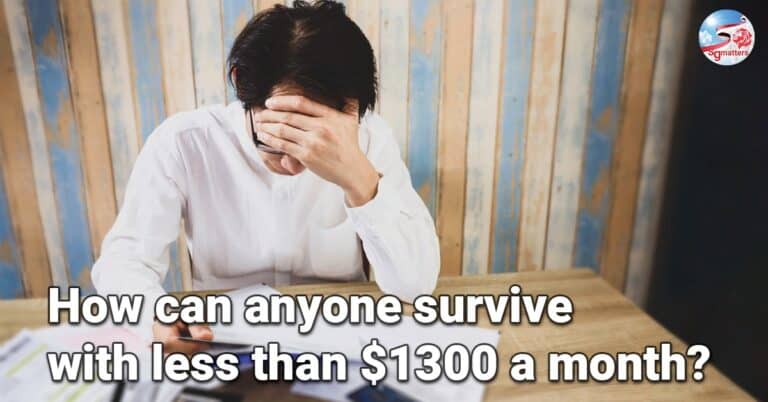 The simple and straight answer is: you can't. Not even if you earn the minimum of $1300 if you have a family to look after.

This is why the Workers' Party's call for a national minimum wage of $1300 is more a political cry than a genuine attempt to uplift workers. It is set at a level that avoids a big reaction from the business community while at the same time, portrays the WP as a party that cares.

How can anyone survive on less than $1300 a month? Good question.

If you’re a single person, with frugality, you may get by. But if you have a family to look after as well, it will be very, very tough.  Even with a minimum wage of $1300, you will still find the going very, very tough.

By my estimation, a family of four including two school-going kids will need around $2000 a month to adequately meet their daily needs. My estimation is based on the fact that a family with a per capita income of $690 or less qualifies for MOE financial assistance.

$1300 is too low to be of much help in lifting a low income family. This is why the Workers’ Party’s call for a national minimum wage of $1300 is more a political cry than a genuine attempt to uplift workers. It is set at a level that avoids a big reaction from the business community while at the same time, portrays the WP as a party that cares.

Can wages be artificially raised to the minimum of $2000 take-home so that the average family of four will have their needs met?

Wages are matched to workers’ skillsets and the value of their labour. If wages are (artificially) raised without a corresponding increase in productivity, then the cost of labour goes up. This cost increase will be offset elsewhere – either through reduced employment or higher prices which consumers (who include low wage workers) will have to pay. Small businesses especially have less capacity to absorb the increased cost of labour.

The US’ Congressional Budget Report (CBO) on the effects on employment by raising the Federal minimum wage found that an estimated 1.3 million citizens would lose their jobs if the minimum wage goes up to $15 per hour. This number could shoot even higher, possibly reaching 3.7 million.

There will be an impact on jobs. If 32,000 (which represents 1.7% of the Singaporean workforce) is not a small number, then any impact of a national minimum wage on jobs, no matter how minimal, is also not a small number. If we believe that every worker matters, then every job lost matters. We must be consistent in our position and not take the convenient argument when it suits and disregards it when it doesn’t.

Not by wage alone

There will always be low wage workers whose wages will not be enough to adequately meet their daily needs. There is a limit to how far wage can be increased. Help will have to come in other ways.

Recognising that wage alone is not the answer, the International Labour Organisation said that the minimum wage system is supplemented by other social and employment policies.

The Singapore Government has taken a holistic approach that is a combination of social and employment policies to help the low income group of workers. Our low wage workers are never forgotten.

Workfare encourages employment and supplements a worker’s income if his gross monthly income is ≤ $2300. It targets Singaporean workers 35 and older who are at the bottom 20% of the wage ladder. The quantum per year is from $1700 to $4000. Those with disabilities qualify even if they are less than 35. Since Workfare started in 2007, $6.8 billion has been paid out.

The Progressive Wage Model (PWM) is a ladder with clear steps for workers to upskill themselves and earn more. It is also known as Minimum Wage Plus because the first rung of the ladder is a sectoral minimum wage. What makes this sectoral minimum wage different from a national minimum wage is that it is not arbitrarily set. It is negotiated between unions and industry’s stakeholders and takes into considerations the circumstances and needs of the industry on the one hand and the needs of workers on the other. It is therefore a sustainable minimum wage without loss of employment.

The Silver Support Scheme provides a quarterly cash payout to seniors aged 65 and above. These are seniors who had low incomes during their working years, and now have less in retirement. Their total CPF contribution by age 55 is not more than $140,000. From next year, those who live in one and two-room flat will get up to $900 per quarter. This is the equivalent of $3600 a year under the enhanced scheme.

The GST Voucher Scheme is a permanent feature of the annual budget.

GST Cash provides lower-income Singaporeans with some cash for immediate needs. It is paid in August each year. This provides some relief to their expenditure.

All HDB households also receive Service and Conservancy Charges (S&CC) rebates of up to 3.5 months. The S&CC rebate has been paid out annually by the Government since 2013. It helps to offset a household’s S&CC payment directly.

Singaporeans born from 1 Jan 1950 onwards receive substantial support for their medical needs through the Merdeka and Pioneer Generation Packages. For younger Singaporeans in the lower income group, there is CHAS for their outpatient needs.

Having a roof over one’s head allows one to focus on work and training to upgrade oneself. Through generous CPF housing grants, the vast majority of Singaporeans are homeowners, including the bottom 20% of income group. Only 6% of our public housing stock are rental flats. These caters to the oldest and most vulnerable tenants who have little realistic opportunity of purchasing housing.

But for younger households, renting is to be a stepping stone to ownership.

Ms Sun said home ownership is central to providing stability and progress for families in the long run. “Home ownership gives Singaporeans a stake in our country, and gives each family a permanent place to call their own.”

About 3,500 rental flat families have become first-time flat buyers in the last six years. On average, about 600 of such families become home owners each year.

Education is key to social mobility.

Every Singaporean child gets $230 (primary school) or $290 (secondary school) a year in Edusave which can be used to pay for enrichment programmes organised by their schools. MOE provides financial assistance including transport allowance, meals vouchers, free textbooks, uniform and school shoes and waiver of fees to needy students. Every secondary school student will get a personal laptop or tablet for learning by next year so that no one is left behind.

Helping people in this pandemic

“Workfare and the Progressive Wage Model are key policy innovations to uplift our lower-income workers. Through Workfare, the Government supplements their incomes with cash and CPF top-ups to provide for both their immediate and retirement needs.” 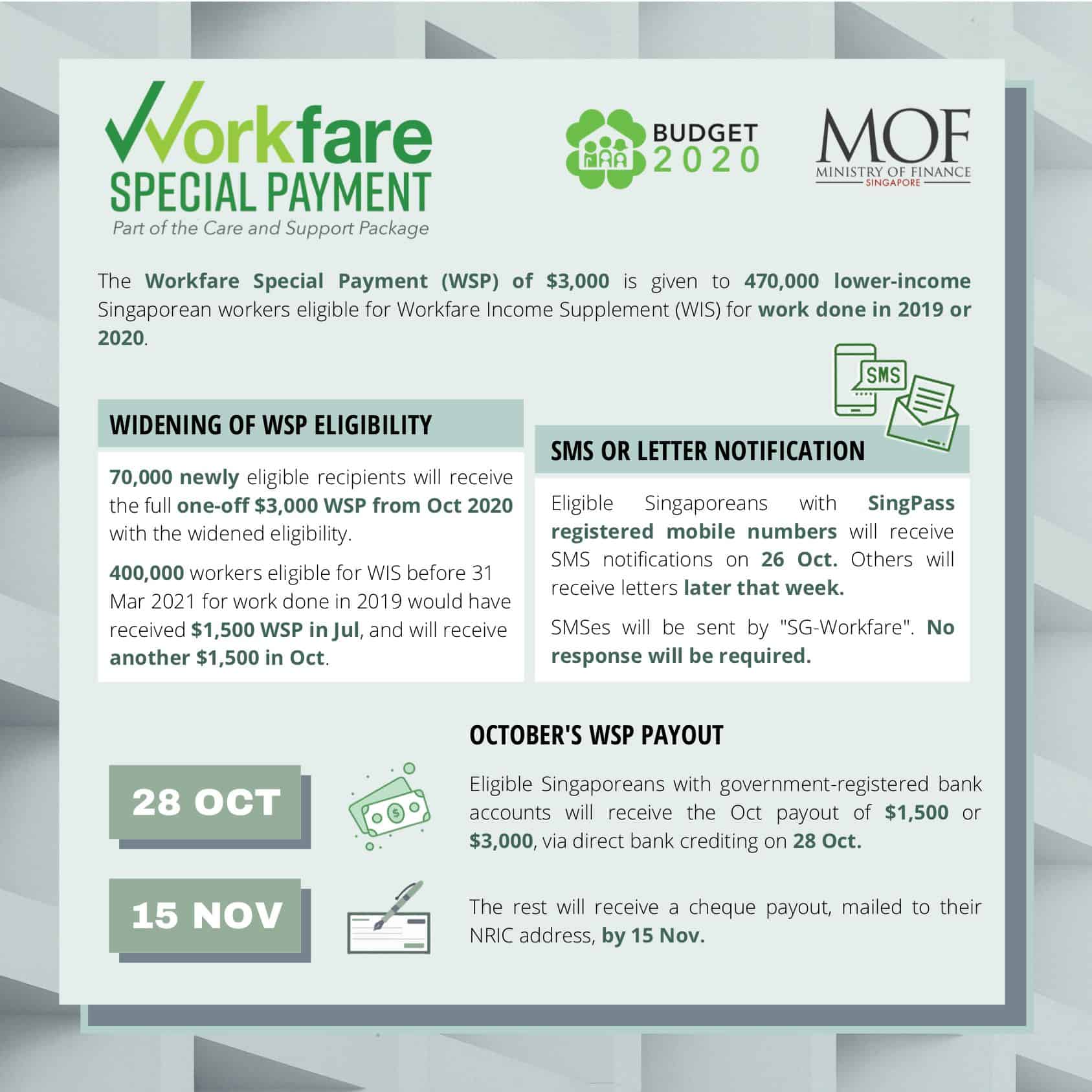 During this pandemic, more is being done to help our lower-income workers.

A special Workfare payment was introduced to help low income Singaporeans cope during this pandemic.

Each worker on Workfare will receive a total of $3,000 in cash. The first payment of $1,500 was made in July, and Workfare recipients will be receiving the balance $1,500 later this month.

Under the PWMs for the cleaning, security and landscape sectors, workers earn more than $1300 per month. The PWM for the Lift and Escalator Sector will see an entry wage of $1850 for lift technicians, way higher than $1300.

There are plans to expand the Progressive Wage Model to all sectors. Proposal for the Waste Management Sector has already been submitted to the government. As time is needed to roll out the PWM, Dr Koh Poh Koon said that the NTUC is looking to implementing sector benchmarks for different sectors.

Policies do not work in isolation. They are to be seen in context. Taken together, Singapore’s employment and social policies work together to provide the uplift that lower income families need in a sustainable and effective way.

May 13, 2022
PrevPreviousPWM has uplifted wages for workers without risking job loss, and minimising cost increases for consumers
NextThe risk of a political auction in minimum wage is realNext
On Key