The death sentence of Nagaenthran sparked another outcry. Once again, Singapore’s harsh drug trafficking law is being challenged.

Nagaenthran has been portrayed as intellectually-disabled and therefore incapable of taking responsibility for his actions.

According to a petition that has been going around, Nagaenthran was assessed to have an IQ of 69. How the IQ of 69 was arrived at – or who made that assessment – is anybody’s guess. But  what is confirmed is that Nagaenthran was capable of “continuously altering his account of his education qualifications” as noted by the High Court. He did so ostensibly to reflect lower educational qualifications each time he was interviewed.

He also worked as a security guard, a position of responsibility. Think about this. Can an intellectually-disabled person incapable of taking responsibilities for his own actions be employed in a position that required him to take responsibilities for the safety of others and properties? Clearly, this assertion that he is intellectually-disabled is just a last-ditch fabrication to portray the law as being unfair and unjust, and heartless towards a person whose mental function has been impaired.

Nagaenthran knew full well that it was unlawful for him to be transporting drugs, and hence attempted to conceal the bundle by strapping it to his left thigh and then wearing a large pair of trousers over it. He also had the intelligence to attempt to forestall a search by telling the Central Narcotics Bureau officers at the checkpoint that he was ‘working in security’. He was thus appealing to the social perception of the trustworthiness of security officers.

Importantly, he had been assessed to be not intellectually disabled by four psychiatrists, one of whom was a psychiatrist called by the defence, on behalf of Nagaenthran.

Lawyer M Ravi’s claim that Nagaenthran has a mental age below 18 just does not tie in with all the facts of the case and Nagaenthran’s previous occupations. Justice See, who dismissed Ravi’s opinion, noted that Ravi was not a medical expert, and not only that, he had met the prisoner only once – on Nov 2- and only for 26 minutes. In that short meeting, Ravi made his conclusion,

A Singapore Prison Officer who spent 3 years interacting with Nagaenthran had testified that Nagaenthran was capable of planning his call and visit schedules.

This isn’t the first time that a drug trafficker has been sentenced to death.

In 2005, a young Vietnamese-born Australian drug runner, Nguyen Tuong Van was caught in Singapore trying to smuggle almost 400 grams of heroin from Cambodia to Australia. The amount of heroin that Nguyen Tuong Van was caught with, was enough for 26,000 individual doses. It was said that he smuggled the drugs in order to pay off his twin brother’s legal debt. It’s also important to note that his brother was an ex-heroin addict.

More recently in 2018, 41 year old Omar Yacob Bamadhaj attempted to smuggle at least 1 kilogram of cannabis into Singapore from Malaysia. He was caught during a routine check at Woodlands Checkpoint past midnight on Jul 12, 2018. His father, who was present in the car and behind the wheel, did not know about the drugs.

Both men were sentenced to death for drug trafficking.

The potential impact of drugs on Singapore’s society

Let’s take a look at the most recent statistics on drug abusers in Singapore;

Just in 2020, we have a recorded total number of 3056 drug abusers. 1151 drug abusers recorded were new, which implies that these are people who had not been drug abusers prior to 2020.

Some of our healthcare workers have also shared via Reddit, their thoughts on the need for a heavy hand on drug trafficking in Singapore based on an in-depth interview that former PM Lee Kuan Yew gave on BBC HARDtalk, with hard-hitting questions posed by host Tim Sebastian; 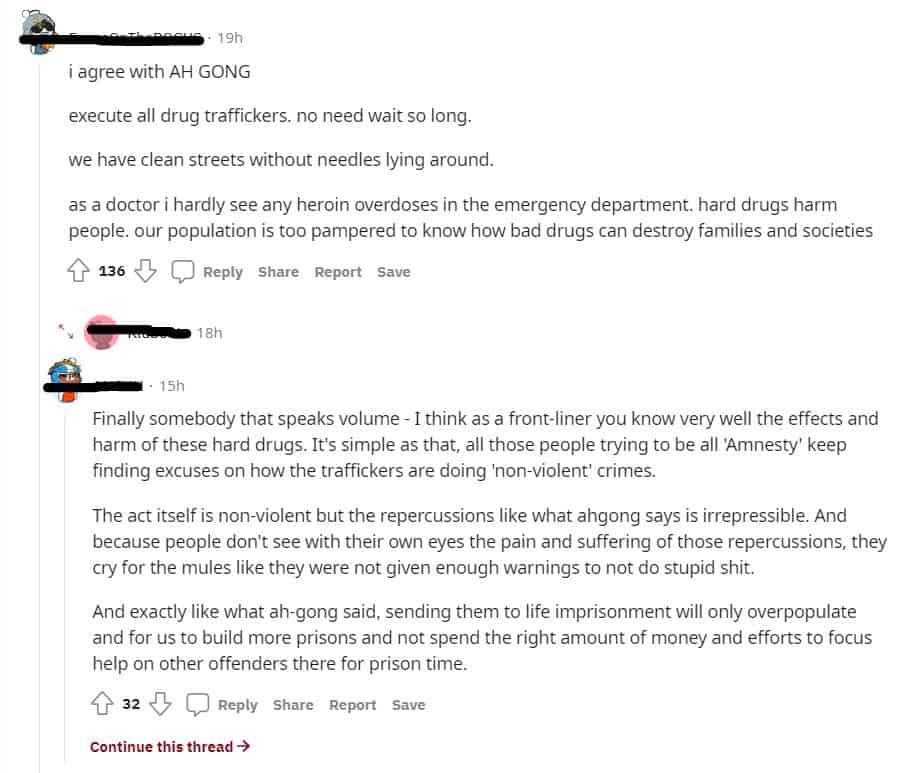 “In Singapore before you land, the hostess or the steward will announce that there are very heavy penalties if you are found with more than a stated number of grams of certain prohibited drugs. And if you still come in with a few kilos of them, which will destroy hundreds, thousands of families, one death is too kind. Because you are killing that family every day for years and years and years that a daughter or a son is an addict.”

While a death penalty for drug trafficking into Singapore may seem like a pretty harsh sentence, it has contributed more to our low-crime rates here than most may think. Without it, the consequences on our society would be unfathomable.

At the end of the day, our local laws are made and put in place to protect Singapore and all Singaporeans as a whole. So before you readily agree with foreign organisations and foreigners like Richard Branson, think about their motives and the intention behind appealing for the death sentence to be lifted.

The welfare of Singaporeans? Probably the least of their concerns.