Skip to content
Home » Malays in the Singapore army? They serve in the army, navy and air force.
Current Affairs

Someone issued a challenge and the challenge was quickly accepted. 😄 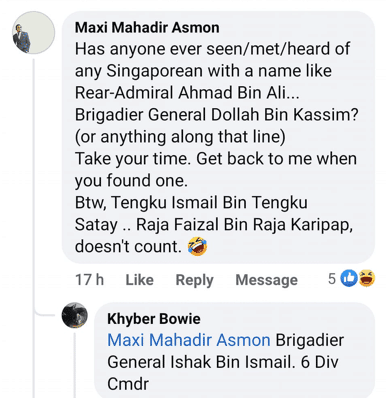 The first Malay to attain the rank of Brigadier-General is Ishak Bin Ismail. He was Parade Commander in 1997.

Lieutenant-Colonel (LTC) Mohamed Zakir bin Abdul Hamid is the first Malay-Muslim air force pilot to earn his wings with the elite Republic of Singapore Air Force in 1992. He was the commanding officer of Singapore Armed Forces (SAF) three-month deployment of KC-135 tanker aircraft in the Gulf in 2008.

Upon his return from the deployment, LTC Zakir said, “We completed all the missions assigned to us successfully. We also gained valuable operational experience by working with some of the most advanced air forces in the world.” LTC Zakir went on to become a flying instructor at the air force’s Flying Training Institute in Pearce, Western Australia.

Few make it as a fighter pilot in the Republic of Singapore Air Force (RSAF). Lieutenant Yusri Abu Bakar not only made the cut but also secured the distinction of becoming the first Malay Singaporean fighter pilot.

Lt Yusri was with the police force for a year after finishing his A levels before signing up with the RSAF in 1998 to pursue his childhood ambition of being an air force pilot.

In 2005, he was sent on a six-month deployment to Blangpidie with the Aceh Monitoring Mission. He also completed a six-month stint as a National Liaison Officer with the International Security Assistance Force in Kabul, Afghanistan in 2012 where he received a US Joint Service Commendation Medal in 2013.

Promoted recently to Major, Super Puma pilot Captain Muhammad Azlan Latiff of 126 Squadron has conducted many life-saving search and rescue missions. His first in 2012 will always be the most memorable for him.

After rescuing an injured worker on board a merchant vessel in the South China Sea, he flew the worker, who was drifting in and out of consciousness, to Singapore General Hospital.

Azlan’s career with the Republic of Singapore Air Force (RSAF) which began in 2007. He become a pilot instructor in 2018.

Cpt Iskandar participated in the Darwin Detachment 2020, the SAF’s first overseas detachment since the pandemic. He is recognised for his commitment to safe training amidst COVID-19 together with his fellow airmen and women. CPT Iskandar was also the Distinguished Graduate at the Tri-Service Warfighter Course.

In February 2015, Defence Minister Dr Ng Eng Hen said that the SAF has started to deploy Malay servicemen onboard ships as sailors who will go out to sea. Previously, Malays in the navy were only deployed as “sea soldiers”, who primarily patrolled naval bases. Dr Ng said it was a “practical issue” of having halal-certified kitchens onboard ships.

But provisions have been made for Malay Muslims who are willing to serve, said Dr Ng. “So we made and found some accommodation and started to have Malays in the navy as well, if the person is willing.”

Dr Ng was speaking to a 200-strong crowd of students and academics in a forum that was organised by the National University of Singapore and the Government’s feedback arm Reach. Malays now serve in the army, navy and air force.