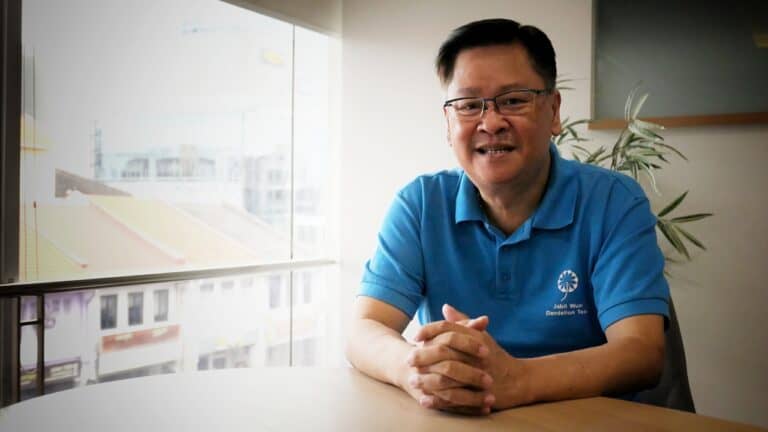 Meet Brother Tan Richard, veteran trade unionist, General Secretary of the United Workers of Electronics & Electrical Industries (UWEEI). As a strong advocate for workers’ training and career progression, Union Leader Brother Richard has played a significant role in the development of Singapore’s industry transformation map (ITM) for the electronics sector over the years. The ITMs are blueprints that map out how key industries in Singapore should transform themselves for the future.

When Brother Richard, an employee of Hitachi Chemical (Singapore), was in his company’s training department, he convinced the management team to introduce robotics into the company’s operations. This led to an increase in productivity levels and improved workers’ work prospects.

Upskilling is not just a buzzword to Brother Richard – he is a firm advocate of training and transformation. He strongly believes that upskilling leads not only to efficiency but also better work prospects for workers when they gain a more diversified set of skills. “Having more skills lifts their confidence levels too,” he shared.

“I always tell workers that if their companies offer any training opportunity, just take it. You will see that with a wider skillset, your salary will also rise, your opportunities will increase! It helps you if you need the skillsets to work in another industry one day.”

The Singapore economy is set to expand by 6.5% this year, based on a survey of economists by the central bank. The 24 economists who responded to the survey by the Monetary Authority of Singapore (MAS) said that Singapore could perform beyond expectations with the successful containment of Covid-19 and stronger-than-expected growth in the manufacturing sector.

“A lot of companies shared with me that they were in fact doing well during the crisis!” Brother Richard shared. But there were other challenges. Due to Malaysia’s Movement Control Order, many Malaysian workers were unable to return to work, and had to give up their jobs here.

“I have received many calls from companies about the shortage of manpower, asking me if I was able to solve their manpower issues,” he said. To help, UWEEI has been working with NTUC’s e2i (Employment and Employability Institute) to fill the vacancies. And this unionist is more than happy to help more workers!

“As union leaders, we do our best to help workers and we don’t expect anything in return. Serving workers, ensuring that their livelihoods are secure – that makes us really happy.”

What’s the most memorable incident as a union leader for Brother Richard?

Brother Richard recounted the most memorable incident of his work as a unionist: “I had this union member who was suffering from some health issues. It was quite severe and we knew that he could no longer work. With him being the sole breadwinner with four young children to support, I could only imagine his anguish. So we worked with the company to raise some funds for his family. I recall that fruitful day when I visited them to pass the family the cheque. The wife was crying, and I really felt their pain and worries…”

“At that point, I was reminded of why I do the work that I do. I thought to myself, ‘Luckily I am a union rep, and I was able to help’.”

Thank you, Brother Richard and our unionists for all that you do for our workers during this challenging time. Union work is often invisible, but workers’ welfare, livelihoods and work prospects that our unionists have uplifted mean way more.