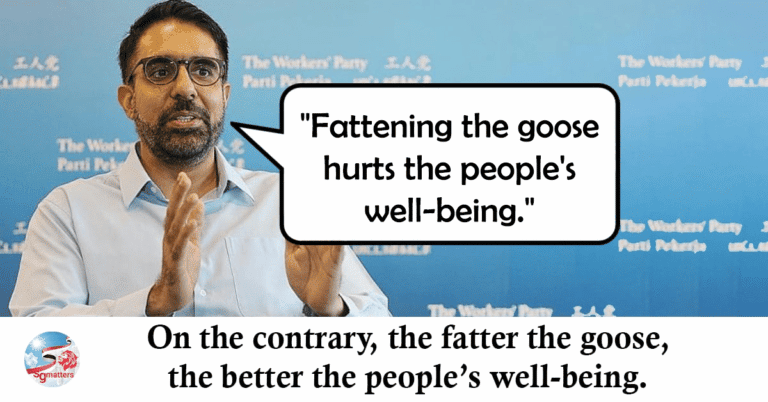 The Workers Party (WP) which opposes the GST hike, proposes to raise revenue to fund increased spending in the following ways:

Currently, proceeds from land sales are already being used – indirectly – for budget spending.

The proceeds are put back into the reserves where they are then reinvested, and the returns from such reinvestment are then used for budget spending (up to 50%).

This way of managing proceeds from land sales generates a steady stream of income which can be used for subsequent budgets.

The WP’s proposal to spend the proceeds from land sales means that once the money is spent, it is gone. We are left with fewer available assets to generate income for the future. This is akin to killing part of the golden goose.

Land is a scarce asset in Singapore. We do not have huge land mass to sell for money to raise income for generations to come. We have to reclaim land for many projects like Marina Bay, Marine Parade and Tuas Mega Port. Our past reserves are used to fund land reclamation.

Currently the NIRC framework allows up to 50% of NIR to be used for the annual budget.

The other 50% is saved and reinvested to generate future income.

This 50/50 division is fair to the current and future generations of Singaporeans.

The WP’s proposal to raise it to 60% means less will be put back to reinvest for the future.

Taken together, WP’s proposals to use land sale proceeds for spending (which reduces assets to generate future income) , and to increase the NIRC to 60% (which reduces money reinvested) will strip the goose of its fats and leave it lean and thin, and future generations of Singaporeans with less firepower to deal with the crises that will surely come their way.

Fattening the goose hurts people’s well-being. That’s what he is saying.

How can building up the only strategic resource we have to boost the defences of Singaporeans in times of crises ‘of all proportions’ be termed as ‘at the expense of people’s well-being?’

On the contrary, the fatter the goose, the greater the income it generates for people’s well-being. It is because of a fat goose that we have managed to keep taxes low.

Just think. If we don’t have this fat goose which contributes almost $22 billions for Budget 2022, we would need to raise $22 billion through taxes. Without this fat goose, people’s well-being Will be hurt.

If we fatten the goose further, we could raise more than $22 billions a year to spend on Singaporeans.

The WP is characterised by populism and short term policies without long term considerations.

Prudence and discipline are not their companions. A WP Government is ready to tweak the reserves framework each time spending goes up, taking the easiest way out, at the expense of the future of Singaporeans.

The readiness to dip into the reserves in place of doing the unpopular but necessary thing speaks of ill-discipline and a lack of courage to do right by every generation of Singaporeans.

We are where we are today because of fiscal soundness and prudence. It has earned Singapore a triple-A credit rating which allows the Singapore Government to borrow for large infrastructure projects at low cost, freeing up the reserves to be invested to generate income to spend on Singaporeans. Give up that fiscal soundness and prudence, and Singapore has more to lose than just depleting land assets to fund spending.

Not every popular policy is a good policy and WP’s proposals will hurt the well-being of Singaporeans in the generations to come.

May 13, 2022
PrevPreviousComing Soon: Finance Minister Lawrence Wong to unveil Budget 2022 on 18 Feb
NextGST from tourists. Why not? In 2019, tourism receipts was $27.7 billionNext
On Key