“We survive on willpower, kopi and Redbull.” The work of security officers is tough. Vulgarities, abuse from the public is more common than you think…

After a Bill passed in Parliament on 5 October introduced new offences and tougher penalties for those who harass, assault or hurt officers carrying out their duties, security officers are set to receive more protection. About time!

“Every security officer is a human being tasked to enforce rules, some of which are not well thought through. But as professionals, they do their jobs when called upon. Behind every abuse is an officer who feels upset, angry and emotional, so we appreciate these amendments and giving security officers greater protection.” NMP, NTUC Vice-President Mr Abdul Samad Abdul Wahab

In reality, more often than not, many of these cases never came to light simply because our security officers would rather “avoid trouble”. But, why should they deserve mistreatment when they are just doing their job?

Last year there was a joint survey conducted by Union of Security Employees (USE) and the Singapore University of Social Sciences, 40% of the 1,002 SOs surveyed say that they had faced some form of abuse during their course of work. Under the Private Security Industry (Amendment) Bill, penalties for those who harass, assault or hurt officers carrying out their duties will be stiffer than those meted out to individuals who commit the same offence against members of the public.

Security Officers Face Issues with Their Employers Too.

Other than challenges from the public, security officers sometimes face issues with their companies as well! A security firm Peregrine Security admitted in court last month that it violated employment laws by getting four of its employees to work for more than 12 hours a day on several occasions last year. Now, a study shared that working 55 or more hours per week is associated with an estimated 35% higher risk of a stroke and a 17% higher risk of dying from ischemic heart disease, compared to working 35-40 hours a week.  Apparently, excessive work hours in Peregrine Security’s case “occurred almost on a day-to-day basis”. There were occasions when the security officers worked for 20 hours per day for several days at a stretch! 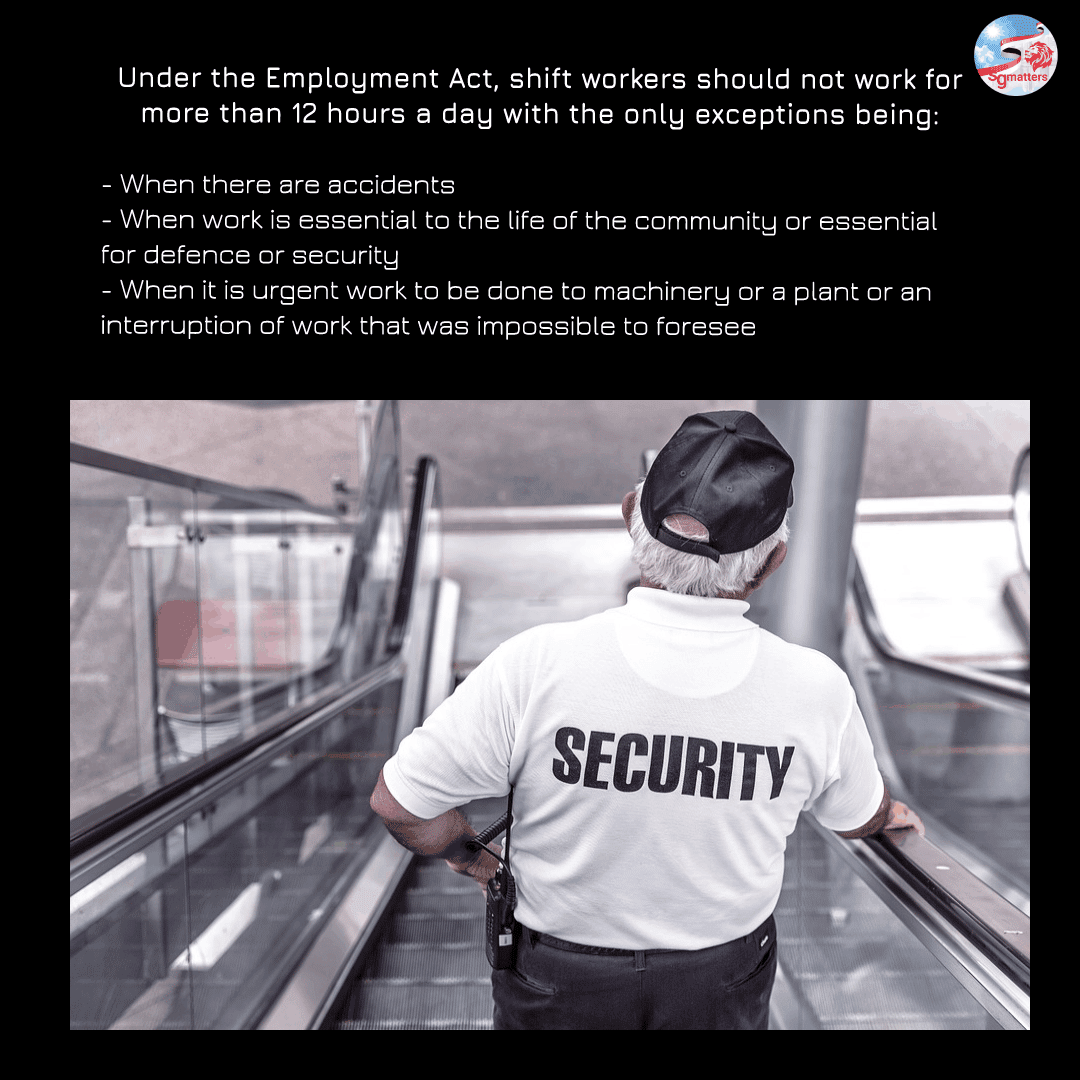 Due to insufficient manpower, their employer had asked them to work back-to-back shifts lasting 13 to 20 hours a day. This meant that they were occasionally given merely four hours of rest in between the shifts. Four hours. Inhumane to say the least. Thankfully, this came to light after an MOM inspecting officer began investigating the company on Sept 23 last year after receiving a complaint.

While the security industry has seen many significant changes that have benefited many security officers through the introduction of initiatives such as the removal of the overtime exemption (OTE), and the Progressive Wage Model (PWM) – “wage ladders” designed to raise the salaries of low-wage workers through skills upgrading and improvements to productivity, more can be done.

The Role of the Union of Security Employees

Nominated MP Abdul Samad, who is also NTUC’s vice-president, said the Union of Security Employees (USE) will be launching an application in the fourth quarter of this year to allow security officers and agencies to report any harassment or work-related grievances to the union. The USE has also been running classified ads to ask officers to come forward if they have grievances or if they know of agencies with illegal practices. Security Officers who are facing workplace-related disputes or need advice can seek assistance from USE’s Mediation Service.

Formed in 1978, USE represents all persons who are employed in the security and security-related services. They have evolved over the years and currently represent over 20,000 union members! 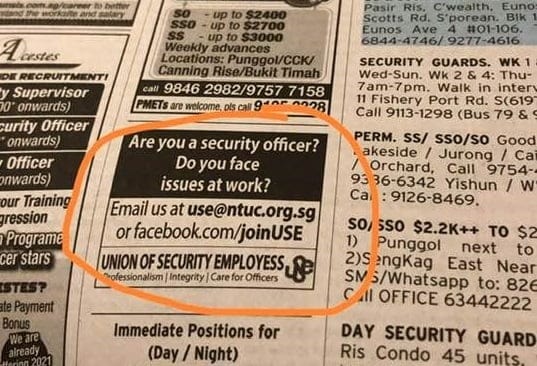 May 13, 2022
PrevPreviousFull text of PM Lee’s speech on the path to COVID endemicity: Protect the Vulnerable, Secure our Future
NextDid WP Raeesah Khan accompany a rape victim to make a police report?Next
On Key