Many Singaporeans discovered during Prime Minister Lee Hsien Loong’s National Day Rally speech that higher wages for low-wage workers mean consumers will have to pay more for some of their favourite things like bubble tea or bak chor mee.

“The cost of higher wages for the LWWs will have to be shared. Workers have to reskill and become more productive. Employers have to absorb part of the additional wage costs. The Government will help them with transitional support but businesses will still have to pass on some of the costs to their customers,” PM Lee said.

For some of them, this realisation was a rude awakening from a moral high ground calling for higher wages for low-wage workers. Suddenly, they realise that the government is not the one paying the wages of low-wage workers. 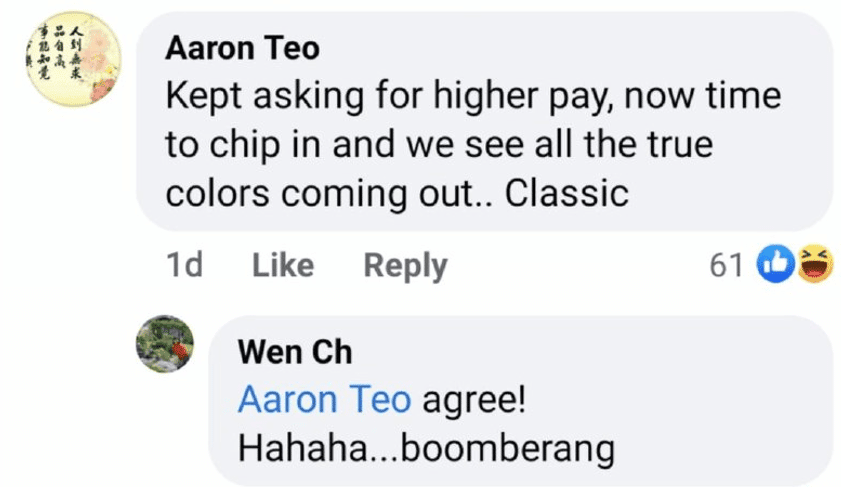 We’re as astounded as Elfie Pereira.

Typically, ministers’ salaries will find a mention among the unwilling consumers.

So too will rental get a mention. 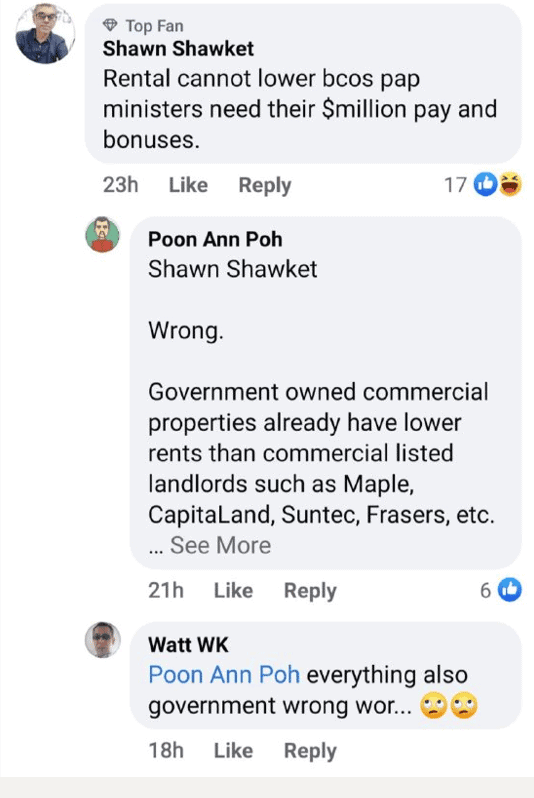 The truth is NEA’s hawker stall rents are competitive and significantly lower than stall rentals at commercially operated coffee shops and food courts. And 58% or 6 in 10 stallholders who applied for their tenancies to be renewed at hawker centres managed by the National Environment Agency (NEA) had their rentals decreased.

Low-wage workers are themselves consumers

Good question from Catherine Yap. This is why we have the Progressive Wage Model instead of just a minimum wage. Low wage workers will still be better off if the wage increase is greater than the price increase. Moreover, with the Progressive Wage Model, there are opportunities for the worker to upskill and earn more so that he/she does not have to be stuck at the bottom earning minimum wage.

It’s all economics, duh! And don’t be selfish. 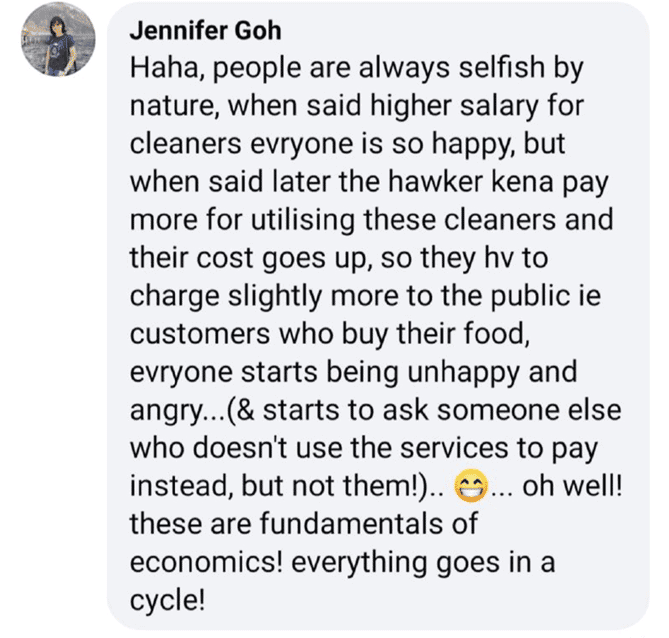 Here’s rubbing it in by Amanda Soh

Former NMP Calvin Cheng summed it up when he said, “I think some Singaporeans are finally waking up to the realisation that higher wages for others mean higher costs for them. But no – they don’t want to pay. Someone else must pay, even if irrational. Cut Ministers salaries! (To pay higher wages ??!). Lower rent!! ( then how does one allocate space? Rent control doesn’t work in a land-scarce country ). It’s always someone else’s responsibility.”

“Let’s be a mature society. In order that the people with the lowest wages to get paid more, we must pay more. This is also a good way to reduce inequality. If you want to profit off low-wage workers, don’t pretend to have a bleeding heart,” he added. 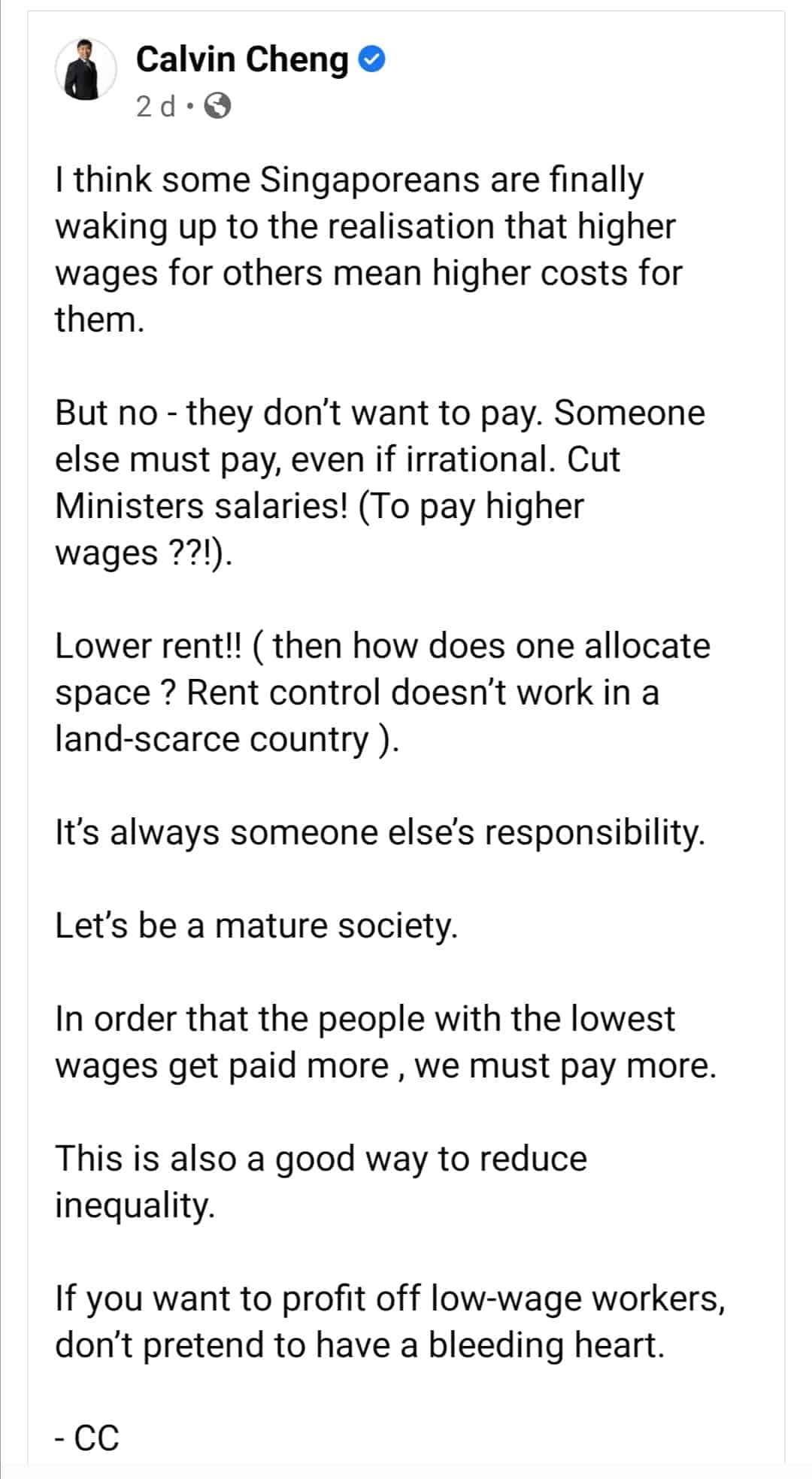 Uplifting the low-wage workers in our midst is a collective effort of everyone including us, the consumers. It is a whole-of-nation effort. We must be willing to do our part, pay a little more so that low wage workers can earn better pay. We have to put our money where our mouth is. Only when everyone is moving forward together can we build a strong and united Singapore that is also successful and prosperous, where no group is left behind.