The National Trades Union Congress (NTUC) has been championing workers’ rights over the past decades, since 1961. Things really took a change in 1969, during the 1969 Modernisation Seminar when NTUC decided to take on a more cooperative stance and work with the Government and employers instead of adopting a confrontational approach.

On Singapore’s road to independence, the majority of Singapore’s workers consisted of lower-wage workers. Many were struggling to make ends meet.

In light of the upcoming National Day Rally, we decided to compile a timeline of what NTUC leaders have done throughout the years, to strive for the betterment of the lives of our lower-wage workers. 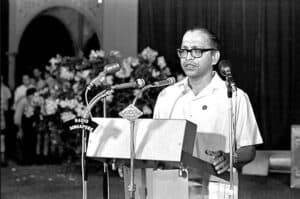 Devan Nair sought to go beyond the representation of rank-and-file workers in their relations with employers and to actively promote workers’ overall well-being. As a result, the concept of cooperative enterprises was born.  It focused on making goods and services available to blue-collar workers at affordable prices. A few examples of cooperatives that still stand today are NTUC Income and NTUC Fairprice. NTUC Income was the first cooperative to establish and helped to fulfil important needs like low-cost insurance which the market failed to serve at that time. 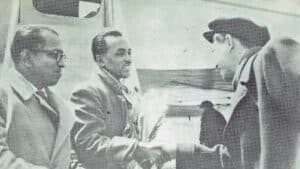 He was one of Singapore’s founding leaders. A widely respected and prominent unionist, Mr Mahmud first got involved in union work when he joined the Singapore Traction Company (STC) as a bus conductor. He became close friends with Mr Ahmad Ibrahim, Mr Devan Nair and Mr Lee Kuan Yew, won the support of many unions and was elected the President of the Singapore Trades Union Congress (STUC) in 1958.

When the STUC was disbanded, Mr Mahmud was appointed caretaker president and the first chairman of NTUC’s Pro Tem Committee. Subsequently, he took on the role of the trade union’s vice-president.  Thanks to his efforts, he laid the foundations for Singapore’s pragmatic approach to union issues, which at the time were done violently. This helped workers to improve their wages and working conditions. 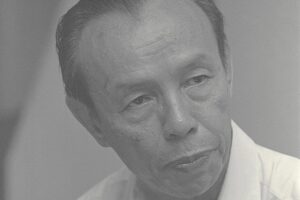 Mr Ho See Beng was Chairman from 1962 to 1964, President from 1964 to 1966 and then Secretary-General from 1966 to 1967 – a period of distrust between Government and unions, and unions and management. Mr Ho, who was born in Fujian, China, and was fluent in Hokkien, was credited with helping NTUC win influence away from the pro-communist unions and for helping to modernise the labour movement.

Ho was born to a poor peasant family in China’s Fujian province in 1918. His father, a trishaw rider, brought him to Singapore to join his mother when he was six years old. He left school at the age of 17 to work to help his mother, a washerwoman, make ends meet after his father passed.

As a result, Mr Ho See Beng was extremely passionate about uplifting the lives of lower-wage workers. As MP for Bras Basah and President of NTUC at the time, he voiced out concerns for lower-wage workers when called on the Traffic Police in parliament to be more lenient towards taxi drivers. He felt that taxi drivers were being fined too heavily, adding that first-time offenders should be warned and that subsequent offences should result in small fines.

He also espoused workers’ interests and opposed bills that he felt were detrimental to them. In 1968, Ho stood up against proposed amendments to the Employment Act, because the bill did not provide safeguards for employees’ interests and welfare. Ho, together with unionists, successfully pushed for the addition of some protective sub-clauses to the bill. In 1975, Ho proposed changes to the income-tax structure, such as increased tax reliefs, to help the working class to meet the rising cost of living. He also raised the subject of discrimination against ex-criminals and sought to alleviate it. 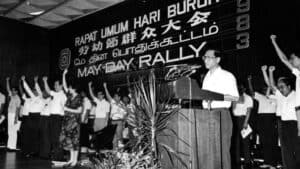 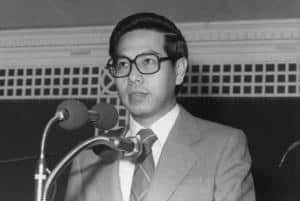 Ong Teng Cheong, the People’s President – was a ferocious union activist and served as NTUC’s Secretary-General from 1983 to 1993.

He was seen to pay special attention to low-income, daily-rated workers, and ensured that these workers still received their 13th-month bonuses despite the recession in 1985, which was the most severe economic downturn since Singapore’s independence.

In 1986, Mr Ong, in his capacity as Secretary-General, sanctioned a strike involving workers of an American company, Hydril, over the management’s unfair treatment of workers.16 It was the first strike in Singapore in eight years.  Tony Tan, the Minister for Trade and Industry, vigorously opposed his decision to sanction the strike, concerned with investors’ reactions to a perceived deterioration of labour relations or an impact on foreign direct investment needed for jobs creation.

Ong Teng Cheong viewed the strike as a success: “I had the job to do.. The strike only lasted two days. All the issues were settled.” 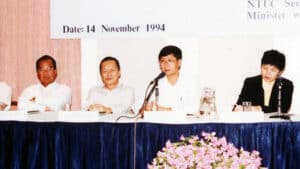 Lim also served as a member of the National Wages Council (NWC) from 1981 to 1991 and was instrumental in pushing for a flexible wage system to help older workers keep their jobs and to preserve jobs during difficult economic times.

On top of that, he was also able to persuade union leaders to support the Central Provident Fund (CPF) cuts and reform during the 1998 recession. This resulted in higher take-home pay for workers during the recession. He actively supported the changes to the CPF scheme, which were made for three reasons – to make wage costs more competitive, to create and save jobs, and to make older workers more employable.

Fuelled by his passion to help workers earn better wages and work prospects for a better life, he is known as the Father of the Progressive Wage Model (PWM), and mooted the idea in 2012 to the media, using those from the cleaning sector as an example.

The Progressive Wage Model (PWM) was first introduced by NTUC, a solution for increasing wages of lower-wage workers in Singapore. The PWM helps to increase the wages of workers through upgrading skills and improving productivity. It has now been implemented in the cleaning and security sector, with the most recent being the landscaping sector.

Through Lim Swee Say’s efforts in pioneering the framework of the PWM, it has helped uplift the work lives of more than 85,000 people. It is projected to cover 218,000 workers soon – more than double the number of workers currently benefiting from the scheme. 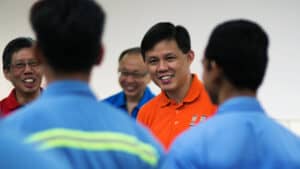 Under his leadership, he positioned NTUC as a  relevant and representative Labour Movement — striving to serve all working people with an expanded suite of products and services that meet evolving needs at different life cycle stages

Concerned that our working people are affected by rapid technological changes, he also highlighted the importance of training, skills upgrading and re-skilling; pushed for close collaborations with educational and training partners to create bite-sized, just-in-time training modules; and enhanced the NTUC-Education and Training Fund that funds course fees subsidies. 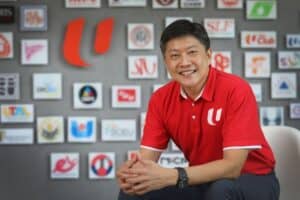 Mr Ng Chee Meng is the current Secretary-General of NTUC, and he has been serving since 2018. He has placed a lot of emphasis on uplifting the wages of lower-wage workers and pushing for greater coverage of the Progressive Wage Model (PWM), which also remains some of the trade unions’ primary focuses this year. In February 2021 earlier this year, the union had identified six sectors that could benefit from the PWM, namely the following –  waste management, food services, retail trade, strata management, pest management and solar technology sectors.

At the height of the COVID-19 pandemic in 2020, NTUC initiated various efforts such as working with management to cut costs and save jobs, as well as training and redeployment of workers. The vulnerable groups that NTUC  has identified to assist in 2021 include the self-employed, PMEs in their 40s to 60s, older workers in general, workers in the lower-wage group.

Let’s celebrate our leaders who have been consistently striving for the betterment of the lives of our lower-wage workers and continue their legacy by uplifting them, in the ways we can. 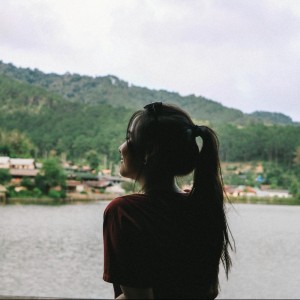