Skip to content
Home » From co-driver to free-rider; the free-riding politics of Workers’ Party
Politics

It is frankly laughable that in Singapore, opposition candidates campaigned for election not on their own merit but by reassuring voters they had no intention to form the next government so that voters may vote with peace of mind.

The Workers’ Party promised the First World Parliament. But first world parliament did not materialize.

Next, they asked Singaporeans to make them the insurance for Singapore lest the PAP failed. And then they told Singaporeans they had no intention to form the next government. They issued a bounced cheque.

From co-driver to free rider

They declared themselves the co-driver ready to slap the driver if he fell asleep or drove off course. But they fell asleep and found themselves checked for bad financial management.

During the last general election, WP Chief Pritam Singh told voters that the PAP was certain to form the next government. Therefore, the PAP did not need their votes. So, vote for WP, he told them.

This, of course, was an outright lie. Can anyone win an election without votes?

Had the SDP and PSP been as convincing as Pritam Singh in pushing his free riding politics, the outcome of the general election could be a government the voters did not want.

It is morally wrong for the Workers’ Party to tell voters they can safely vote for him because the PAP will still be the government. It is deceptive. It is dishonest and it is not right for Singapore.

Workers’ Party has been pushing free-riding politics for a long time now.

Where else in the world can you find voters voting for Party B when they want Party A to form the government?

When the system fails

Not desperate for power?

During the last general election, the Workers’ Party sought to:

It was frankly sad to hear Pritam protested that he was not desperate for power when in reality he is using dishonest, free riding politics to grow his power.

Who is the free-rider?

Unsurprisingly, after being called out for being a free rider, Pritam Singh was quick to attempt to pitch the people against the Prime Minister and PAP by protesting that voters who voted for WP are not free riders.

“If you say ‘vote for me. Somebody else will vote for the PAP, therefore the PAP will be the government’, that the economist will call a free rider,” PM Lee’s words in Parliament.

Watch this video for the explanation. 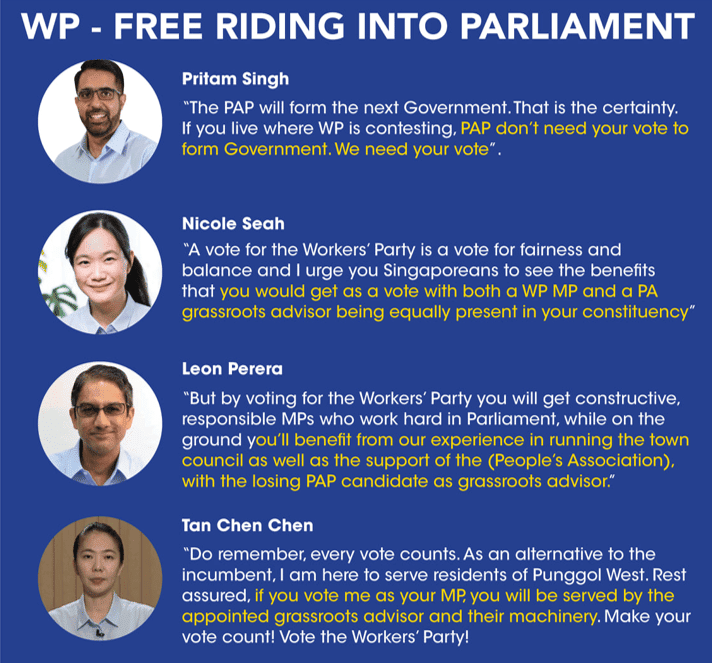 Next time, make your vote count. Vote for the party that you want to form the Government.