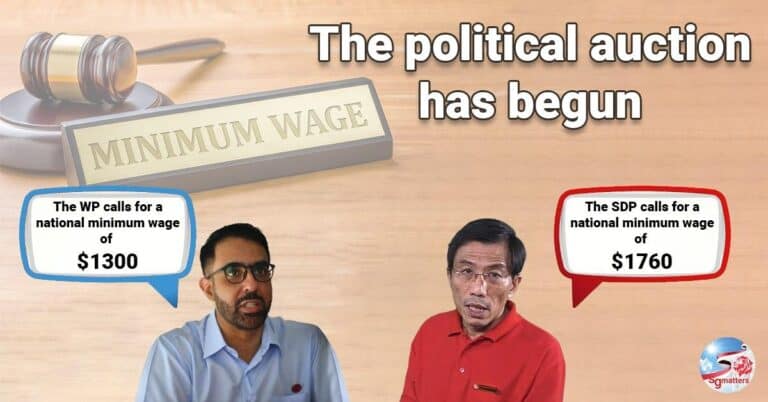 In Parliament, Dr Koh Poh Koon said that the risk of a blanket national minimum wage is the inevitable politicisation of minimum wage setting.

The risk of a political auction is real and unfolding before us.

Workers’ Party calls for a national minimum wage of $1300.

And now the Singapore Democratic Party is calling for a higher minimum wage of $10 per hour or $1760 per month. It has happened elsewhere in other countries. It happened last year in the UK.

UK Minimum Wage bidding war ahead of its Dec 2019 election

UK last year saw Labour and the Conservatives engaged in a bidding war of who can offer the highest minimum wage, disregarding the advice of the independent Low Pay Commission, the independent body that advises the government on minimum wages. The political battle lines on the national minimum wage were drawn up, ahead of the general election on 12 December. Labour pledged to extend the opposition’s £10 ‘real living wage’ to anyone over 16 while the Conservatives pledged to raise the National Living Wage to two-thirds of median hourly wages by 2024 and extend it to 21- to 24-year-olds.

The Institute of Fiscal Studies noted in key findings, that both parties were moving away from the evidence-based recommendations from an independent commission.

Both parties’ plans would take them well into uncharted waters for the UK. It said:

“Beyond some (unknown) point, a sufficiently high minimum wage must reduce employment. We need to tread carefully to boost the wages of the low-paid without damaging employment prospects too severely. If parties engage in a bidding war over minimum wages, they may end up hurting the very people they hope to benefit.”

Not ideologically against a minimum wage

The Singapore Government has said that it is not ideologically against a minimum wage. The first rung of the Progressive Wage Model is in fact a sectoral minimum wage.

In his speech in Parliament, delivered 15 October, Dr Koh Poh Koon said that they shared the objective to uplift the income of the low wage worker.

“Where we differ is the approach to getting there,” Dr Koh said.

Why would a national minimum wage be politicised and not the Progressive Wage Model since it also has a minimum wage feature?

May 30, 2022
PrevPreviousHow can anyone survive on less than $1300 a month?
NextSimplistic to think the problems of the poorest are just rooted in a reduced paycheckNext
On Key