The Online Citizen (TOC) has refused to apologise for the controversy caused by their video of the incident involving the elderly woman and the Singapore Police Force (SPF). TOC claims that they have been “appropriate and fair” when interviewing the elderly woman.

The elderly woman’s son had sent a legal letter to TOC on 7 Jul 2021. The letter stated that TOC “had made a judgment lapse” and an apology was requested by 12 July 2021.

TOC responded to the elderly woman’s son via their lawyer Lim Tean on 13 Jul, claiming that they have been “appropriate and fair” when interviewing the woman and declined to apologise.

According to Lim Tean’s letter, there had been a senior healthcare worker present during the TOC interview. The healthcare worker and TOC did not realise that the elderly woman was unable to recall the events that took place on 17 May. They claimed that they had been respectful towards the elderly woman, “by ensuring that her identity was protected as we blurred out her face in the video”.

The incident happened on 18 May 2021. Some netizens commented on social media that four policemen were bullying an elderly woman who was not wearing a mask. Social media platforms TOC and Singapore Uncensored uploaded posts on this incident.

MHA published a FB post on 22 May stating that TOC had been spreading fake news regarding the incident. Subsequently, TOC and two more social media platforms edited their original posts.

To clarify this claim, the police released a footage from their body camera which showed the policeman buying food for the elderly woman. He later spoke to her in Hokkien, saying “Come, let me bring you home”. 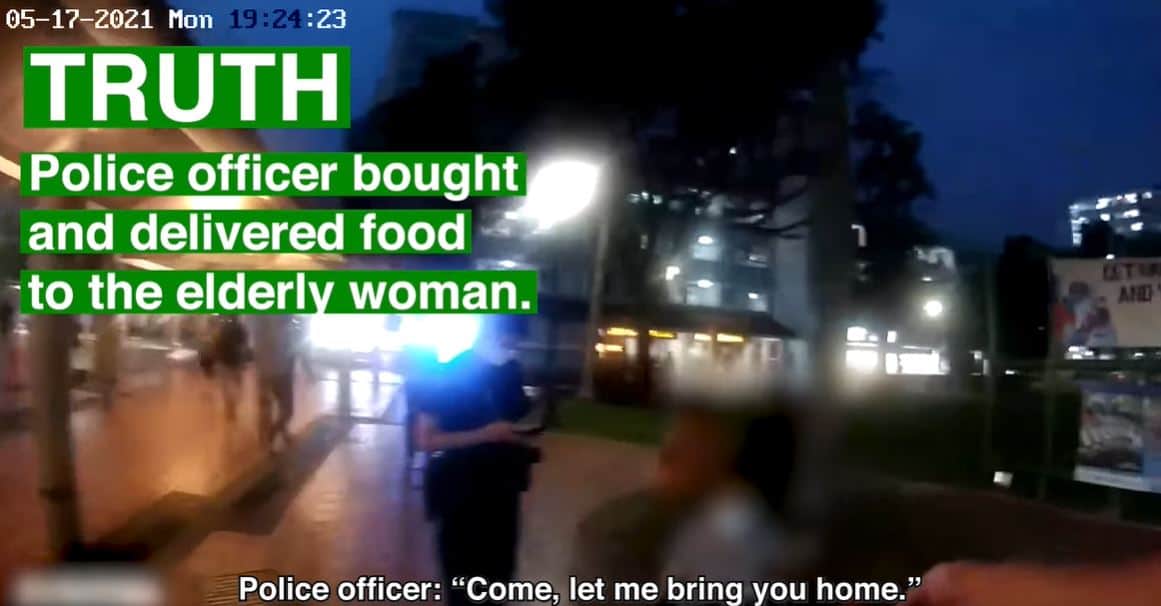 Minister of Home Affairs and Law K Shanmugam said it was despicable of TOC to mislead the elderly woman into saying certain things during her interview. It was a deliberate attack on the police. He said that the elderly woman’s daughter had confirmed that her mother was suffering from dementia.

Be wary of TOC and its fake news

To date, it is disappointing to see that TOC is unrepentant and unapologetic about their intentions to mislead. Through footage from the police body camera, it is clear that the policemen treated the elderly woman kindly and even bought food for her. They also reminded her domestic helper that the elderly woman was not wearing a mask.