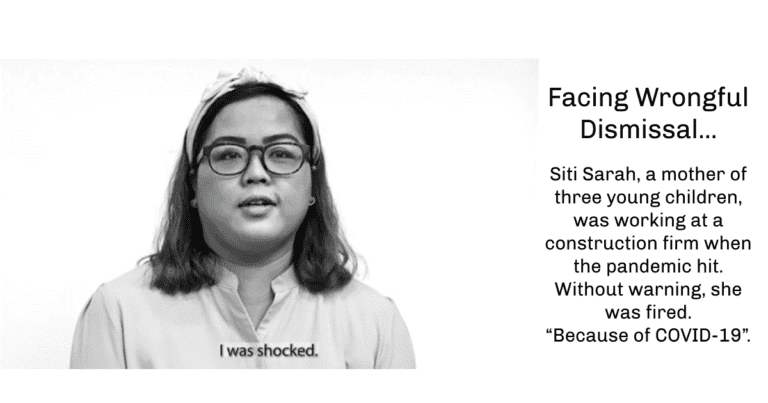 Siti Sarah is a mother of three young children. Finances is sometimes a concern as her second son has suspected autism, and they have to go for monthly check-ups. Sarah was working at a construction firm as an admin assistant when the pandemic hit. Without warning, she was fired. They told her not to go back. “Because of COVID-19”. That’s what HR told her when she asked if it were performance-related. At that time, Sarah felt that the situation was very unfair as she was not being engaged properly. Her husband picked her up on the day itself. But what was the proper reason for her dismissal? What added to the confusion was that a month later, the company hired someone else for her role. She then filed a wrongful dismissal case at the Employment Claims Tribunal. At this point, her union Building Construction and Timber Industries Employees’ Union (BATU) stepped in to offer support. They guided her through the process, and even helped her prepare for the trial to see what points she can share with ECT. Her gratitude to BATU was evident.

The union representative waited outside the courtroom from start to end – it just added to her confidence. Knowing someone was there made a world of difference. In the end, Sarah was compensated. A small win, but for her, it was heartwarming that she had someone to walk by her side. Sometimes, all we need is for someone to support and guide us along the way. It makes a world of a difference. Jerica, Industrial Relations Officer at BATU, and her team went all out for Sarah.

“People will give negativity, but there is so much value to being a union member.”

How can more workers benefit from union support in this uncertain climate?

The pandemic has brought many uncertainties. As NTUC Sec Gen Mr Ng Chee Meng previously mentioned in an interview, it would help if workers sign up for union membership in a turbulent job market.

“It is only through the collective strength that NTUC can do more.”

$9 a month – some would rather get a fancy coffee with that $9. So, what does a worker stand to gain when they sign up for the membership? What benefits are there?

Well, members get rebates on their NTUC FairPrice purchases, which could add up to more the annual fee of S$117. There are other privileges from attractions to dining to enrichment and hotel deals, group insurance too.

NTUC GIFT, a group insurance policy exclusively for members of NTUC affiliated unions/association is another perk. All union members who are below 65 years old are automatically covered against death and total & permanent disability of up to S$40,000. Union members’ spouses below 65 years old are also covered against death and TPD.

Protection and Guidance In Time of Need

More than that, NTUC can offer workers protection and guidance in time of need.

If you’re a member, the union will represent you in negotiations with the management, and hopefully negotiate for a fair outcome. Union leaders can be there to guide and to offer practical advice at a time when people are likely to be feeling lost.

To help workers stay relevant and address issues of skills gaps, union members can have an additional S$250 a year to defray training costs. On a bigger scale, NTUC has also been setting up company training committees for unionised companies, to help them transform and to support employees on their upskilling journeys – much needed to stay relevant in this climate.

Staying Close to the Ground

The global pandemic has affected jobs. NTUC has been agile and attuned to ground feedback from frequent engagement with workers from self-employed persons to PMEs. At the height of the pandemic, they have been helping workers from self-employed persons, to lower-wage workers to PMEs who have been laid off to pivot to new industries, as well as pick up new skills to get ready for when the economy recovers.

While the benefits are plenty, there are still employers out there who would rather their employees not join a union. But they needn’t have worry because Singapore’s tripartite model is a special one! As Labour Chief Ng Chee Meng says, NTUC’s collaboration with the Government is the “secret sauce” for Singapore’s success. One that has created a win-win-win outcome for everyone.

“The only way for us to sustain better wages, better welfare and better work prospects from my workers, take it from me, the only way is to ensure that our employers succeed. If employers don’t succeed, I cannot make these possibilities for the workers. NTUC in that sense, collaboration with government has worked for 60 years, and this is really our ‘secret sauce’ for success. Tripartism where everyone has a win-win-win.”

May 13, 2022
PrevPreviousSpeaker of Parliament Tan Chuan-Jin Contributes Photo Images for NTUC-U Care Fund and BAS’s 1st NFT Charity Auction
NextAgeism in the workplace: Does it exist?Next
On Key