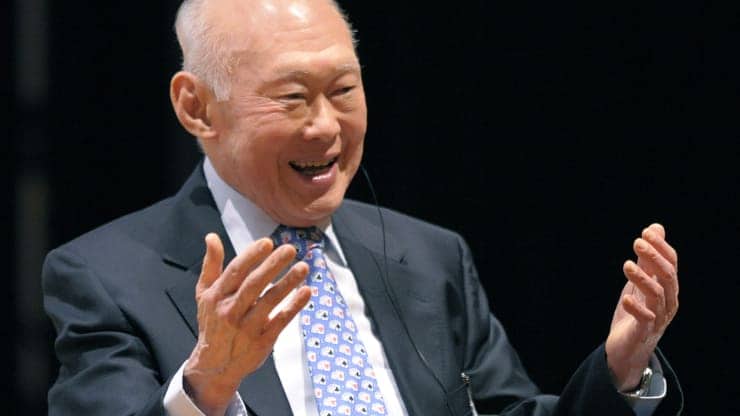 At the NTU Students’ Union (9th MINISTERIAL FORUM) on 18 February 2003, then Senior Minister Lee Kuan Yew was asked if the Singapore Government needed to re-examine the foreign talent policy.

“If we change that policy, we undercut our capability to grow and to expand,” he said. “If you look around the cities of the world, you’ll find in every city, a concentration of good minds and capable people, high energy levels and they are not people who come from that city alone.”

Mr Lee gave the example of New York where very few people at the top were born New Yorkers. They came from all over America to New York because New York was the financial centre of America.

London drew its talent from 60 million Britishers throughout the whole of Britain plus a massive number of Americans, Europeans and others who went there and do business because it was the biggest financial centre in Europe, Mr Lee said.

“We confine ourselves to Singaporeans, ….. there are 4 million in Singapore, 1 million are foreigners. You get rid of that 1 million foreigners, you will be unemployed.”

“Many of you will not find the jobs but of course because you have the vote, you’re telling the government, “Me first” but does it make sense? Do you think that it’s been the job of my colleagues and myself, more my colleagues now than myself, to create prosperity for foreigners or to create prosperity for the people who elect us and who we have to look after? The more talent we draw into Singapore at all levels, to make up for what we haven’t got, the more we will thrive.”

Mr Lee said, “You may feel discomforted when you are missed for a promotion or for a job which you think is yours but is that the wise conclusion that you can come to?”… In many fields, we are now facing world-class competitors. Let me put Tanjung Pelapas into perspective. We are not competing against ordinary management. Maersk is a world-class player and we have got to have world-class players in PSA to match Maersk or you’re done for.”

“If we are playing in the Southeast Asian Games, maybe we’ll win in ping pong or win in badminton. When you go to the Olympics or even the Commonwealth Games, that’s already a different level of competition. And because of transportation and communication technology, so decisive now that anybody can enter any field, we have world players now coming in.”

“So in the end, do you have a management that is effective, far-sighted and decisive as the best in the game. Can you get it out of 3 million people? …. We have 20 years ago, 60,000 Singaporeans born each year. Let me tell you from experience, to find 60 world-class players out of that 60,000, one a thousand is not easy. Now, we are producing 40,000 children a year. Without immigration, we’ll be in very severe trouble.”

Mr Lee said, “And if we depend only on Singapore talent, I say today Singapore cannot be sustained. It’s as simple as that. If we do not attract, welcome and make talent feel comfortable in Singapore, we will not be a global city and if we are not a global city, we will not count for much. It’s as simple as that. The days when we could be a regional city, that’s over. Modern transportation and communications — you either play in the big league or you’re not a player.”

“How do we overcome this? I say, “Get talent here. Make this different from all other cities.