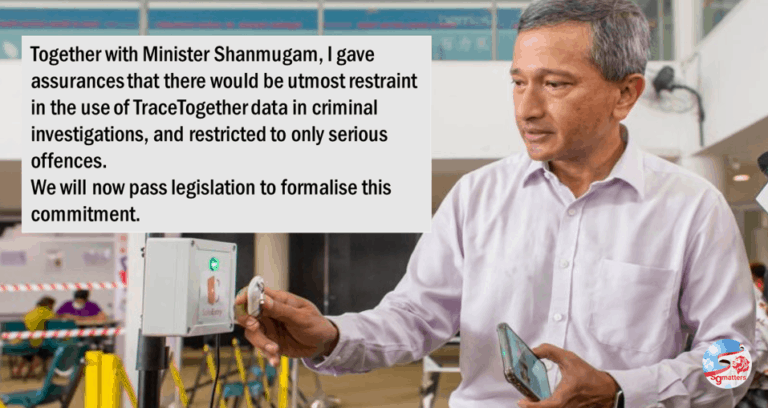 Smart Nation and Digital Government Office (SNDGO) said that the Government will pass legislation to formalise assurances that the use of TraceTogether data would be restricted to serious offences.

On Monday (4 Jan), Minister of State for Home Affairs Desmond Tan said in Parliament that TraceTogether data is not precluded from provisions under the CPC that allow the police to access data needed in criminal investigations.

The revelation caused some public disquiet as the Minister-in-Charge of the Smart Nation Initiative, Dr Vivian Balakrishnan had assured the public earlier that the data from TraceTogether would be used strictly for contact-tracing.

Following the disquiet, Dr Vivian Balakrishnan and Minister for Home Affairs and for Law, Mr K Shanmugam assured in Parliament on 5 January that the use of TraceTogether data in criminal investigations would be restricted to serious offences.

SNDGO announced in the statement on Friday (8 Jan) that the Government will pass legislation to formalise these assurances.

The office also acknowledged their error in not stating that data from TraceTogether is not exempt from the Criminal Procedure Code.

It is not in the public interest to completely deny the Police access to such data, when the safety of the public or the proper conduct of justice is at stake, the statement said. If a serious criminal offence has been committed, the Police must be able to use this data to bring the perpetrators to justice, seek redress for the victims, and protect society at large.

The proposed legislation will set out a full list of seven categories of serious offences for which the personal data collected for COVID-19 contact tracing can be used for Police investigations, inquiries, or court proceedings.

Apart from these seven categories, the TraceTogether data cannot be used in the investigations, inquiries or court proceedings of any other offence.

The legislation will be introduced in the next Parliament sitting in February on a Certificate of Urgency.

SNDGO said, “We value the trust that the public has placed in the TraceTogether programme, and feedback from members of the public.”

Dr Vivian and Mr Shanmugam held a public consultation on Friday with members of the press and academia, the legal fraternity, and technology experts to hear their views on the matter. The views gathered will inform the debate on the upcoming legislation.

In a Facebook post, Dr Vivian said, “Together with Minister Shanmugam, I gave assurances that there would be utmost restraint in the use of TraceTogether data in criminal investigations, and restricted to only serious offences. We will now pass legislation to formalise this commitment.”

“We value the trust you have placed in us and the TraceTogether programme,” he said.

The legislation will specify that personal data collected through digital contact tracing solutions can only be used for the specific purpose of contact tracing, except where there is a clear and pressing need to use that data for criminal investigation of serious offences. The legislation will set out a full list of seven categories of serious offences to make this clear

May 13, 2022
PrevPreviousTribute to Encik Mahmud Awang, 93, who passed away in Johor Malaysia
NextIs it true that the Singapore Dollar will be replaced soon?Next
On Key