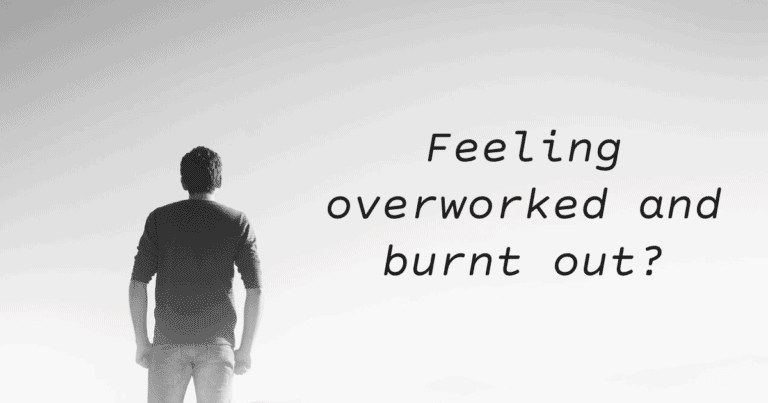 It would not be an understatement when we say the past year was not easy for most people. The impact of COVID-19 sweeping through the globe has certainly had an impact on the economy. This economic uncertainty coupled with the ever-changing safe management measures, has left workers struggling to cope.

With remote working foisted upon workers, they have had to adapt to a new style of working. Many workers face the challenge of juggling work responsibilities alongside family commitments, blurring the lines between work and life even further. For companies affected by the economic downturn, manpower might have been cut, leaving existing staff even more overloaded yet unable to speak out for fear of losing their rice bowl.

While in pre-covid times, workers would be able to better gauge their boss and colleagues’ emotions in person, they now have to guess through a Zoom window. Not having any social interactions with co-workers face to face also takes away the opportunity to build meaningful connections and foster teamwork. The situation is even worse for new staff who might have never even met their colleagues in person for months on end.  Many employees are burnt out.

If you feel burnt out, you are not alone.

Even with the active ongoing efforts by the Government to vaccinate residents, it’s likely workers will be stuck in limbo for quite some time.

The 2021 Work Trend Index, a study by Microsoft and LinkedIn, surfaced the toll of “the new normal” on workers. With the rise in having to communicate digitally, workers are spending as much as 2.5x more in online meetings with the average time in meetings increasing from 35 minutes to 45 minutes. 42% of respondents also sent more online chats after office hours. This vicious cycle of waking to work, not having a good work-life separation and working overtime because of this blurring of work and life has led to 49% of respondents feeling exhausted and 58% feeling overworked.

1 in 2 workers, or about 49% are thinking of leaving their employer, higher than the global average of 41%. There is clearly a need to combat digital exhaustion and burnout as it becomes more prevalent amongst workers as this could potentially lead to mental and physical health issues. 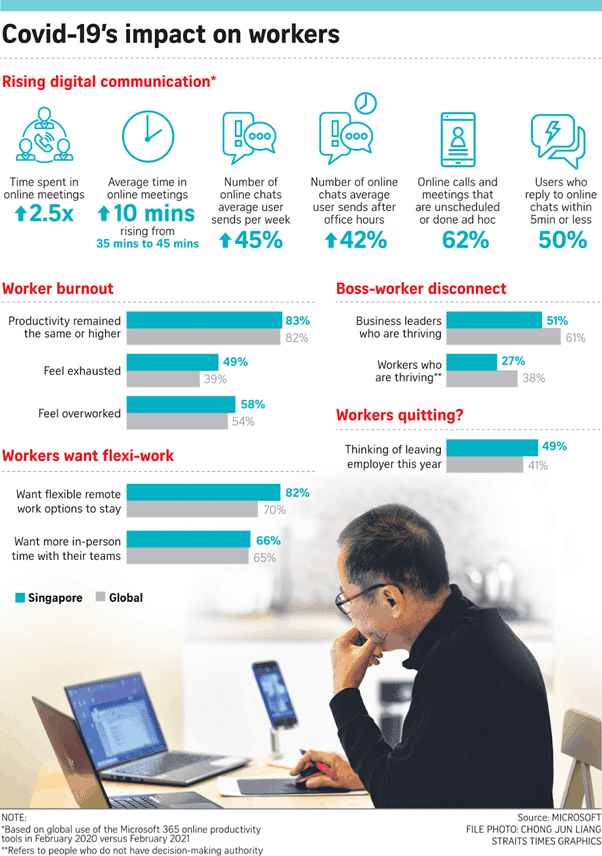 The right to disconnect

An interesting concept that was mooted by Labour MP Melvin Yong was to consider implementing a “Right To Disconnect” law where workers and employers would have to “negotiate the protocol for non-emergency calls and non-critical emails outside of working hours”. This concept is not new – with countries such as France, Germany and Italy implementing some form of laws to safeguard the right to disconnect outside of working hours as a human right.

He cited findings that overworking actually reduces productivity and argues that having protected after-office periods would mean more well-rested employees who are more productive and better able to contribute creatively at the workplace.

In a recent Facebook post, he mentioned that the National Trades Union Congress had pushed for a Work-Life Harmony policy to be included in the Tripartite Advisory on Mental Well-being at Workplaces.The advisory has practical guidance on measures that employers can adopt to support their employees’ mental well-being while providing resources employers, employees and self-employed persons can tap on.

“With clearer guidelines, our unions can start a conversation with employers on the protocol to answer non-critical work calls and e-mails outside of working hours, as well as the provision of appropriate help for those facing workplace burnout, while keeping their identities confidential”

While technology has brought with it some flexibility with workers being able to work from home and on the go, it has also taken away the distinct boundaries of work, causing more PMEs to work well past office hours. This absence of limits could have dire consequences if not curbed. It is heartening to see that the union has stepped up to shape a safer work environment that is focused on the mental wellbeing of its workers. I’m excited to see where this first step leads us.

May 13, 2022
PrevPreviousMaking a case for the cleaners through the Progressive Wage Model
NextLimousine driver turned swabber wants to integrate nursing with drivingNext
On Key