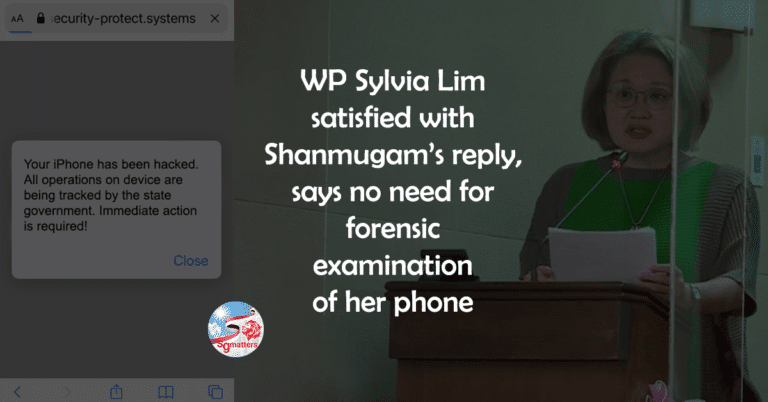 The anticipated drama did not happen after all and Singapore is spared being dragged through the mud of another political game.

Workers’ Party MP Sylvia Lim met the Police on 23 February 2022 at the Police’s request regarding a notification that appears similar to what Apple had sent to various Apple phone users, the Police said in a media statement released today.

During the meeting, she informed the Police that she was satisfied with Minister for Home Affairs K Shanmugam’s answer to her question in Parliament on 18 February, and that she did not wish to pursue the matter further.

Accordingly, she did not file a Police report, nor did she require any forensic examination of her phone.

As such, the Police will treat the matter as closed.

During the debate in Parliament (18 Feb) on the government’s use of spyware, Ms Lim had asked if the Singapore state agencies were trying to hack her phone.

She said she had received a warning notification from Apple that her iPhone has been the subject of hacking by state-sponsored attackers. The warning also said that it is likely to be because of ‘who I am individually or what I do’.

Home Affairs and Law Minister Shanmugam responded in Parliament that the Singapore government did not hack her phone. However, he said he would like to see the precise notification Ms Lim received, whether it was a general notification or a specific notification to Ms Lim’s phone.

The Government would be very interested if it was a specific notification because MPs are high value targets, and it is important for security agencies to be very aware if any of them had been approached or suborned by foreign agencies.

Following this, Mr Shanmugam had directed the Police to get up in touch with Ms Lim. The Police then wrote to Ms Lim to inform her that she could either file a Police report, or alternatively, Police would facilitate forensic examination of Ms Lim’s phone.  A commercial organisation with expertise in the field would be engaged to do the forensic examination.

The Police had also told her that Police would put in place a secure, auditable and transparent process for the commercial organisation to handle and examine her phone.

With the matter closed, we will never know the precise notification she received from Apple. Read also  On Pritam Singh, playing victim and absence of shame in the Raeesah saga

Read also  ‘Operating brain’ Pritam to be referred to the Public Prosecutor; actions against Sylvia Lim to be deferred.

May 13, 2022
PrevPreviousOn Pritam Singh, playing victim and absence of shame in the Raeesah saga
NextA poisonous shrimp. Lee Kuan Yew: “We are what we are because we can stand for ourselves. If we can’t, we’ve had it.”Next
On Key