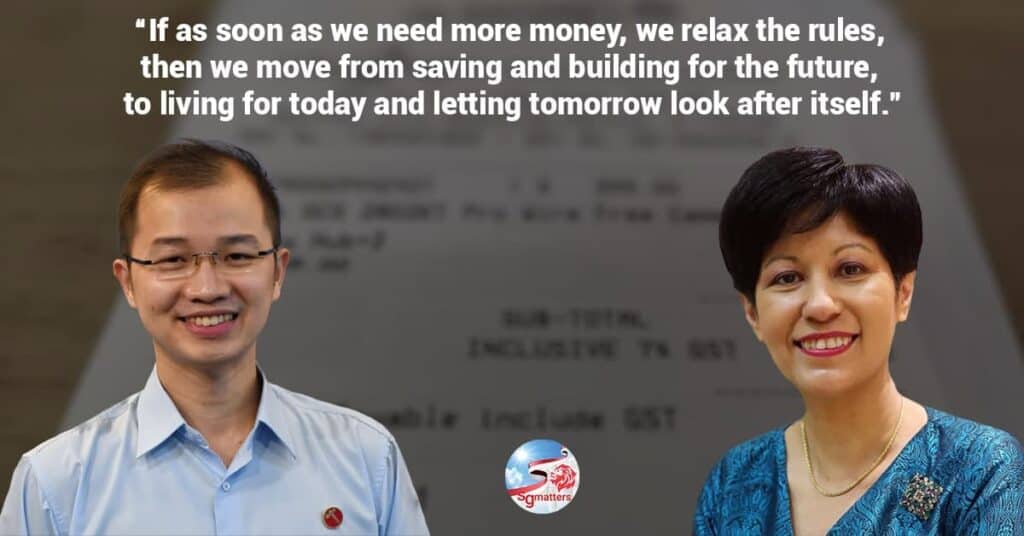 When recurrent or operating expenditure goes up – such as salaries and subsidies – income will have to be increased to meet the increased expenditure so that you do not go into debt. That’s pretty straightforward, isn’t it? This is called living within your means. You can’t sell assets to fund your daily expenditure. It’s the surest way to deplete your wealth and go bankrupt eventually. But that’s exactly what WP suggests – to sell land to fund increased recurrent expenditure.

2020 saw many economies in the world devastated by the pandemic, leaving deep scars. Some will probably not recover from the deep scaring.  Singapore has been spared the deep scars seen in other economies. This is due to the tremendous fiscal policies taken by the Singapore Government in 2020. The Singapore Government acted swiftly and decisively and bought time for businesses, helping them to restructure and pivot to new areas, and jobs were saved.

Years of fiscal prudence since independence, and the stubborn refusal to bow to political pressures to spend on populist measures have resulted in an accumulation of vast strategic reserves that give the Government the wherewithal to act with boldness. As  Joseph Incalcaterra, HSBC Chief Economist for ASEAN pointed out in an interview with CNBC, Singapore was able to spend liberally to get itself out of the crisis thanks to fiscal prudence and the accumulation of Strategic Reserves.

WP did not expect a pandemic of this proportion

Before the pandemic, no one could imagine a crisis of this proportion. The WP certainly did not anticipate a crisis that could eclipse the global financial crisis of 2008/9. In fact, just last year, when the first budget to tackle the crisis was debated in Parliament, WP Leon Perera even suggested that the government should grow our reserves at a slower pace, saying that the government was ‘too prudent’. He said that the during the ‘worst crisis’ since the Great Depression, i.e. the Global Financial Crisis, the government drew down only a tiny fraction of the reserves. He was arguing for the use of more reserves for recurrent expenditure.

The Singapore Government did not expect this pandemic either. But the difference is that they were always preparing for the worst and did not use past crises as the yardstick to measure the size of future crises.

And even as the world continues to grapple with this pandemic, countries including Singapore are preparing for a crisis bigger than this pandemic. Disease X, the next pandemic.

Hopefully the lessons learnt from this pandemic will stand us in good stead to be prepared for the next – bigger – pandemic. But one can never tell the future. As DPM Heng will tell you, no strategic reserves are ever too large or too vast to be so comfortable that you can then sit back and draw from it to avoid raising taxes.

But sadly, the next pandemic is clearly out of WP’s focus as they continue their populist run.

Parliament moved to Facebook when Workers’ Party decided to laid out their reasons why they oppose the impending GST hike on Facebook instead of Parliament where they have been elected to speak.

They claimed the government has huge cash surpluses than presented in Parliament and a GST hike was not warranted. But when Parliament met again, they did not raise this point. Why not?

It was left to PAP MP Mr Liang Eng Hwa to ask in Parliament on 5 April whether the cash surpluses that the Government has give them more fiscal space than they had stated in their budget statements and whether the planned GST hike was needed.

Second Minister for Finance Indranee responded and pointed out that Workers’ Party had made a misleading post on social media and presented an inaccurate position of Singapore’s fiscal position.

Not all cash receipts represent revenue for spending, Min Indranee pointed out. Actually, any economist will tell you this also.

As Min Indranee explained, there is a distinction between cash receipts and revenue for spending. Cash receipts reflects all the cash that comes in. This includes proceeds from the sale of land.

The sale of land merely transforms an asset to cash. It does not generate new revenue for spending.

Min Indranee said that state land that are not due for immediate development are typically leased out for interim use. This yields revenue for the Government too, in the form of rental income. But the sale of land does not increase the Government’s revenue, and if we were to spend all the proceeds from land, it would deplete our store of wealth, she said.

If you have a piece of land and you sell it for cash, you may have a large amount of cash to spend for the immediate present. But once the cash is spent, your wealth is gone and you are left with nothing. But if you re-invest its proceeds and use its investment returns instead, you generate a stream of steady income for the future.

This is why proceeds from land sale is not directly used  for budget spending. Instead they are re-invested together with the rest of the reserves, and part of the investment return is then used to support the spending needs of Singaporeans via the Net Investment Returns Contribution (NIRC).

Pointing out that the NIRC is now the largest single source of Government revenue, supporting about one-fifth of the country’s spending needs, Min Indranee said: “This is only possible because of the prudent and disciplined approach we have taken to building and protecting both our land and financial reserves.”

Populism is shortsighted because it looks to satisfy only the present. If proceeds from land sales are used directly for spending as suggested by WP, it will negatively impact the size of the NIRC for budget spending in the future.

Is GST a regressive tax?

“GST is often seen as a regressive tax. But in fact, if we look at the overall balance of what people pay and what people get, we have turned it into a very progressive system,” said Mr Heng at a forum in February.

The S$6 billion Assurance Package announced at Budget 2021, will provide “very significant support” for households. For the lower 20 per cent of households it is equivalent to not paying the increased GST for 10 years, and for the average household, it’s five years.

Wealth transfer such as the Workfare Income Supplement which the lower income workers enjoy, is essentially a negative tax. The lower income group aslo gets rebates in Service and Conservancy charges, through the GST vouchers U-save and other subsidies.

WP MP Louis Chua asked if raising GST is the best way to increase revenue and suggested relooking into the NIRC framework.

In 2015, a constitutional amendment was passed to add Temasek to the Net Investment Returns framework. This resulted in a significant increase in NIRC.

The current framework divides the Net Investment Returns Contribution by 50:50, 50% to be used for the present, and 50% to be reinvested for the future. This is fair to both present and future generations of Singaporeans. The proportion is arrived at after very careful considerations. It is not casually decided upon.

In which other country are citizens able to reap the benefits of past savings in this way?

“In most advanced countries, citizens today pay for the spending of the past generations. In Singapore, it is the reverse. Citizens today enjoy the benefits of the savings from the past, thanks to the foresight and policies of our founding generation of leaders and people.”

We are stewards of the reserves for future generations, just as our forefathers have done for us. Back in 2018 in Parliament, DPM Heng Swee Keat urged MPs not to chip away at our strategic national assets. To amend the rules as a first resort is ill-disciplined and unwise, he said then.

“If as soon as we need more money, the first thing we do is relax the rules, that is the surest way to change Singapore’s basic orientation – from saving and building for the future, to living for today and letting tomorrow look after itself.”

Let us take heed not to chip away at our strategic reserves. We have not seen the worst of crisis even if this present pandemic is unprecedented. As our forefathers had done their part for us, let us do the same for future generations of Singaporeans.