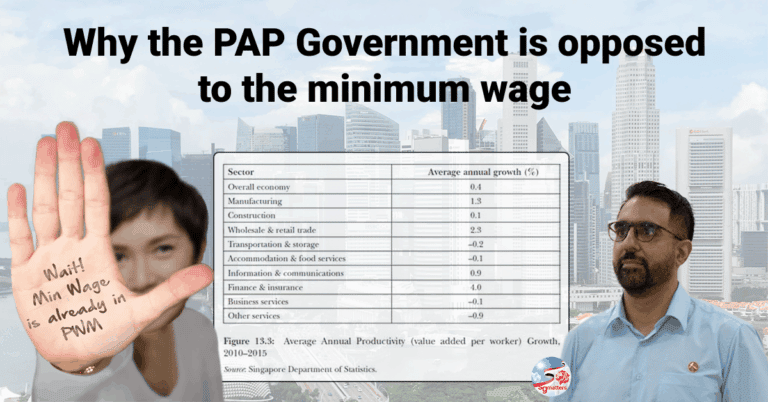 The PAP’s vehement opposition to the MW is best understood if you situate it within its broader policy campaign with total factor productivity (TFP) growth, a perennial issue that both the Opposition has raised on several occasions and that the govt themselves have acknowledged as a struggling problem.

Since 2010, billions of dollars have been spent across 16 different sectors in a bid to drive up TFP, yet the overall impact on productivity growth has been lacklustre: 0.4% against the govt’s own stated targets of 2-3%. (See table) 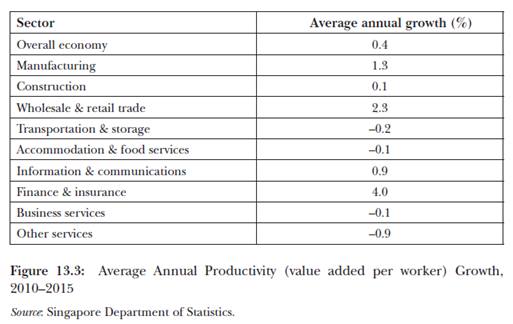 With the exception of financial services, most industries experienced sluggish TFP growth, while some such as transportation and accommodation/food services even had negative growth. Overall TFP was down for the first time in 2019 (MP Vivian Balakrishnan acknowledged this in the GE debates), which suggests there hasn’t been much improvement beyond 2015.

There are, of course, many good reasons to question the use of TFP metrics to measure wealth gains. For instance, TFP cannot capture many intangible wealth gains from new technologies, such as Uber reducing cab waiting times, or Google reducing the costs of information search. (For a better idea of the methodological critiques of TFP, read: Silicon Valley Doesn’t Believe U.S. Productivity Is Down)

Minimum wages do not help towards TFP growth

But the crux of the matter is this: political discourse in Singapore (and almost everywhere else!) pivots around the metric of TFP growth. Both the WP and SDP has lambasted the PAP on several occasions for its failure on this front, and rightly so.

In light of this, it is very obvious why the MW is undesirable from the PAP’s perspective. Minimum wages DO NOT help towards TFP growth, and I sincerely hope that even its supporters can be honest enough to acknowledge this. It is one thing to champion the MW on a moral platform, but quite another to say that it helps toward growth – which is most definitely false.

At best, MW laws can be characterised as a mandated wage-price floor that manifests as a form of wealth redistribution. Some low-skilled jobs will be lost, while other jobs will be entrenched. The exact winners and losers completely depend on the context of these industries. But. It. Does. Not. Grow. The. Economy. The pie of wealth is not enlarged. (If it does, raise it to $100/hour, and we shall all prosper.) Put it in place long enough, and the pie will in fact begin to crumble.

Now can you see why the govt rejects a blanket MW, in favour of the hybrid Progressive Wage Model? Can you see why the latter is designed the way it is – to ensure wage increases are contingent on skill upgrades? The economic logic of an MW is directly contradictory against its broader goal of pumping up TFP growth, a standard by which even the govt’s own critics hold it harshly against.

Here’s the other thing. It is not as if the PAP actually believes the PWM is going to drastically budge the productivity needle. The PWM is just one productivity-based policy out of dozens that the PAP has implemented since 2010.

See this LKYSPP paper for a summary:

So it is better to think of the PWM as the govt straddling the middle ground between recognising that low-wage workers do have genuine problems amidst rising costs of living, and recognising that we shouldn’t take our eye off the problems of sluggish productivity growth. (It might be hard for someone like Charles Yeo to believe, but yes, PAP ministers happen not to be heartless)

Of course, the Opposition has the supreme luxury of wagging an accusatory finger at sluggish TFP growth, while simultaneously championing an MW and a whole host of other anti-growth policies (such as carbon taxes and immigration restrictions), never having to really explain how the underlying economic logic of their proposed policies, and how it would be reconciled with the goal of growth should they hold the reins.

But as the incumbent govt who will be judged based on its actual performance, they don’t have that political luxury of fancy rhetorical tricks or the adoption of politically popular but anti-growth policies, which is why a blanket MW is simply out of the govt’s policy agenda.

May 13, 2022
PrevPreviousWP Jamus Lim is ‘politicking, and pulling a fast one over your eyes – plain and simple’: Donovan Choy
NextPritam Singh: companies profiting off the backs of PWM for lift sector with increased price bidsNext
On Key