Pauline India apologises, says not aware ‘We can achieve’ is Singapore’s national song 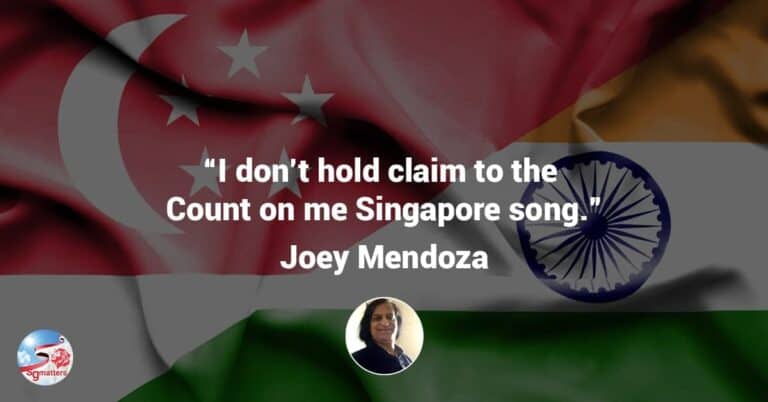 Pauline Communications which produced the song “We Can Achieve” said that that they were not aware that the song was plagiarised from a Singapore national song sung on Singapore’s National Day since 1986.

In a Facebook post, the company said it had produced the song with the help of a Mr Joey Mendoza ‘who sold the copyright of the lyrics and music to us, claiming he owned it.’

The company issued a Facebook apology after discovering that the song was 99% copied from Singapore’s national song “Count On Me, Singapore“.

It has come to our notice that the Song “We Can Achieve” in CD (1999) “We can Achieve – Inspirational Songs for Children and All” by Pauline Communications has some copyright issues with regard to the lyrics and music of the same. It seems that it has been copied 99 % from the Song “Count on Me Singapore”. Song and Lyrics by Hugh Harrison and sung by the Singaporean Clement Chow in a TV programme.

We would like to inform you that we had produced this song with the help of Mr Joey Mendoza who sold the copyright of the lyrics and music to us, claiming he owned it. This was in 1999 when we brought out the CD “We Can Achieve. We were not even aware, that this song has been the National Day Song of Singapore since 1986. We had uploaded it on SoundCloud in 2012 in the album “We stand United” which was a collection of patriotic songs from our various CDs produced by Pauline Communications, India.

Guess what? Joey Mendoza decided to respond to Pauline India’s post, insisting that he composed the song in 1983. He claimed that he was not aware of “Count on me, Singapore” until 2 days ago.

Interestingly, he also said, “I don’t hold claim to the Count on me Singapore song.” Well, the two songs are almost 100% identical word for word except for ‘Singapore’ and ‘India’. If Joey had composed the song in 1983, why wouldn’t he  boldly hold claim to ‘Count on me, Singapore’?

Meanwhile, here’s what the composer of “Count On Me, Singapore”, Hugh Harrison has to say:

“From what I saw, Joey messed up when he transcribed the lyrics and wrote ‘We are told no dreams to hold that we can try for’.

What does that mean? I guess you would have to ask Joey.

The fact is, the song evolved both lyrically and melodically over several months with input from both the government, the agency and the musical production team.

All these stages of development are well-documented. It would certainly be a wild coincidence after all the changes that took place that we happened to land exactly on Joey Mendoza’s version. I think he would have a hard time producing any evidence of the creation, performance or production of the song in 1983.

In fact, it would be impossible since COUNT ON ME SINGAPORE did not exist prior to 1986 and was composed specifically for Singapore with input from Richard Tan of MCI, Brian Watson from McCann-Erickson, Jeremy Monteiro and numerous others. 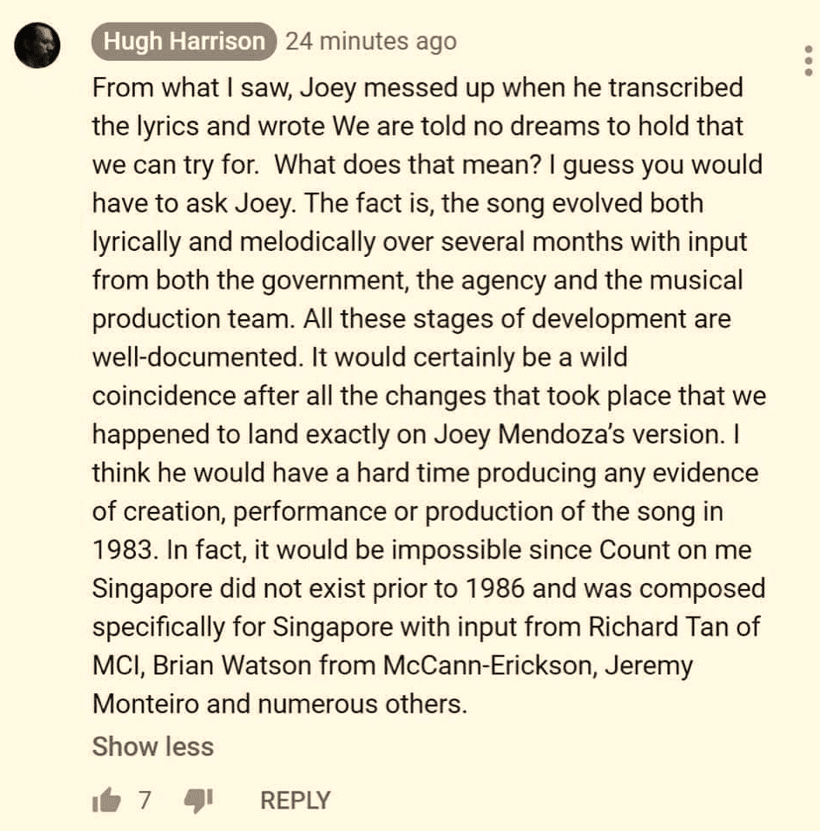 In a statement to media on Tuesday, 16 March, Joey Mendoza said that 250 orphans are living proof that he composed the song in 1983. He also claimed that the original tapes of his composition were swept away in the 2005 Mumbai floods. Joey explained the similarities between the two songs as coincidence as there was no internet access back in the 1980s.

“There was no way I or the other composer could know that things would look so similar. (And no INTERNET ACCESS) With due respect to the other composer there are so many phrases that musically were connected and it could be all coincidental,” he said.

In a youtube comment on the song, Huge Harrison who is Canadian said, “The fact that he is claiming now in 2021 that he is the original creator of the song, implying I copied the song from him, is a direct attack on my integrity and professionalism and for that he could be sued for slander and/or libel.

“As it stands now, I have written him and given him the opportunity to rescind his claim and am awaiting his response.”

May 30, 2022
PrevPreviousFamily support is strength in trying times: PM Lee’s New Year message
NextJoey Mendoza makes u-turn on the song, apologises for the confusionNext
On Key