Tharman to Jamus: avoid strawman arguments and don’t assume you have a monopoly in compassion 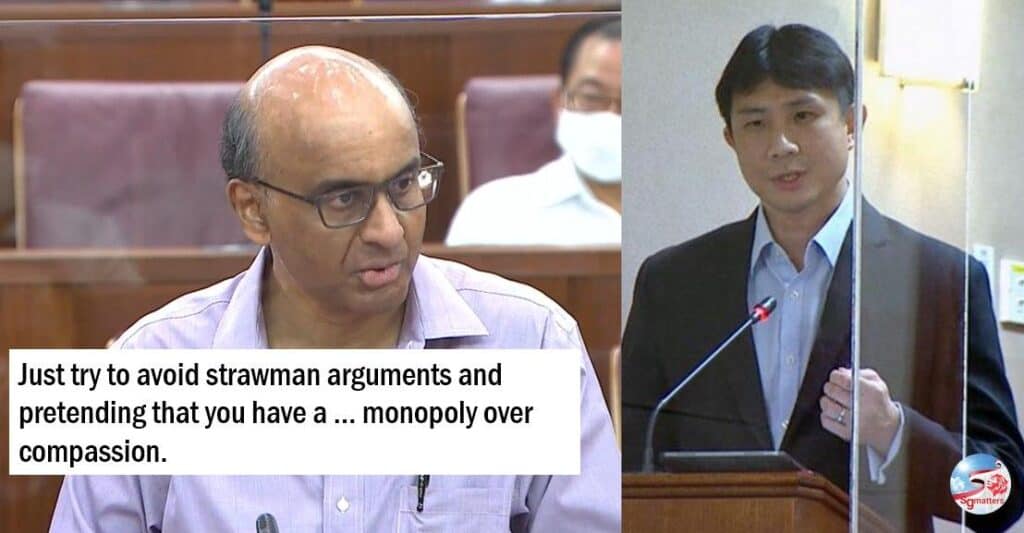 Senior Minister Tharman Shanmugaratnam said no one should assume that he has a monopoly on compassion after WP Jamus Lim’s speech on the minimum wage which saw an exchange between him and 5 PAP MPs.

The senior minister said the Government really believe that it is important to raise the wages of the lowest-paid workers.

Significant progress has been made in the last 10 years, and the government think they should go further, Mr Tharman said.

Mr Tharman explained that the PWM model is a Minimum Wage Plus with a sectoral approach.

This approach is a sensible one and has a lot to commend it because ‘it allows you to set the minimum rung that is not so low and not so high’ because if you have a single level, you have to decide where to pitch it.

Don’t assume you have a monopoly over compassion

None of us has a monopoly over compassion, the minister said.

“I say this not to discredit anyone. In particular, I really respect where Jamus Lim is coming from,… but no one should assume that you have a monopoly over compassion,”

“Also, and here’s a bit of advice. Try to avoid strawman arguments, like saying that the government is only interested in efficiency and not equity. That’s frankly laughable.

“Try to avoid that manner of an argument of painting everything in binary terms. It’s usually not necessary to reply but I say this as a piece of general advice.”

Raising the living standard of the poor is a complicated matter

“Raising the standard of living of the poor is a complicated matter.

“And I say this, by the way, as an economist, as someone who studies overseas’ experience very carefully, and who, together with my colleagues, is a practitioner. How do we do it without losing that wage-earners ability to have the pride of having a job and earning a wage?”

How the Government does it

“We do it through the Progressive Wage model which has to be expanded, we do it through Workfare, we do it through a range of other subsidies, whether it’s KiFas, the housing subsidies and many other ways. And it’s not a job that’s done for good. We have to do more, and many of the speeches that we’ve heard in the last few days were about how we can do more in a way that really helps those we’re trying to help.

“But just try to avoid strawman arguments and pretending that you have a monopoly in compassion.”

A small point in the conclusion

“And by the way, it’s a very small point, I’ve never heard economists cite university as a source of research, be it a well regarded or not well-regarded university. Individuals do research and it may be very credible research but universities don’t publish research.”