Through The Eyes of SIEU Union Leader, Luke Hee 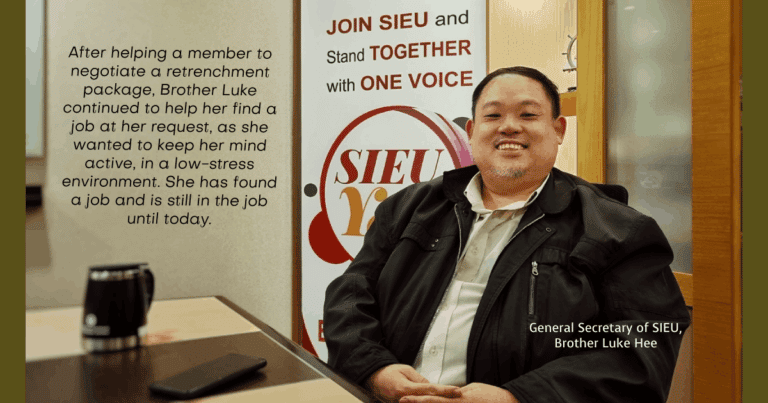 Despite Luke’s relatively youthful looks, this Union Leader has been with Singapore Insurance Employees’ Union (SIEU) since Jan 2000.

Having served about 13 years as Deputy General Secretary and later took over as General Secretary of the SIEU in January 2013 to present, Luke is now a member of the NTUC Central Committee — the highest decision-making body of Singapore’s Labour movement.

According to him, the Labour Movement is not the same as it was when he first started. He opines that unions have been going through an ‘evolution’ — contemporary socio-political problems have compelled unions to transform to better serve their members’ needs.

He adds that the labour movement is a voice for workers and members, and members must be organized and have strength in numbers to voice concerns as one.

COVID-19 Pandemic: a crucial period for unions to step up

The COVID-19 pandemic has caused great economic instability, and Luke believes that this is a crucial period for good leadership within unions to step up and serve members when they need help the most.

Luke shares how union membership fees are pit together to help members tide through their own individual shares of ‘rainy days’.

Luke is particularly concerned about Professionals, Managers, and Executives (PMEs) today, in safeguarding their employment and welfare even amidst the pandemic.

As General Secretary of SIEU, Luke shares that many insurance companies in Singapore are international companies and it is often difficult to control their decisions. When Singaporeans in the insurance sector face retrenchment, it is where the important role of the union comes in — to negotiate the best deal for its members. Unions play an advisory role to their members, Luke shares. But he adds that the decision is ultimately to be made by its members and unions will stand by them to advise them in their best interest.

A particularly memorable experience for Luke was a time where he was negotiating a retrenchment benefit for an SIEU member. She was retrenched by her Japanese insurance company and offered a handsome six-figure retrenchment payout.

Luke believes that while it is important to keep their members’ jobs, the focus should not always be about work prospects or keeping unemployment low, but an overall consideration of all aspects. The member did not take the retrenchment too heavy to heart but considered her situation thoroughly.

She was single, nearing her 60s, and was caring for an elderly parent. She figured that continuing the high-stress job would not be in the favour of her health, should she develop any stress-related health condition years down the road. Her good spending habits were also taken into consideration.

Overall, with all points considered, accepting the retrenchment package seemed like a ‘better deal’. Luke respected her decision and went on to negotiate more favourable terms.

After accepting the retrenchment package, Luke continued to help her find a job at her request, as she wanted to keep her mind active, in a low-stress environment. She has found a job and is still in the job until today.

What can the unions do for the PMEs?

Luke also shares that the problems PMEs face today are not easy to solve.

A future challenge facing unions is how to engage a workforce that is increasingly made up of PMEs. Even within PME as a broad category, not all PMEs are the same. Luke feels that PMEs should be given proper recognition for them to seek protection from unions. Unions are critical in engaging companies to debate their practices and policies in order to create progressive practices and better policies which will benefit workers and employers alike.

June 6, 2022
PrevPreviousMaking Singaporeans winners by enabling them to succeed: Tan See Leng
NextWomen in the workplace – Do employers see them as assets?Next
On Key