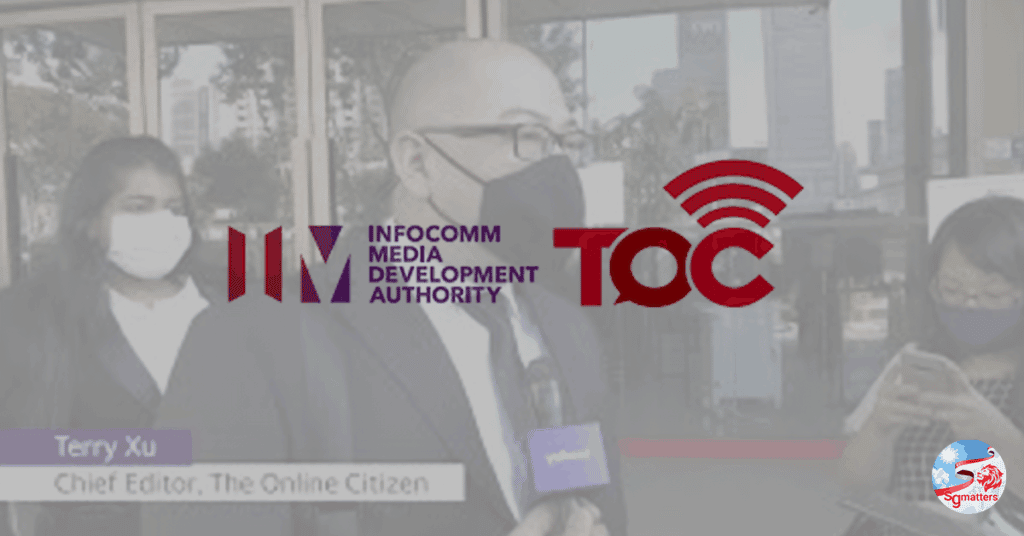 The IMDA said in a media release that it has suspended The Online Citizen Pte Ltd’s (TOC) class licence to operate its websites, as well as its social media channels and accounts from 14 September 2021. The licence may be cancelled if TOC does not provide further information on its funding sources to comply fully with the Broadcasting Act.

The suspension comes as no surprise as The Online Citizen had communicated to the IMDA that it did not intend to comply with the Broadcasting Act to be fully transparent in declaring its sources of funds.

With the suspension, it means that TOC would have to stop posting any more articles on its websites and its social media channels and accounts such as its Facebook and Twitter pages. TOC will have to disable them by 3 pm on 16 September 2021. It is also not allowed to operate any new licensable broadcasting services online.

Continuing to operate these services is an offence and their officers may also be held liable, the media release said. In the event that TOC fails to comply, IMDA may take steps to restrict access to these services.

The Broadcasting Act requires Registered Internet Content Providers such as TOC which engage in the online promotion or discussion of political issues relating to Singapore, to be transparent about their sources of funding. This is to prevent such sites from being controlled by foreign actors, or coming under the influence of foreign entities or funding, and to ensure that there is no foreign influence in domestic politics.

When TOC was first registered in 2018, it had declared its funding sources. Since 2019, however, TOC has not fully complied with this obligation. It was issued a warning on 4 May 2021 because it failed to verify a donor and to clarify discrepancies in its foreign advertising revenue in its 2019 declaration.

Despite multiple reminders and extensions, TOC had repeatedly failed to declare all its funding sources for its 2020 annual declaration.

The licence allows for subscription as a revenue model. IMDA had repeatedly asked TOC to clarify various elements of its subscription framework.

It is, as IMDA said, a cause for concern as it could be an avenue for foreign influence.

The Online Citizen had tried to negotiate with IMDA, offering to provide the ‘necessary declaration’ on condition that IMDA gives assurance that it would not seek further clarifications regarding its subscription framework and its funding sources.

This, of course, was rejected by the IMDA which said that full transparency is a requirement by law and not a matter for  negotiation.