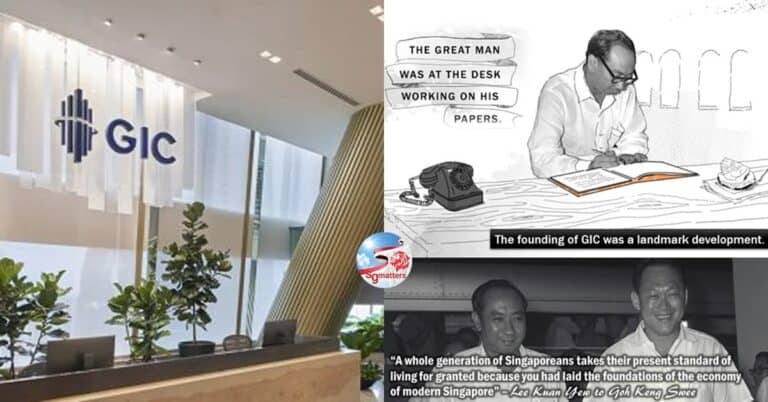 The creation of GIC 40 years ago in 1981 was a far-sighted, original and bold move. At that time, sovereign wealth funds did not exist. GIC was the brainchild of Dr Goh Keng Swee who was at that time Deputy Prime Minister and Chairman of the Monetary Authority of Singapore.

Central banks seek macroeconomic and financial stability while investment management entities strive to exploit the opportunities arising from economic and financial volatility. There thus exists an inherent tension between keeping reserves liquid so as to manage the exchange rate, and using the reserves to generate higher returns. Dr Goh, therefore, decided that MAS was not the best entity to manage the country’s foreign reserves to achieve long-term returns.

For this reason, GIC was created to manage and invest the foreign reserves that were in excess to what the MAS needed to manage the exchange rate. While MAS would keep its own foreign reserves liquid, the new company, GIC, would be free of liquidity constraints and would thus be able to invest in long-term assets with a view to capital appreciation.

The genesis and development of GIC is part of a larger narrative of how Singapore has managed its reserves, since it gained its independence in 1965, for the benefit of Singaporeans over the decades.

Today, GIC is one of the best regarded sovereign wealth funds in the world. It has 10 offices in different cities on most continents, and invests in 40 countries and multiple asset classes. 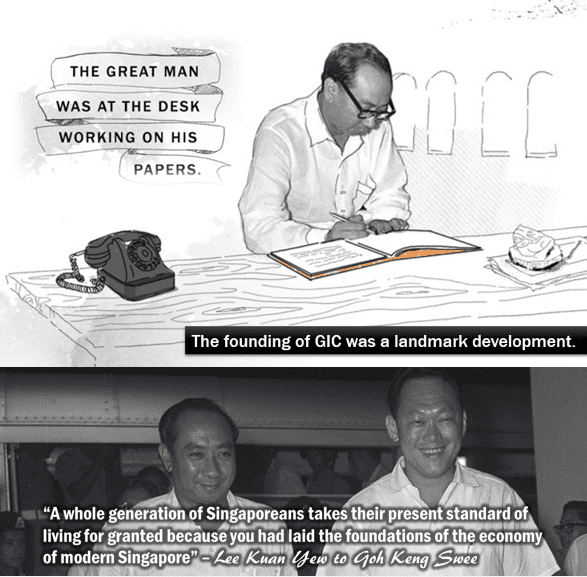 What factors have contributed to GIC’s success?

In his speech at the 40th Anniversary of GIC, PM Lee Hsien Loong who is also Chairman of GIC, listed four factors.

1. Meritocratic principles and a top-notch team

The mission for GIC was clear and focussed: to manage our reserves professionally. And the team comprised a strong Singaporean core of highly competent professionals, reinforced and complemented with talent from around the world. They provided effective leadership at all levels to take GIC forward.

GIC started out with a largely US and British centric portfolio, and expanded its geographical coverage as new market opportunities arose, stepping up investments in Western Europe and emerging Asia, most significantly in China.
“It developed new investment capabilities, including in private markets and green assets. In response to secular megatrends like technological disruption, GIC is also investing more in enterprise technology, innovative healthcare, digital services, and logistics, “said PM Lee.

GIC approached its investment mandates systematically, with ample thought and caution.
“It neither adopts a zero-risk mindset, nor does it chase maximum returns heedless of risk,” PM Lee said. “The government sets the risk parameters for GIC, and GIC then designs and manages a portfolio mix of different investment classes to achieve the best possible performance within these limits.”

4. Core values and a strong sense of stewardship

GIC is anchored on its core values, encapsulated by the acronym PRIME – Prudence, Respect, Integrity, Merit and Excellence.

“These were imbued in the organisation from the very start by its founding chairman, Mr Lee Kuan Yew,” PM Lee said. “GIC is not just a global fund seeking to make returns, but a public institution with a strong sense of national mission and stewardship.”

GIC operates with a commercial mandate, free from political interference.

The roles of the Board and management are clearly separated. The management team is entrusted to make investment decisions objectively and professionally, free from political pressure.

“On its part, the political leadership stands by GIC and defends GIC’s ability to make investment decisions independently, so long as it has acted properly and competently. And it stands by GIC even when the ex-post outcomes turn out unfavourably, which will happen from time to time for any serious investor,” said PM Lee.

Because the Government operates a balanced budget in normal years, GIC has confidence in the stability of funds entrusted to it, and can confidently invest these funds for the long term without worrying that its funds will be withdrawn frequently and at short notice.

GIC has lived up to its mission

“In achieving its mission, GIC has protected, preserved, and enhanced the value of Singapore’s reserves. This has enabled us to build up a valuable nest egg. To make up for the oil, the gems, the timber and all the other natural resources that we do not have. Our reserves have become a strategic resource for Singapore, and during critical moments, this has made all the difference.”

“And this stable position enabled us to press ahead with bold banking reforms in the midst of a raging storm, instead of having to hunker down and wait for the sky to clear. We gained precious ground on our competitors, and emerged in a much stronger position competitively after the crisis ended,” PM Lee said.

Fortunately, our banking system was sound and well-supervised. None of the banks and bank branches operating here ran into trouble. There was no need to draw on the guarantee, and the SGD 150 billion stayed intact in our reserves.

While the bank guarantee was not drawn upon, the government did tap on the reserves to draw $4.9 billion from the reserves to support businesses and workers through schemes like the Jobs Credit to save jobs. The schemes worked. The economy rebounded quickly once the crisis had passed. And the government waw able to pay back every dollar into the reserves during the same term of government.

In this current ongoing COVID-19 pandemic, our reserves are once again the bulwark that sees Singapore through safely. This pandemic is a crisis on an even larger scale that the Global Financial Crisis. Countries have had to close borders and lock down daily activities, severely affecting economic production last year. This wreaked havoc on economies and on people’s lives everywhere. Many countries, including Singapore, had to implement massive fiscal packages to preserve livelihoods and jobs.

“But whereas other countries had to borrow or print huge amounts of money to finance their interventions, Singapore was able to rely on our reserves. We did not need modern monetary theory. We budgeted more than SGD 50 billion for schemes to support businesses and workers. At the same time, we pressed on with longer term programmes. To transform our industries, help companies develop new capabilities, and upskill our workers in growth areas. To position ourselves to emerge stronger into the post-pandemic world.”

In ordinary years, too, our reserves play an important role. They provide a steady stream of income for budget spending and gives the government additional fiscal space to invest in priority areas such as education, healthcare and infrastructure.

Up to 50% of investment returns from our reserves contribute to the government’s annual Budget. The amount contributed by our reserves is about 20% of annual revenue. This is much more than GST, or corporate income tax.

“If Singapore did not have substantial, well-managed reserves, our situation – whether in crisis or in peace time – would be much more difficult.”

Read also  Jamus' idea to reveal the size of reserves is baffling: reader

May 13, 2022
PrevPreviousSecurity Officers Exploited? NTUC And Union of Security Employees: Come to us if you have information on illegal practices!
NextWe need FICA because small states like Singapore are often pawns in a game of global influenceNext
On Key