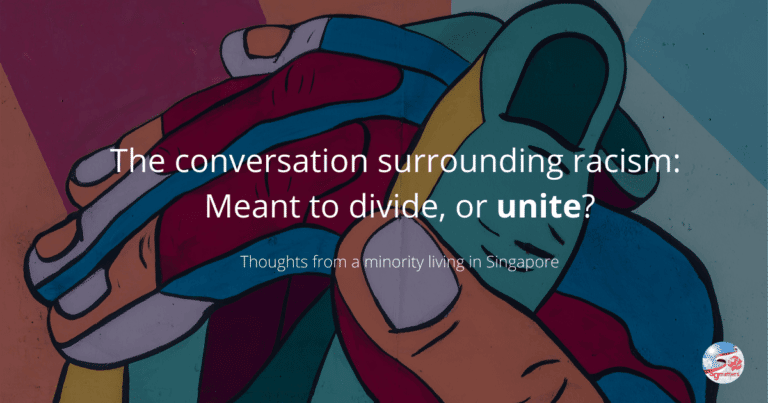 Thoughts from a minority living in Singapore

The feeling I get everytime I open my social media apps: Dread.

Why? The never-ending slews of online debates regarding race, people coming forward to talk about their experiences with racism – doesn’t matter if it’s a minority or a majority – it seems like the R word is everything that everyone can talk about.

Each Instagram story I scroll past or tap through are repostings of racial conversations – the most recent being the PA vs Sarah Bagharib issue that ensued for a good month. A video depicting the ignorant reaction of a gong-banging Chinese neighbour towards an Indian household who was peacefully conducting their religious rites.

Lets not forget the opinions of the woke mob – which often comes in the form of Twitter threads – spreading their semi-radical opinions on adopting ideologies and racial attitudes from the West. Or even trying to apply socio-political theories to various racial situations in Singapore.

The thing is, when individuals, or activist pages write such content, I’m pretty sure they have this noble intention of trying to raise awareness of the social issues surrounding racism such as – micro-aggressions, internalised racism, structural racism, etc. I personally enjoy reading such content because it helps to raise awareness and educate the wider public about such terms, occurrences and actions that we subconsciously do/partake in.

But when does it become a problem?

It becomes a problem when our majority friends have to walk on eggshells voicing out their opinions. A question or a clarification can turn into a “cancelling” session really quickly because we’re so quick to label their opinions as “racist”.

It becomes a problem when our minority friends are so quick to make the sweeping statement “Oh, but then again all Chinese people are like that what ”, when I have friends from the majority race who want to become allies and understand the problems that we face. Plenty of folks from the majority race also want to help be a voice for the minority community when we experience blatant forms of racism.It becomes a problem when we think that our opinions HAVE to be taken into consideration just because we shout the loudest.

If anything, from the recent turn of events, I think we could all learn and realise that just because your post goes viral, or even if you have the largest following on your social media platforms, it doesn’t necessarily mean your message can unite or solve a certain problem effectively.

Having the loudest voice does not mean anything if you do not use that voice properly, especially online.

Addressing the issue of being penat or exhausted from having to explain ourselves.

Minorities have been using the term “Penat Lah”, which directly translates to “Tired Lah” when we talk about racial harmony. Fatigue and exhaustion from talking about racism, or having to constantly explain our racial traditions and religious practices and beliefs – is a phenomenon that minorities feel.

As a minority who grew up in a predominantly Chinese environment – I went to what was a historically Chinese secondary school (I had to sing my school song in Mandarin), I’ve had to do a lot of explaining. I had to constantly explain why I had to “pray to the wall” or why Malay makciks had to wear a piece of cloth on their heads.

I’ve also had to go through the unfortunate and arduous experience of explaining that the Quran (the central religious text of Islam), is not a bomb making manual to one of my classmates at 14 years of age.

After having what feels like endless conversations surrounding the topic of racial and religious customs, I realised that most of our ignorance (both mine and theirs) come from upbringing. We wouldn’t know the true meaning behind each others’ customs until we came face to face with a person from another race who actually practices it.

In spite of all this, my secondary school experience was a very enriching and fulfilling one. I have made friends from all races, backgrounds, sexual orientations and I dare say, this was a result of the uncomfortable (and objective) conversations we had surrounding our cultures and practices. When majority and minorities are put together in the mix, the possibilities to understand each other better is truly endless.

As a minority who had to go through 4 years of feeling awkward and out of place in a predominantly Chinese environment – I realised that only good can come out of having unbiased, constructive, calm and productive discussions with our peers from the majority race. After all, a conversation is meant to unite, not divide. We should soldier on, despite the fatigue.

So, why does it feel like a battle between the majority and minority groups these days?

On social media, everything can be taken out of context and misconstrued. The abundance of negative content that I experienced this past month was overwhelming and it got me thinking – is Singapore really racist? Why I ask… is because racism is a strong word. In other societies, racism has proven time and again to destroy civilisations and peace in a country. Ethnic cleansing, hate crimes, biased treatment from law enforcement officers – the list goes on.

In my opinion, the exhaustion that minority groups are feeling from having to explain themselves over and over again, is starting to fester. Frustrations can be felt through comments, videos, reactions, contributing to an extremely hostile environment.

What are some ways to combat this?

Recently, the Institute of Policy Studies (IPS) and the S. Rajaratnam School of International Studies (RSIS) on Friday (25 June), organised a forum on race and racism in Singapore, with Finance Minister Lawrence Wong giving the keynote speech. A panel discussion, with individuals from different races was also put together to give their opinions and thoughts on the prevalent issue. Some of the solutions that we could adopt are;

I’ll end this off with a quote that Minister Lawrence Wong reiterated in his earnest speech last Friday (25 June);

We have to find it in ourselves to stop framing the fight for true social cohesion and muti-racialism as a battle between the minorities and majority.  Singapore is a multi-racial society and always will be. We are not perfect, but if we can find it in ourselves to be considerate, kind and patient to guide each other on our road to true multi racial cohesiveness and harmony, we will get there.

May 13, 2022
PrevPreviousHe Ting Ru: Residents should clean up after themselves
NextWhat’s the journey towards endemicity like? Is the taskforce flip flopping?Next
On Key