There have been calls from some quarters – including the Workers’ Party – to abolish the CMIO classification. Some called for a relook of the model. They question if it is still relevant. Others claim that it makes us look at people through through the lens of race.

In an op-ed written for the Straits Times, Assoc Prof Eugene Tan said that while the CMIO classification matters to all community, in a significantly Chinese-majority Singapore, it matters more for the minorities.

Firstly the classification provides the assurance of official recognition for each community. Secondly, it affirms multiracialism as the foundation of the Singapore identity.

Removing the classification will raise doubt about the special position of the Malays as the indigenous people of Singapore, as enshrined in Article 152 of the Singapore Constitution, he said. How can the special position of the Malays be recognised or the interests of minorities be cared for if there is no distinction made of race?

“Getting rid of the scheme will raise disquiet among minority communities over the potential erasure of their distinct and distinctive identities, the end point of which is assimilation into the majority community,” Assoc Prof Tan said.

Being assimilated into the majority community is not how we have built this multiracial character of the Singapore society. As Education Minister Chan Chun Sing said in a recent Facebook post, our country was founded on the belief of forging unity from diversity.

This shared identity that we have is not about the cultures of minorities being subsumed by the culture of the majority, he said. Neither is it about all of us giving up our own identities.

“Instead it is about building a shared and forward-looking identity based on a common set of values, with the foundation steeped in our rich and diverse identities. And it is a legacy, that each and everyone of us must safeguard in our daily words and deeds, and through mutual respect and care for one another,” Mr Chan said. 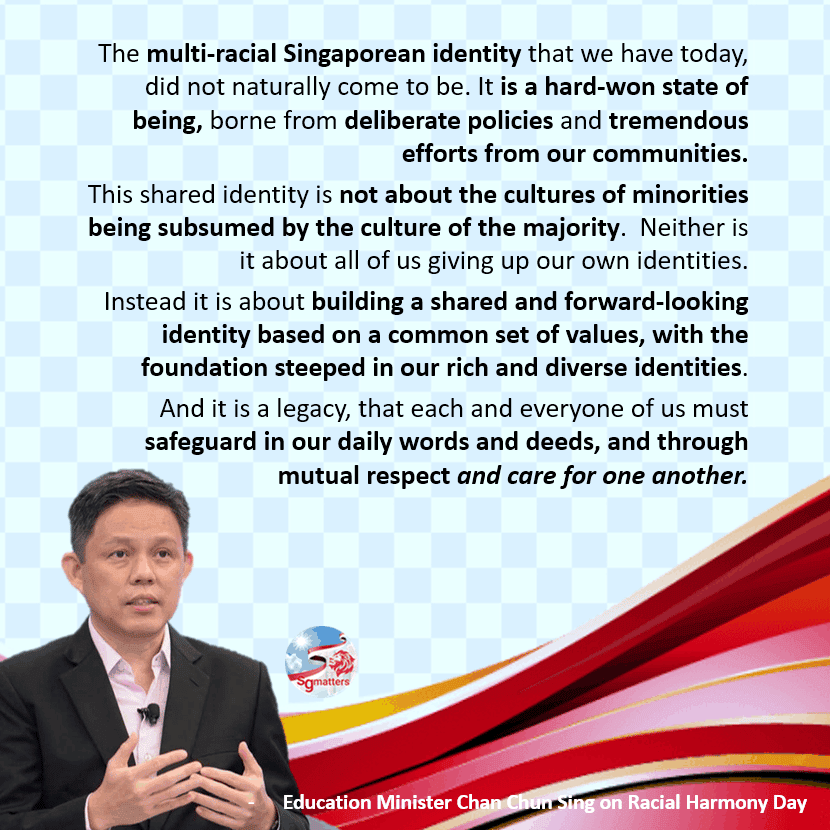