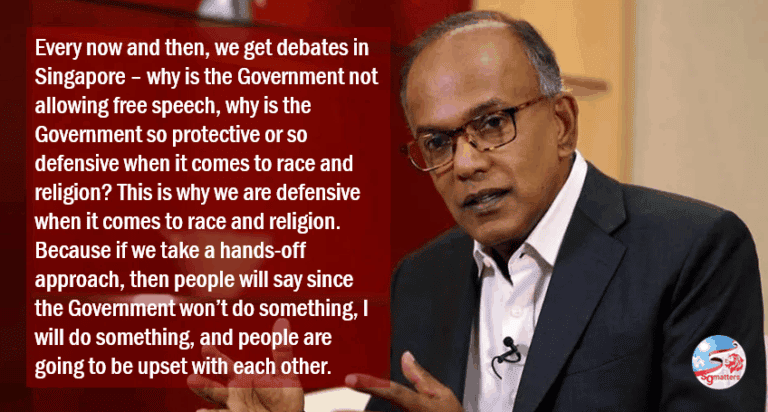 The Charlie Hebdo type of cartoons is the result of a hands-off approach by the State, Law and Home Affairs Minister K Shanmugam said.

“What has happened in France has restarted the debate on what freedom of expression means, how much you can say, and what is the boundary between free expression and your obligation not to offend someone’s religion,” the minister said.

Unlike France, the Singapore Government takes a hands-on approach to free speech and religious freedom. “Because if we take a hands-off approach, then people will say since the Government won’t do something, I will do something, and people are going to be upset with each other,” said Mr Shanmugam.

Here’s an excerpt from his speech on Singapore’s approach:

This is why we are defensive when it comes to race and religion. Because if we take a hands-off approach, then people will say since the Government won’t do something, I will do something, and people are going to be upset with each other. The national harmony will be affected, and the majority of people will be affected. Some groups will be saying yes, free speech, it’s ok, I don’t get offended, you can say what you like about the Prophet, the Pope, or God. But many other people would feel offended. So that is why we take a different approach.

We take a secular approach, so, when the Government looks at policies, we are secular. We don’t favour any particular religion, and we guarantee freedom of religion.

Because we take the position, that the right to speak freely goes with the duty to act responsibly, the two must go together.

And, as a secular Government, we are neutral in the treatment of all religions.

We also do not allow any religion to be attacked or insulted by anybody else, whether majority or minority. Same rules.

We guarantee freedom of religion, the right of every person to practice his or her religious beliefs, and we protect everyone, majority or minority, from any threats, hate speech or violence.

That is the assurance one gets in Singapore. It is also what we need to do to make sure that we preserve racial and religious harmony in Singapore.

Therefore, the Charlie Hebdo types of cartoons will not be allowed in Singapore, whether they are about Catholicism or Protestants or Islam or Hindus. Free speech for us stops at the boundary of giving offence to religion. There is a fence, and that fence protects religious sensitivities. The Charlie Hebdo cartoonists, if they were here, they would have been told to stop. If they didn’t stop, ISD would visit them, and they would have been arrested.

We believe that we can build a multi-religious, multi-racial society, based on trust, and only by taking a firm stance against hate speech, and dealing with all communities equally and fairly.

We have laws designed to ensure racial and religious harmony in Singapore. We update them regularly to make sure that they are relevant and effective as times change

May 13, 2022
PrevPreviousMoving towards Phase 3 in Singapore
NextMHA disappointed with UN’s decision on cannabis. Netizen reacts.Next
On Key