Temasek does not handle your CPF. Here’s why. 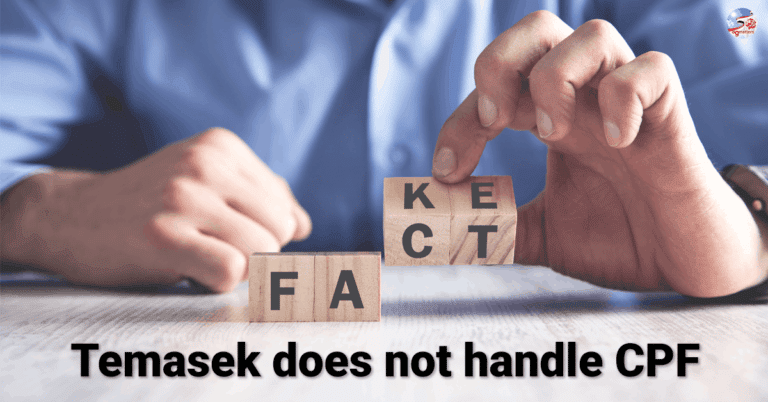 To be clear, Temasek

Temasek OWNS the assets on its balance sheet. It is an investment company, not a fund manager.

Temasek manages its own assets, which have accrued mainly from proceeds from sale of its investments and reinvestments of dividends and other cash distributions it receives from its portfolio companies and other investments.

Temasek also has its own borrowings and debt financing sources such as the Temasek Bonds and Euro-commercial Paper Programme.

This arrangement assures that the CPF Board will be able to pay its members the interest it commits to pay on CPF accounts.

What happens to the proceeds from Special Singapore Government Securities?

GIC is a fund manager, not an owner of the assets.

It merely receives funds from Government for long-term management, without regard to the sources of Government funds, e.g. SGS, SSGS, government surpluses.

Its objective is to achieve good long-term returns to preserve and enhance the international purchasing power of the reserves.

Read also  How much are you giving up in interest if you withdraw all your CPF at 55?

Temasek: not a fund manager

Unlike GIC, Temasek is not a fund manager. No SSGS proceeds have been passed to Temasek for management.

It is an investment company managed on commercial principles to create and deliver sustainable long-term value for its stakeholders. It owns the assets on its balance sheet.

Where does Temasek get its funds for investment?

Temasek investments are financed using dividends and other cash distributions it receives from its portfolio companies and other investments, divestment proceeds from sale of its investments, and borrowings and debt financing sources such as the Temasek Bonds and Euro-commercial Paper Programme.

Initially, where did Temasek get its funds to buy its assets?

Temasek took over assets and investments held by the Singapore Government.

Temasek was incorporated in 1974 (under the Singapore Companies Act).

It was incorporated to own and commercially manage investments and assets previously held by the Singapore Government.

What was Temasek’s initial portfolio?

It comprised shares in companies, start-ups and joint ventures previously held by the Singapore Government. They included a bird park, a hotel, a shoe maker, a detergent producer, naval yards converted into a ship repair business, a start-up airline, and an iron and steel mill.

As an exempt private company, Temasek is not required to disclose financial information.

However, since 2004, Temasek has published its annual Temasek Review, which is available for the public to read.

Temasek’s annual report exceeds the standards of disclosure under the Santiago Principles, a set of best practices adopted by sovereign investors in collaboration with the IMF and various governments, including Australia, Canada, Norway and the USA.

Temasek scores 10 out of 10 for transparency on the Linaburg-Maduell Transparency Index for sovereign wealth funds.

The Linaburg-Maduell Transparency Index was developed at the Sovereign Wealth Fund Institute by Carl Linaburg and Michael Maduell.

The rating was developed in 2008 and has since been used worldwide, by sovereign wealth funds in their official annual reports and statements, as the global standard benchmark.

May 13, 2022
PrevPreviousTikTok owner ByteDance to invest billions in Singapore
NextSingapore must remain open, but not blindly open, says Tharman at Singapore SummitNext
On Key