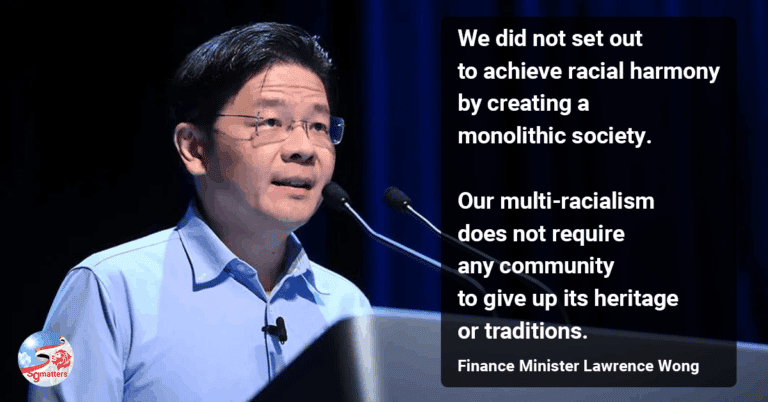 Race is a highly emotive topic because the question of race is wrapped up with our identities, our cultures, our ways of life, Finance Minister Lawrence Wong said.

“The natural instinct of humans is to look out for people who are most like us, and to view others with suspicion,” Mr Wong said in his speech at the IPS-RSIS forum on race and racism in Singapore.

“It is not impossible to overcome such suspicions, as we and other multi-racial societies have shown. But we would be fooling ourselves if we believed that racial and religious harmony were the natural order of things,” Mr Wong added.

“There is nothing pre-ordained about a multi-racial society,” he said.

“We did not set out to achieve racial harmony by creating a monolithic society. Our multi-racialism does not require any community to give up its heritage or traditions.

Instead we decided to preserve, protect and celebrate our diversity.

Hence we encourage each community to take pride in its own culture and tradition.

At the same time, we seek common ground among our communities, expand our common space and strengthen our shared sense of belonging and identity.

Some have criticised policies that preserve and develop component cultures, Mr Wong said. They feel that such policies make Singaporeans more race-conscious and detract from multi-racialism. Special Assistance Plan or SAP schools are sometimes cited to make this point.

“But I will ask those who criticise SAP schools to consider: will our society be better off if standards of our spoken and written vernacular languages were to fall and Singaporean Chinese, Malay and Indian cultures were to wither and dissipate?

For that is the primary reason for SAP schools. They were pure Chinese-medium schools before. We retained some of them in this new form so we can still have a sufficient number of bilingual and bicultural students, equally strong in English as well as Chinese.

Similarly, we have programs to nurture Malay and Tamil in our schools.

We also have Madrasahs, strong vernacular media, and a huge variety of Chinese, Malay and Indian cultural organisations – from the Chinese Orchestra to the Malay Heritage Centre to the Indian Fine Arts Society.

Should all this be done away with on the grounds they are not inclusive of other races, other languages, other cultures, other traditions?

Obviously not, for that is not what our commitment to “one people, regardless of race, language or religion” entails.

Our distinctive philosophy of multi-racialism

“Being Singaporean has never been a matter of subtraction, but of addition; not of becoming less, but more; not of limitation and contraction, but of openness and expansion.

This is our distinctive philosophy of multiracialism.

We have never devalued diversity, but accepted and celebrated it.

It doesn’t require us to erase our rich inheritances in favour of a bland and homogenised broth.

Instead, it has enjoined us to embrace our inheritances, respect those of others, and go beyond them to encompass a national identity and shared purpose.

Read also  My National Day as a Singaporean Malay