DPM Heng Swee Keat was happy to hear that WP Jamus Lim was ‘happy as a clam when he when he heard that our fiscal strategy reflected a number of elements that he had previously outlined.’

I was happy to hear that Associate Professor Jamus Lim was “happy as a clam” when he heard that our fiscal strategy reflected a number of elements that he had previously outlined. But I announced that we were studying borrowing in 2019, even before he entered Parliament. But I am glad he shares our views. So perhaps if he reads more of our past Budget statements, he would be even happier.

Nevertheless, I must caution against the additional modifications that he has suggested to what is essentially a prudent and restrained use of borrowing.

The Government’s approach to borrowing is a carefully calibrated one.

While we do borrow, the key difference is what we do with the debt proceeds.

The Government is currently already borrowing, under the Government Securities Act and the Local Treasury Bills Act. But instead of spending the proceeds, we invest them for long-term returns, which is used to repay our debt. The rest go back into the reserves.

Government is going to borrow for major, long-term infrastructure. These investments will benefit and generate value over generations, but the upfront costs are hefty.

Borrowing is a fair and efficient approach to spread out the lumpy costs, to ensure that we better match the timing of the benefits with the timing of spending. If we do not, I will have to raise taxes significantly to fund these major expenditures.

Associate Professor Jamus Lim has asked if we can borrow more to fund “soft capital” like education.

Let me sound a word of caution. We have to refrain from the temptation to borrow for what are essentially recurrent expenditures.

In many countries, there is a tendency to expand the scope of what constitutes “soft capital” beyond the original intentions. So the original intentions were good, but it creeps. When used to fund increases to Government subsidies or social transfers, it is really more recurrent spending. Borrowing continuously for them will just lead to ever higher debts, which has to be repaid by future generations.

When borrowing is not used productively, the result has often been high debt – low growth, rather than high growth – low debt. As debt level grows, interest payments can also increase, as Associate Professor Jamus Lim himself pointed out.

This can lead to an unsustainable fiscal position and spiralling debt, affecting investor confidence, raising the cost of funding for businesses and ultimately our long-term growth.

In addition, interest rates are low for now, but this may change quickly. When it changes, existing debts would have to be refinanced, and a higher rate could spiral the fiscal situation downward quickly. This usually happens in a crisis, when we can least afford it. 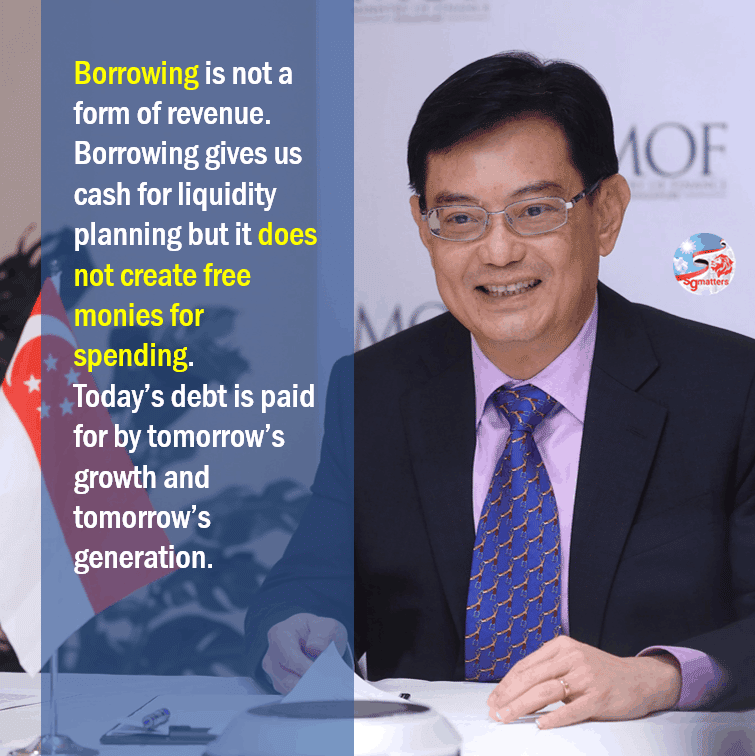 Borrowing is not a form of revenue. Borrowing gives us cash for liquidity planning but it does not create free monies for spending. Today’s debt is paid for by tomorrow’s growth and tomorrow’s generation.

As I have explained earlier, our fiscal principle is that every Government must spend within its means and raise the revenue required to fund its initiatives.