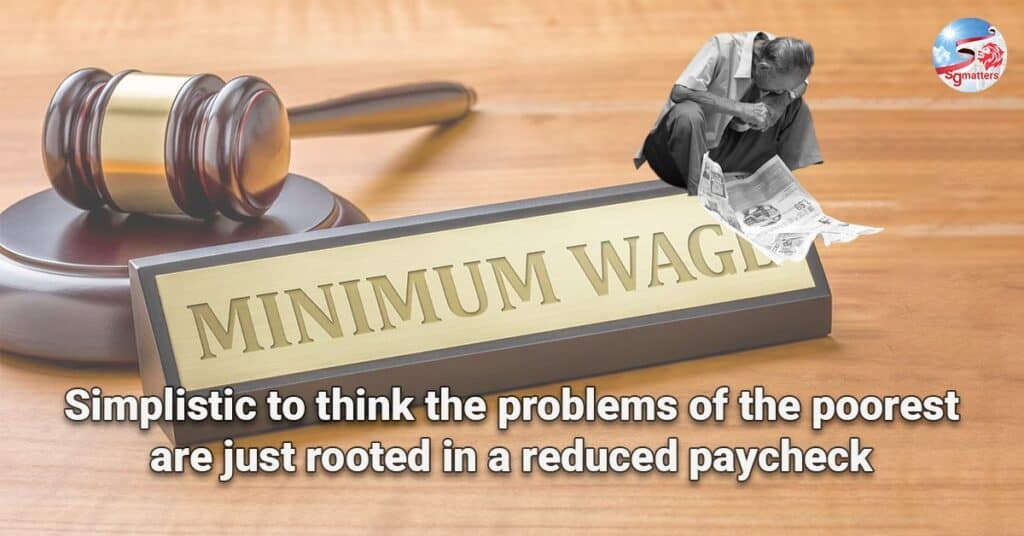 There is often a background of mental health, medical conditions or other disability that make them unable to produce work to justify such a wage, Yishen said.

Much has been said about introducing the Minimum Wage of $1300 in Singapore.

Minimum wage and poverty: the examples of US and Australia

Australia has the highest minimum wage in the world. Poverty in Australia 2020, published by Analysis and Policy Observatory reported that the poverty rate in Australia is worse than in most other wealthy countries.

Elsewhere in countries that have the minimum wage, the situation is pretty much the same.

During the debate on the minimum wage in Parliament, Dr Koh Poh Koon said that 32,000 workers earned less than $1300 a month. He also said that this figure included people with disabilities.

What is missing from the discussion on minimum wage was why some workers are earning below $1300, Yishen said. He estimated that 32,000 represents 1.3% of the resident workforce based on a 2.4 million resident workforce.

He gave the example of his uncle who once owned an auto repair shop but now worked for a fast food restaurant as a cleaner after a stroke, a job that he said ‘provided a paycheck and a purpose’.

The work of VWOs and MSF

“Many good Voluntary Welfare Organisations in Singapore under the coordination of the Ministry of Social and Family Development toil silently out of the spotlight to help these individuals with their respective problems to earn a living with dignity – grants for training, exemptions from COE, wage supplements, job placement assistance,” he said.

There is often a background of mental health, medical conditions or other disability that make them unable to produce work to justify such a wage. In the weeds you will find many social workers and civil servants trying to figure out the very messy real world solutions that just go beyond a simple prescription.”

Indeed, it takes much more than wages to help the poorest. This is why MSF has taken a holistic approach to helping people including the homeless.

Last year, in an interview with The Straits Times, then Minister for MSF, Desmond Lee said:
In Singapore, a family with complicated needs typically requires help from different agencies from the public and private sectors, such as MSF, Housing Board, Central Provident Fund Board, Ministry of Education and religious and charity groups.

It takes more than a minimum wage.