Security Officers Exploited? NTUC And Union of Security Employees: Come to us if you have information on illegal practices! A survey of 1,002 officers, conducted last year, found that two in five security officers were exposed to some form of abuse in their course of work. Union of Security Employees (USE) Executive Secretary, Mr Steve Tan said that the officers were most commonly subjected to verbal abuse. He also shared that Covid-19 has increased the tensions at their worksites.

Other than abuse, some common misconceptions that our security officers face is that they don’t provide value-added work, they just sit and “do nothing”. That could not be further from the truth. Our security officers play an important role in ensuring the safety and security of people and the premises where they are deployed! They often take on additional duties and in the past few years, many have upgraded their skillsets with the implementation of the Progressive Wage Model.

There are 265 security agencies who collectively employ about 55,000 security officers in Singapore.

Four security agencies have been charged in court for Employment Act breaches thus far. These companies were found to have deployed security officers for hours beyond what is permissible under the Employment Act. Recently, a security company, Peregrine Security, was fined $34,000. They had made four of its security officers work more than 12 hours a day!  One officer even worked round the clock for nine consecutive days between Oct 18 and Oct 26 last year, entailing to 20-hour workdays with only four hours of break.

The errant company had since pleaded guilty to four amalgamated charges. These involve making the two workers work more than 12 hours each day for 33 days and 44 days.

The shortage of officers has been a persistent problem for the industry. Agencies would go to extreme ends to ensure the committed headcounts are present, even to the extent of getting their officers to work longer than legally permitted.

To address the concerns of the industry, NTUC Singapore and the Union of Security Employees (USE), together with the Security Association of Singapore and Association for Certified Security Agencies have been working with tripartite partners to tackle these issues.

It’s not all NATO (No Action, Talk Only). Security officers, agencies and service buyers have benefitted over the years!

USE has been helping agencies and their buyers pivot to new ways of using integrated man-machine methods. This helps them attain better security outcomes and higher productivity. Through this, the number of officers required would also come down significantly – addressing the manpower shortage issue.

With new guarding approaches, officers will also require new skills. This also means that their wages should rise under the Progressive Wage Model. At the same time, officers also gain more confidence! The hard work continues.

Very soon, there will be key recommendations made to address long-standing issues such as excessive working hours as well as the challenges faced by security officers at the frontline when they are made to deal with incidents and a myriad of issues including abuse.

New offences and tougher penalties for those who harass, assault or hurt officers carrying out their duties

On the welfare front, after a Bill passed in Parliament on 5 October introduced new offences and tougher penalties for those who harass, assault or hurt officers carrying out their duties, security officers are also set to receive more protection. The Labour Movement has lobbied for these changes through industry consultations and through our Labour Members of Parliament. Good work in looking out for the welfare of our security officers!

“NTUC Singapore and the Union of Security Employees (USE), together with the Security Association of Singapore and Association for Certified Security Agencies have championed hard for significant changes to the Progressive Wage Model (PWM) for the security industry, intended as a big push to transform the industry and raise its professionalism.” NTUC Secretary-General, Ng Chee Meng

Some issues are not so easily resolved. Thus, bad practices must be weeded out for the security industry to transform and progress. Perhaps many don’t know this – the USE runs a mediation centre under an MOU with the Tripartite Alliance for Dispute Management. This centre also acts as a centre for whistle-blowers who have information about illegal deployments to report them anonymously.

USE also runs fortnightly advertisements in The Straits Times Classifieds to encourage whistle-blowers to step forward with information. This information is then shared with MOM for enforcement actions to be taken!

To make things even better, Nominated MP Abdul Samad, who is also NTUC’s vice-president, shared that the USE will be launching an application in the fourth quarter of this year to allow security officers and agencies to report any harassment or work-related grievances to the union.

The work continues because our security officers deserve better!

Read also  Amidst the pandemic, our security officers are not forgotten!

May 30, 2022
PrevPreviousMan admits consuming LSD on day he allegedly killed mum and grandma; this is why Singapore is dead serious against drug abuse
NextThe genesis of GIC is part of the larger narrative of how Singapore manages its reserves to benefit SingaporeansNext
On Key 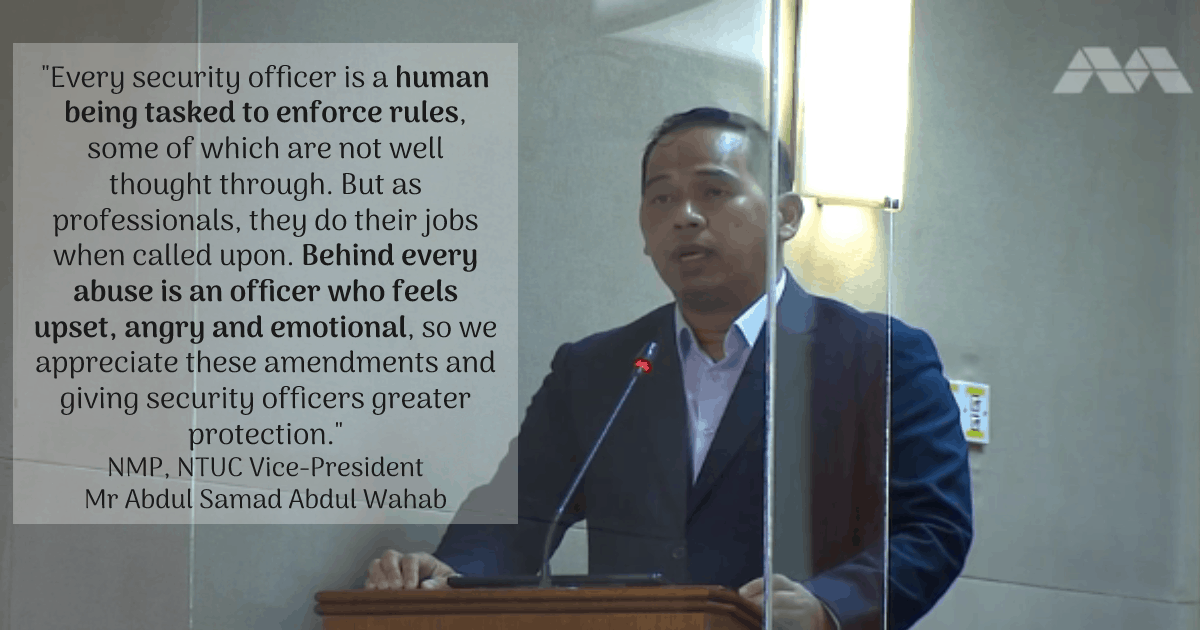 “We survive on willpower, kopi and Redbull.” The work of security officers is tough. Vulgarities, abuse from the public is more common than you think…