Raising the incomes of our less skilled and lower wage workers is a holistic and continuous effort, Dr Koh Poh Koon said in Parliament on 15 October. Significant progress has been made in the last 10 years. The wages of workers at the lowest 20th percentile have increased by 24% in real terms in the last five years, and by 39% over the last ten years.

Close to 80,000 cleaners, security guards and landscape workers have their wages lifted without loss of jobs.  Their wages have increased by 30% in recent years. The PWM in these sectors have also helped lift wages in other sectors too.

The PWM also enables them to climb a skills-ladder, improving their future employability and wage progression.

This has been a significant achievement, because the workers in these sectors tend to be older or with limited education, and are at highest risk of dis-employment. Enabling them to climb the skills-ladder required very involved negotiations, and firms had to change many practices.

Low wage workers also get an uplift in incomes through WIS funded by taxes. The Government tops up the income of workers earning less than $2300 per month.

“Our low wage workers get an uplift in income through WIS, through the PWM and through productivity improvements. The upshot is that we achieve higher incomes for low wage workers without putting their employment at risk, and minimising cost increases for consumers.” 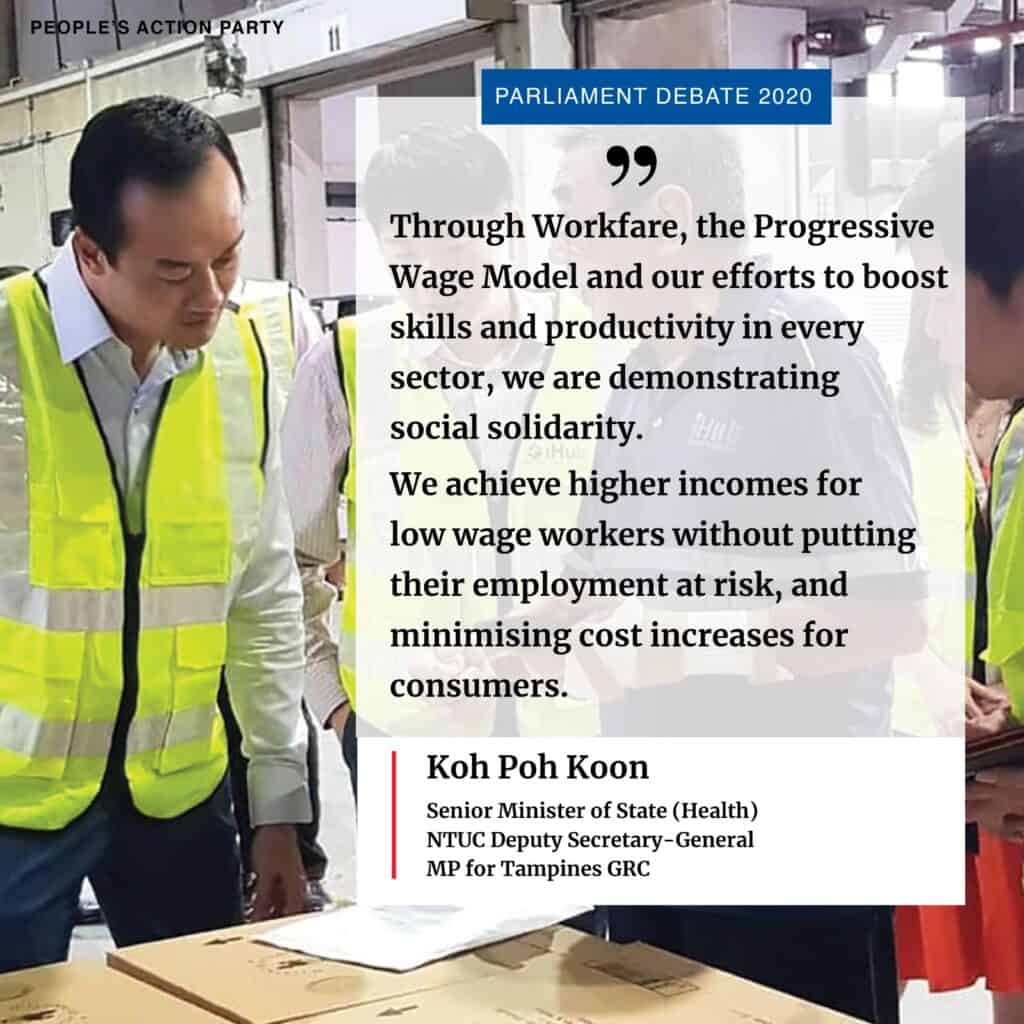 With plans to extend the PWM to all sectors, this number will be further reduced.

The PWM for the Lift and Escalator Sector has already been concluded and becomes mandatory in 2022. It has an entry wage of $1850. NTUC had already submitted a proposal to the Government to form a Tripartite Cluster for the Waste Management Industry to introduce a PWM focusing on the waste collection sub-sectors.

To complement the efforts of the PWMs, NTUC is studying the introduction of sectoral benchmarks for sectors currently without a PWM. A sectoral benchmark is obviously better than the blunt tool of a blanket minimum wage that applies across all sectors. 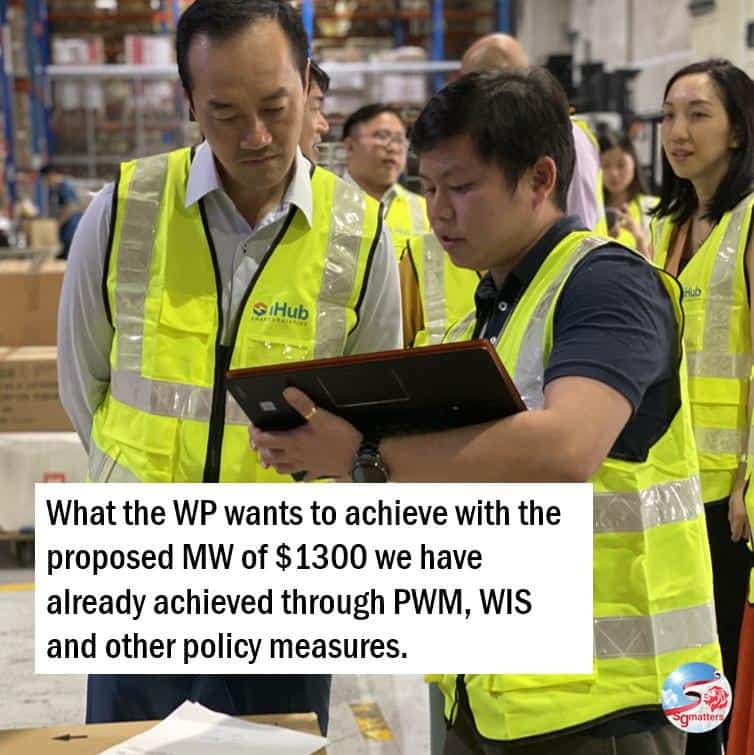 An important point to note is that help for some low wage workers among the 32,000 cannot be dependent on wages alone.

It must be complemented by other measures such as Workfare, social policies such as Silver Support, ComCare, CHAS, Edusave etc so that their daily needs can be adequately met.

“So what the WP wants to achieve with the proposed MW of $1300 we have already achieved through PWM, WIS and other policy measures,” Dr Koh said.

Dr Koh said, “We have in fact made tremendous strides, but it is unfinished business.”

Not ideologically opposed to minimum wage. It’s a different and better approach.

The idea of a minimum wage is not new. In fact the first rung of the Progressive Wage Model is a sectoral minimum wage.

“Let me state that we are not ideologically against a MW. … we share the objective to uplift the incomes of low wage workers. Where we differ is the approach to getting there.

We can and we should do more to help the lowest paid in our society. But we must go about it in a way that ensures the upside while minimising the downsides. The cure should not be worse than the problem it tries to solve.” 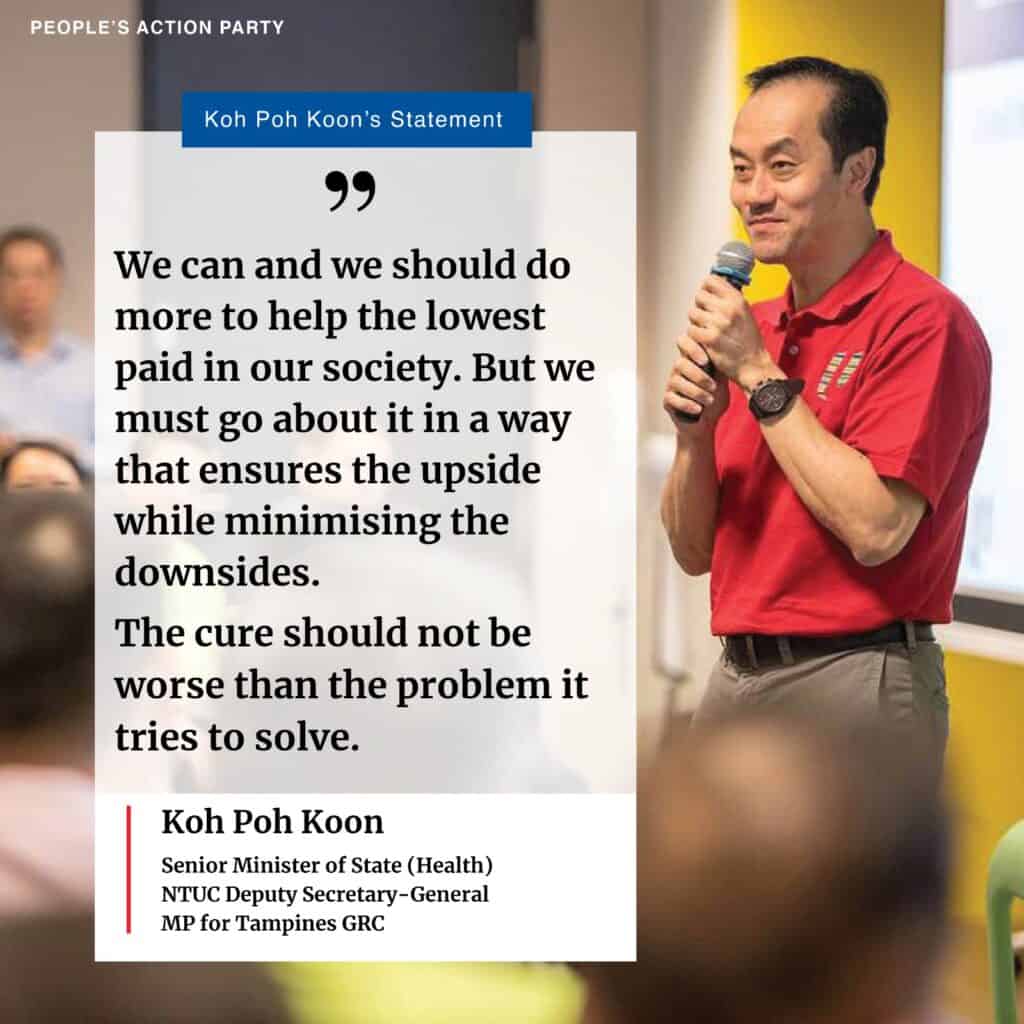