In a glaring display of ignorance, PSP’s Brad Bowyer questioned the need to wear a mask and to maintain safe distancing given that ‘we have virtually NO COVID left in the country‘.

Even a primary school kid will be able to tell by now that ‘zero cases detected’ does not equal to ‘no COVID cases left’. Heard of asymptomatic cases, Brad?

He hasn’t yet grasped that a COVID-19 patient is most infectious 2 days before the onset of symptoms. Or that an infected person can be asymptomatic throughout the entire period and unknowingly infect others. This is why we wear masks so that we keep our saliva and droplets to ourselves lest we unknowing spread the virus to others. Learn that, Brad!

Brad trivialised the use of vaccines and spread misinformation about them

He made up his own ‘facts’ along the way. (See yellow highlight)

He suggested that healthy lifestyles, and activities like exercise in the sun, nutrition will protect us all from COVID-19 and future viruses instead of ‘risky unnatural methods’ like vaccines. Seriously, where did he get his science from?

His post drew a comment from a Barry Smyth who expressed shock at Brad’s post. He chided Brad for a ‘stupid’ and ‘dangerous’ post and for making statements with zero scientific and medical evidence to support them. 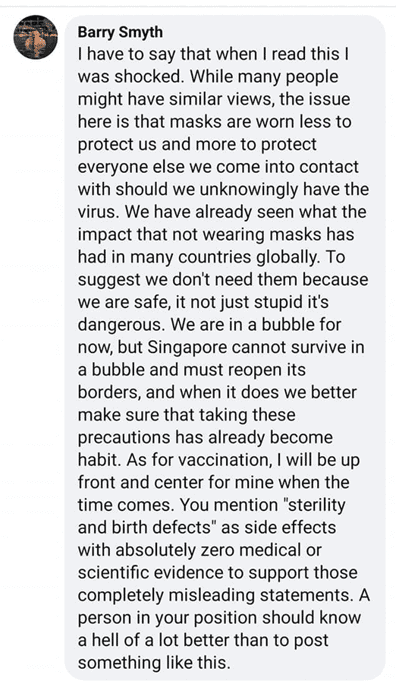 Ms Manickam expressed disappointment in how he trivialised the Covid-19 crisis.

“As a Covid-19 survivor, I am extremely disturbed by the misinformation and fear you are spreading.”

Ms Manickam also expressed great alarm at his recent posts on COVID-19 which she described as irresponsible conduct.

“I am not sure if any members of the public has written in to the Progress Singapore Party about your irresponsible conduct on the subject, but I will do so. I believe the Party has to distance itself from your dangerous opinions,” she said.

She said that while there were gaps in communication in the early months of the pandemic which caused anxiety, panic and confusion in the general public, the government has generally done well in the few months since the election.

She told him not to spread conspiracy theories on vaccines in the midst of a public health pandemic. The economy, she told him, cannot be more important than human beings. “Social distancing, masking-up and calibrated opening of the economy are all important measures to safeguard the community,” she said.

“We have to follow the lead of the Government and health professionals to keep our people safe,” she added.

She described a conversation she had with a German friend who shared that thousands in Germany have died from the virus as people protests against mask, social distancing and vaccines. These ‘loud protests’ have put many lives on the line. Germany, which was initially hailed for its good practices is now imposing more stringent restrictions. Instead of withdrawing his dangerous statements, Brad told Ms Kala Manickam to do research before commenting – which earned him a ‘joker’ comment from another commenter. 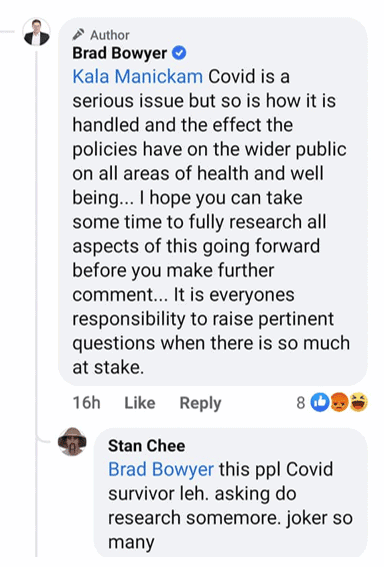 According to the Straits Times, Ms Manickam tested positive for Covid-19 on Aug 27. She was her mother’s approved caregiver during her 14-day quarantine after she returned to Singapore from India on Aug 14. Her mother also tested positive on Aug 26.

The conclusion is out there. Brad’s conduct is irresponsible. He makes misleading statements with zero scientific or medical evidence. As a leader he should know better than to spread fear and misinformation.