Pritam Singh seemed not to understand the meaning of ‘free riders’ 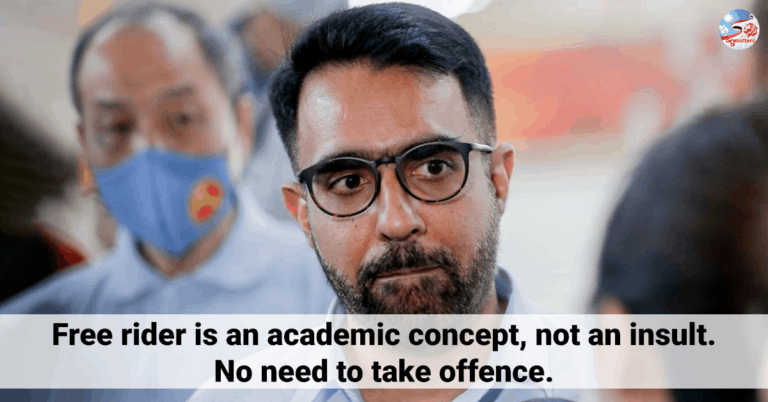 Pritam Singh seemed not to understand the meaning of free-riders and got upset. Free rider is an economic concept. The free rider problem leads to market failure producing the unintended opposite result.

‘Free rider‘ is a concept in economics. It is an example of market failure.

“The concept of free-rider in social sciences (especially economics), is when someone wants a public good or service, but expects others to pay for it. This leads to market failure.”

Examples of the Free Rider Problem leading to market failure

For example, we all want clean streets. But if one of us decides to litter, we think it won’t matter, because everyone else is not littering.

But if everyone thinks like this, then the streets will become dirty.

Similarly with wanting the PAP to govern.

Some voters want the PAP to govern, but vote the opposition because they want some opposition. They expect other people to vote the PAP, so the PAP can remain the Government.

But if everyone thinks like this, then the PAP will fail to become the Government.

This is when free-riding leads to failure – the result opposite to the one intended happens.”

An academic concept. Not an insult. No need to take offence

Mr Pritam Singh did not seem to understand the concept of a free rider and took offence during the exchange with PM Lee. That’s likely because he is a lawyer and not an economist or social scientist.

Sure enough, his supporters pounced on the term ‘free riders’ and mounted an attack on PM Lee and the PAP.

Calvin Cheng thinks PM Lee should not expect many Singaporeans to be able to understand economics.

I do, however, expect Mr Singh to understand some economics, being a Leader of the Opposition.

Calvin writes: “These Singaporeans only understand words literally, and then start attacking him for it.

You won’t get misunderstood then.”