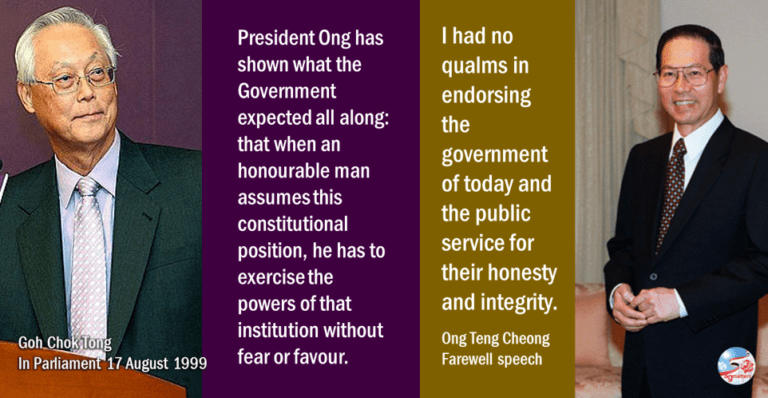 At the farewell reception held in his honour on 30 August 1999, the late President Ong Teng Cheong summed up his working relationship with the government this way:

“My working relationship with the government has been sound. I know how the government machinery ticks, having spent over two decades in government. The Cabinet Ministers had been my colleagues and we understood each other. There was mutual respect, and dealings were always proper and at arm’s length. It speaks well of the integrity of the Cabinet and the government.” 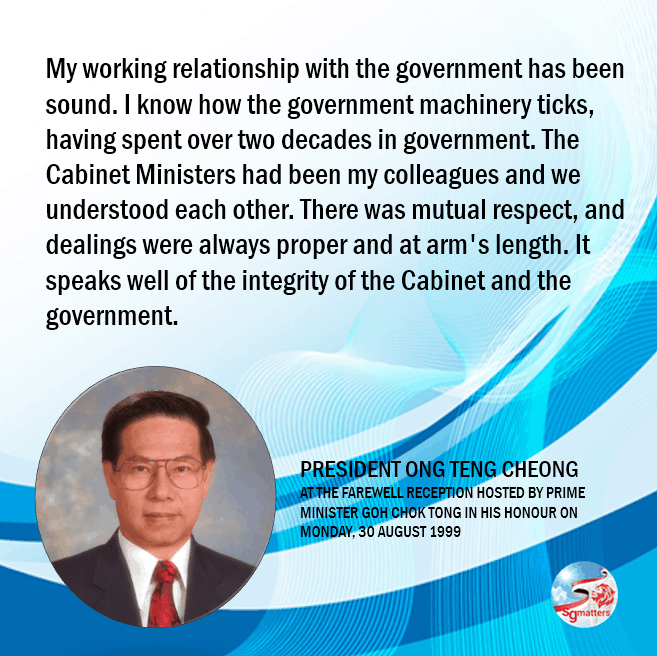 A misperception that crops up from time to time is that the late President Ong Teng Cheong had been denied the information needed for him to perform an effective role in protecting the Past Reserves.

The late President, in fact, was given all the information required to protect past reserves. This information included the value of all the Government’s financial assets, as well as a listing of physical assets, such as buildings and land.

At his 16 July 1999 press conference, then-President Ong Teng Cheong spoke of how it had taken the Accountant-General “more than two, three years” to inform him what the Government’s reserves consisted of. He said that when he asked for an inventory of the physical assets, the Accountant-General had responded that it would take “52 man-years” to produce.

What actually happened according to minutes recorded

President Ong was mistaken in his recollection. The listing he requested was given to him less than two months after his request, and not after two or three years or only after he had insisted upon it.

What actually happened was that on 18th June 1996, the President’s office requested a listing of physical assets from the Accountant-General, Mr Goh Khee Kuan.

It was at this meeting that Mr Ong remarked that to protect past reserves, the physical assets should ideally be denominated in dollar value.

In response, the Accountant-General said that it would take 56 man-years (not 52) just to value the existing properties even though he had already produced the listing (without valuation figures).

“56 man-years” does not mean it takes 56 years to complete the task.

A man-year is a measure of the amount of work to be done,

and not of the time it will take to do it.

Is it unreasonable for 56 men to take one year to complete the valuation?

The land was in some 50,000 parcels, including miscellaneous parcels like roads, drains and even some reservoirs. Such land parcels had to be verified through actual surveys.

Thus it is not unreasonable for a team of 56 men to take one year to value the entire stock of land and buildings owned by the Government.

Valuation of land and protecting Past Reserves

State land forms part of Singapore’s Past Reserves. Where state land is concerned, the question of protecting Past Reserves (whether Past Reserves are being drawn down) does not arise unless a piece of land is about to be sold off or alienated.  At the point of sale, the land is valued. The Reserves protection framework requires only that the land be sold at fair market value.

The proposed revaluation of all state land would be a waste of resources. This is because much of State land would remain as State land, i.e. unsold. Furthermore, the value of each piece of land depended on planning and zoning restrictions, which the Government could change.

A new institution put to the test

The late President was not stonewalled. He was given all the information he needed to protect Past Reserves.

Then-Prime Minister Goh Chok Tong described it as ‘a learning exercise’ for both the President and the Government. “From time to time, as we worked the new provisions of the Constitution, difficulties and differences of views have arisen. This was to be expected,” he said.

To this, President Ong responded with:

“Indeed, as you have said, Prime Minister, it was an educational experience for all of us. I want to add that what is tested by fire, usually comes out purer and stronger.” A critical layer of checks the government imposed on itself

In remarks made at the farewell reception, President Ong said, “The government’s selection system of appointing men of integrity to key posts is probably the most rigorous anywhere. Most of these key appointments have to be approved by the President at his discretion, and on no occasion had I found a reason to disapprove any of these appointments. It is a critical layer of checks that the government has imposed on itself. I had no qualms in endorsing the government of today and the public service for their honesty and integrity.”

A valuable piece of advice from President Ong Teng Cheong 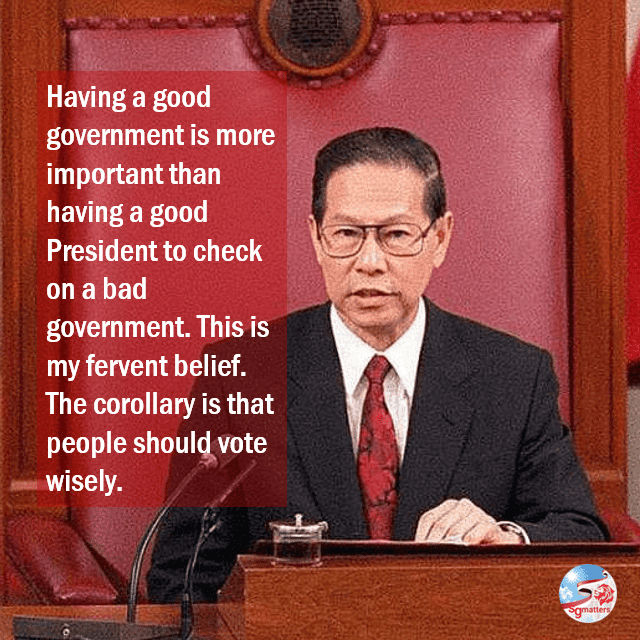 In Parliament on 17 August 1999, then Prime Minister Goh Chok Tong placed on record in the House the significant contributions of President Ong.

“He took his job seriously. He has helped us to test the powers and workings of the new institution, and iron out ambiguities in the powers of the President vis-a-vis the Government. … Most important of all, he has demonstrated that the two-key system to safeguard Singapore’s reserves and key public sector appointments can be made to work.” 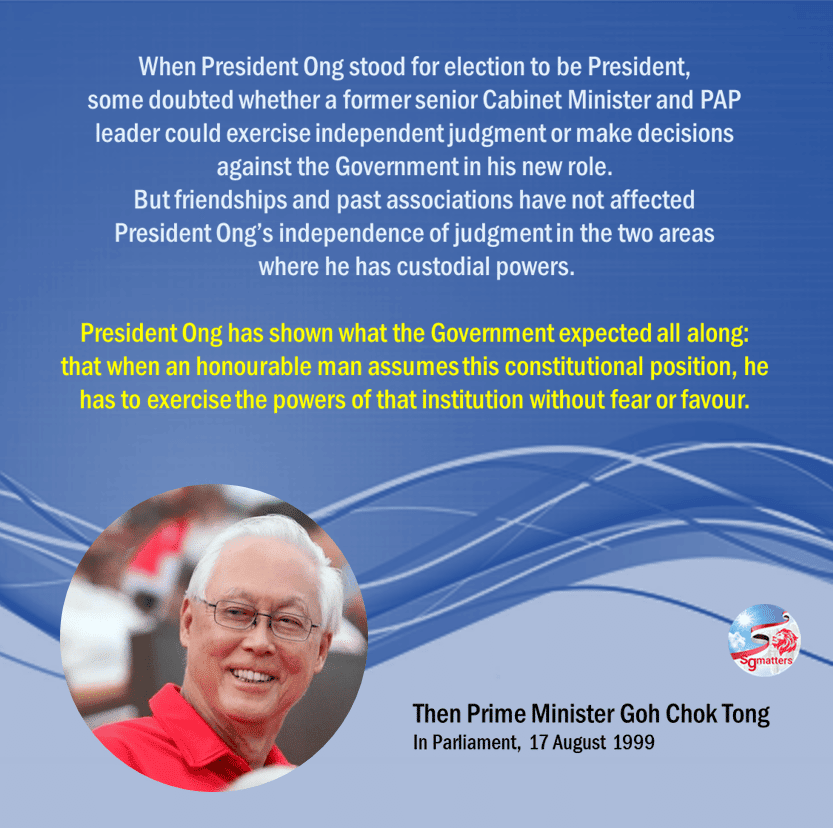 “When President Ong stood for election to be President, some doubted whether a former senior Cabinet Minister and PAP leader could exercise independent judgment or make decisions against the Government in his new role. But friendships and past associations have not affected President Ong’s independence of judgment in the two areas where he has custodial powers.

President Ong has shown what the Government expected all along: that when an honourable man assumes this constitutional position, he has to exercise the powers of that institution without fear or favour.

Together with the Council of Presidential Advisers, President Ong has established an effective institution for those powers vested in the Presidency. That is a major contribution to Singapore,” Mr Goh said in Parliament on 17 August 1999.

Read also  Why is there such a close link between NTUC and PAP?

May 13, 2022
PrevPreviousWhy is there such a close link between NTUC and PAP?
NextWho is Yeo Wan Ling? The new MP from Pasir Ris-Punggol GRC wants you to reach for the starsNext
On Key