PM Lee: Our network of FTAs has benefited us enormously. 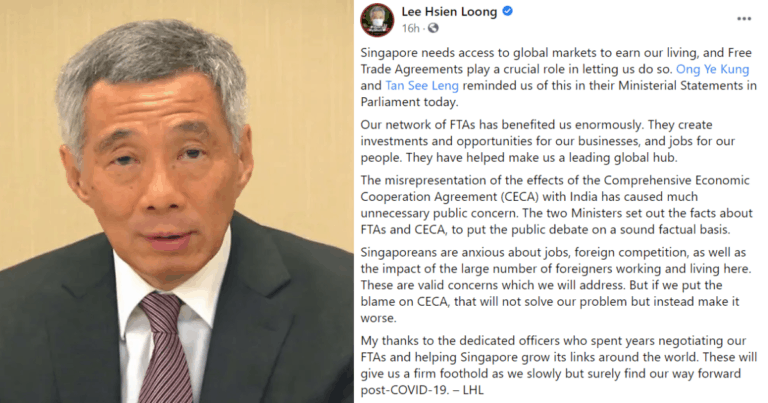 In a social media post yesterday, PM Lee reiterated the importance of our network of FTAs in creating investments and opportunities for our businesses, and jobs for our people. He also thanked the dedicated officers who spent years negotiating our FTAs and helping Singapore grow its links around the world.

In his post, PM Lee shared that the misrepresentation of the effects of the Comprehensive Economic Cooperation Agreement (CECA) with India has caused much unnecessary public concern. 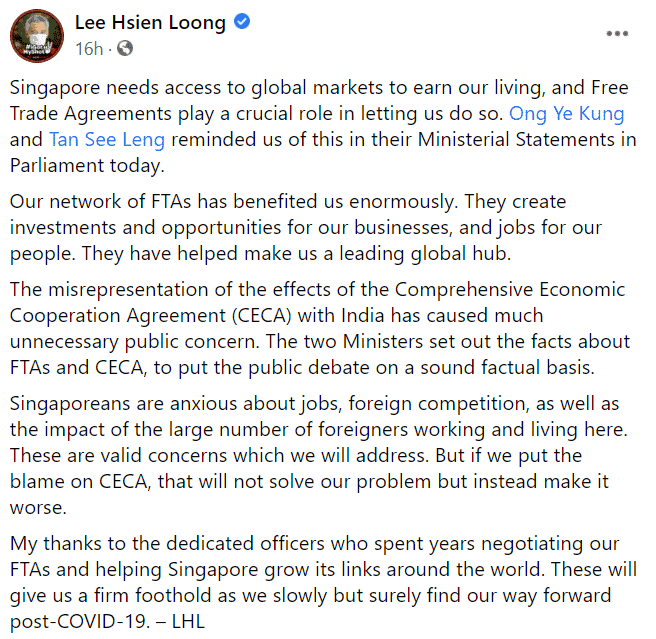 PM Lee also acknowledged the fact that Singaporeans are anxious about jobs, foreign competition, as well as the impact of the large number of foreigners working and living here. He recognised that these are valid concerns which the Government will address. “But if we put the blame on CECA, that will not solve our problem but instead make it worse,” he cautioned.

FTAs, CECA and Making Globalisation Work for our People

In Parliament on 6 July, Minister Ong Ye Kung noted that the PSP has claimed for months that FTAs and CECA have led to the unfettered inflow of Indian professionals, which then displaces Singaporeans from their jobs and brings about all kinds of social ills. In his speech, he set out why FTAs advance Singapore’s interest, and addressed the concerns of Singaporeans on increased competition for jobs.

Minister Ong acknowledged that the concentration of certain nationalities in Singapore has indeed resulted in anxieties amongst some Singaporeans. There is a need to monitor and manage the situation but he also emphasised that Singapore needs to ensure that we have the right talent to keep our economy growing. Fact: The significant increase in bilateral trade and investment figures between India and Singapore since CECA was signed has created numerous good jobs for Singaporeans. It has greatly boosted our efforts to export, attract investments, venture overseas, and benefitted Singaporeans.

Despite all the attacks on CECA, this FTA with India has benefitted Singaporeans. 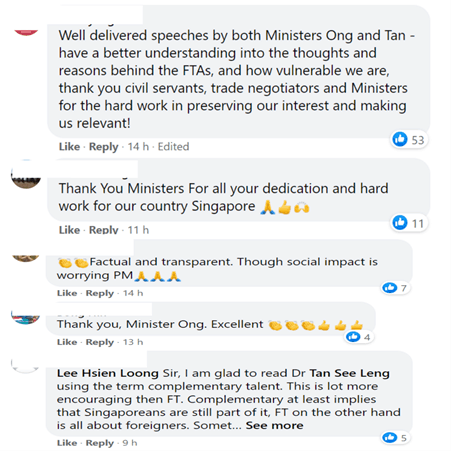 We need foreign investments. Many jobs with some competition is better than no job. 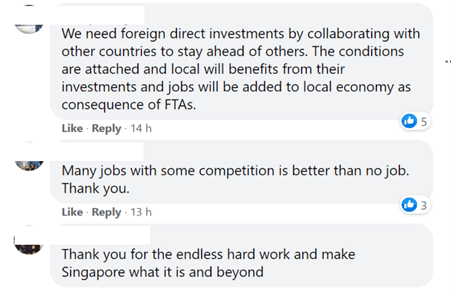 Despite all the controversies surrounding CECA, Singaporeans recognise that FTAs benefit us, but undeniably, there are challenges – and the Government is looking into ways to address them.

Unfettered movement of people across borders would create social unrest and disgruntlement  – this happens everywhere in the world. Minister Ong shared how Governments must retain the ability to impose immigration and border controls, and FTAs cannot undermine that.

“Mr Speaker Sir, I emphasise and underline and highlight and bold, bigger fonts, colour red that nothing in this agreement implies Singapore must unconditionally let in PMEs from India. Contrary to PSP’s claim, our ability to impose requirements for immigration and work pass has never been in question in CECA or any other FTAs that we have signed.”

Minister Ong also acknowledged that PMEs in Singapore do face more competition from foreign PMEs but he highlighted that reducing the number of foreign PMEs does not automatically mean more jobs for locals.  By combining and complementing local and foreign expertise, we can attract more investments and create many more good job and career choices for Singaporeans.

“We need to find the right balance where there are more jobs, some competition.”

While globalisation presents opportunities, it also brings about greater competition, the displacement of industries and jobs, and inflow of immigrants. But moving forward, let’s trust that the PAP Government will always fight for the welfare of Singaporeans, as they have done for the past decades.

May 13, 2022
PrevPreviousWhy is our schools not producing the required number of talents: Leong Mun Wai
NextVital for Singaporean Youths to Embrace GlobalisationNext
On Key