Skip to content
Home » Parti Liyani: the facts of the case as revealed in Parliament
Current Affairs

Parti Liyani: the facts of the case as revealed in Parliament

In March 2019, Ms Parti Liyani was convicted in the State Courts of 4 theft-related charges. She was sentenced to 26 months’ jail. Following an appeal to the High Court against her conviction, she was acquitted of all charges.

Her acquittal raised a number of questions including how AGC and Police handle the case and why AGC decided to charge her. Law Minister Shanmugam’s Ministerial Statement reveals in Parliament the facts of the case which we previously did not know.

Ms Liyani is an Indonesian working in Singapore as a domestic worker since 1997. According to her, Liew Mun Leong (LML) was her third employer. However, MOM’s records show that Liew was in fact her 7th employer.

It was said in Court that over the years,  family’s possessions went missing. LML gave examples such as a bag he bought from Tokyo, his jogging shoes, and “a number of” Longchamp bags. He suspected Ms Liyani of stealing but did not take action as he could not be sure.

In late 2015, the Liews were looking to replace Ms Liyani because they thought she was stealing things. But no firm decision was taken.

A specially designed power bank from France, that was gifted to LML “disappeared” a few days after he received it. Subsequent investigations show that this may have happened in May 2016.

By then, the only occupants in the house were LML, his wife Ng Lai Peng (“NLP”), and Ms Liyani.  Some others may have had access to the house. LML then decided to terminate Ms Liyani’s employment. That was September 2016.

They told the maid agency. Once a replacement helper was available, they decided to let Ms Liyani go. LML was travelling at that time. So he told his wife to arrange for people to be around and serve the notice of termination.

On 28 October 2016 Karl Liew, LML’s son, went to LML’s residence with employment agents. This was at LML’s request. Karl told Ms Liyani they were sending her back. No reasons were initially given. Ms Liyani asked for reasons. Karl told her that “there are missing items in the house. And the only people staying in the house were my father, my mother, and you”.

She was asked to pack her belongings. In addition to that month’s salary, she was given two months’ salary as compensation.

Ms Liyani asked for boxes to pack her things, and these were provided to her. She packed them with some assistance from the Liews’ other employees. She sealed one box with tape and wrote her address on it. The other two boxes were sealed by two other employees of LML.

Karl agreed to pay for the boxes to be sent back to Indonesia. Ms Liyani left the house with the employment agent and returned to Indonesia that night.

When he got home, Karl told his wife Heather Lim what had happened. Heather told him that the boxes should not be sent back without knowing what was inside them.

On 29 October 2016 in the afternoon, NLP, Karl and Heather opened the boxes.

According to them, they found items which belonged to them which they had not seen for years. They spent about two hours going through the items. They also took a 21-second video.

LML returned to Singapore sometime on 29 October 2016. He spent a short time going through the contents of the boxes. LML lodged a Police report at Tanglin Police Station on 30 October 2016.

A Police Gazette was issued on 4 November 2016.

Ms Parti Liyani returned to Singapore on 2 December 2016. She was arrested at the airport based on the Police Gazette. In her statement to the Police, Ms Liyani said that she came back to visit a friend and go sight-seeing.  Thereafter, she planned to return to Indonesia before going to Hong Kong to work. However, later in Court, she said that she in fact returned to Singapore to look for her agent and seek employment.

When she was arrested, some items were found on her. 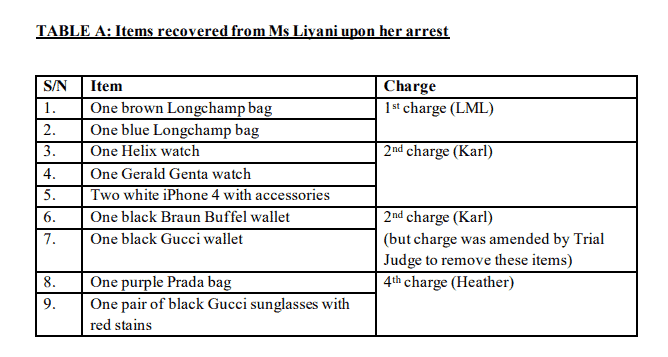 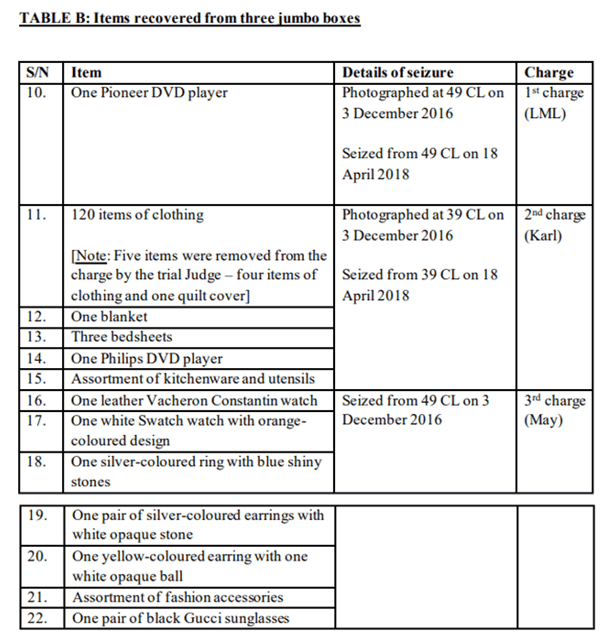