Our police officers are not out to brutally injure anyone; they are here to protect life and property 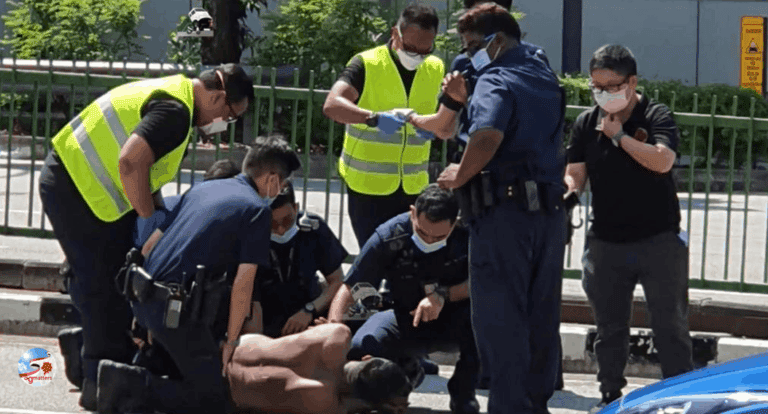 Are our police officers weak? Why did it take so many to arrest one person? Is the amount of force used appropriately? Was it necessary to use the taser?

“Public Servants, like the Police Officers, are bound by their duty to still ensure subjects are placed under arrest within the Force Doctrine,” he wrote.

In fact, all officers are required to go through unarmed drills for situations such as the one in the video. What was seen on the video was ‘part of the force doctrine that the officers had already executed’ in unarmed drills.

For example, if the subject is compliant, a verbal command would have sufficed.

If the subject is of visible threat, then the use of baton together with verbal command would be necessary.

So when is the use of a taser justified?

When the subject is deemed to be of ‘an increasing threat to life, unwilling to cooperate and violent’, said Abdillah. In such instances, officers need to ensure they are able to protect themselves first, he said.

In the scenario where the subject is deemed to be of an imminent threat to life, the use of a revolver might even be necessary.

“Regardless how the video turned out, or how the subject was eventually apprehended, the press release by SPF stated that the subject was alleged to have consumed controlled drugs,” Abdillah said.

“This explains why even after being tased, he was still not compliant and remained defiant,” he added.

“For those who have had experience in dealing with individuals who are high on adrenaline, you’ll know that nothing much can stop them. Not the baton, not the taser, you’ll just need to wait for the right time when their adrenaline runs out before you’ll be able to subdue them.”

There will be a process where officers on duty will explain why they used the taser.

“The training division will seek feedback to better enhance training capabilities to prepare our officers on the ground to manage such situations better.”

At the end of the day, we must remember that our police officers are not out to brutally injure anyone. There are here to protect life and property, to defend, and detect crime.

Read also  Foreigners who break our laws should not expect to be treated any differently from Singaporeans
Read also  Lim Tean arrested; Client alleges Lim misappropriated money awarded to him as damages