Workers’ Party MP Dennis Tan said he experienced “petty and bad politics” during the 2020 General Election, which could lead to a divisive political culture, in his maiden speech in Parliament on 31 August.

He cited complaints made against the placement of WP flags during the campaign in Hougang, and how the People’s Action Party planted its flags in front of WP banners, blocking them from view.

His comments led to an exchange with PAP MP Murali Pillai, who asked if Mr Tan felt that the Elections Department had not been even-handed and that the PAP had been using its “power of incumbency” unfairly against opponents.

Mr Tan’s also alleged that his election posters were pulled down from their original height. Such allegation is a serious one, ELD said, adding that it has not received any such report from the WP MP.

“Mr Tan should file a report with ELD so that this can be investigated,” ELD added.

Netizens tell him not to be petty.

Netizens tell him to devote his time to issues of importance. 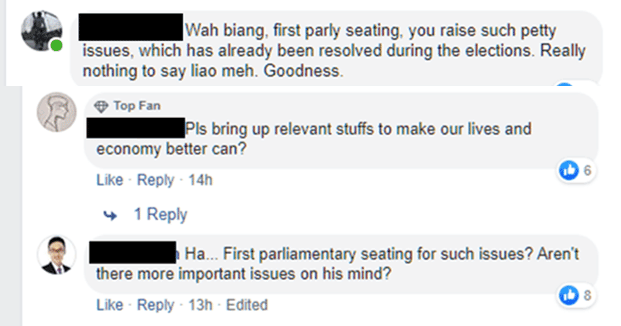 Netizen asks him to raise the issue at the right place.

Netizen advises him to focus on offering alternatives and solutions to build a better Singapore.

Netizen reminds him of petty politics from WP supporters.