Something unfortunate happened in Parliament yesterday. Yes, we’re talking about Raeesah Khan’s admission to lying about the allegations she made against the police on 3 Aug.

In parliament on 3 Aug, Sengkang MP Raeesah Khan shared an anecdote, in which she detailed that -she had accompanied a 25-year-old woman to make a police report three years ago, and that the victim had come out crying because a police officer allegedly made comments about her dressing and the fact that she had been drinking.

In Parliament on 1 Nov, Raeesah Khan admitted that she had said things that were untrue in her previous speech.

She made an apology and said that she had not accompanied the victim to the police station, as she had earlier claimed. Speaker of the House, Ms Indranee Rajah clarified that it was untrue that Raeesah had accompanied the victim to the police station, nor witnessed what she described – which was the victim coming out crying because the police officer had made comments about her dressing and drinking. Raeesah Khan admitted that those statements she made were all untrue.

On 4 Oct, Minister for Home Affairs K. Shanmugam had asked Raeesah to confirm that she had indeed accompanied such a person to the police station. She said “yes” to his question then. However, on 1 Nov, she admitted that the “yes” was similarly untrue.

Raeesah claims she is a survivor herself

Raeesah claimed that she had lied because she did not want to publicly admit that she was part of a sexual assault survivor group. However, Ms Indranee made a good point when she said that it was possible for Raeesah to share the story without having to lie nor reveal the existence of this survivors’ support group. Ms Indranee said that Raeesah could have simply said that she had heard this story from someone instead of adding on untruths to this story. 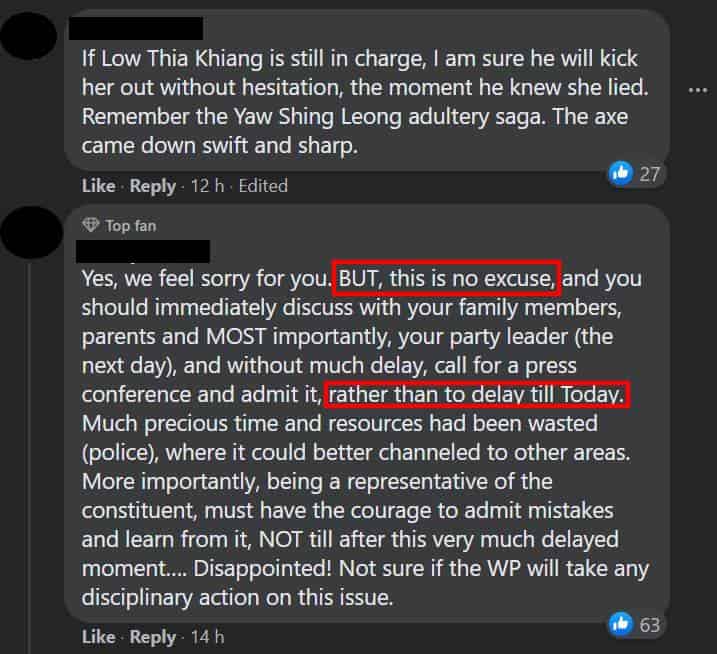 Many netizens were confused that the Workers’ Party had not asked Raeesah Khan to resign. They referenced Low Thia Khiang’s swift decision in the past when a member was found to have committed wrongdoing.

There was empathy towards Raeesah’s admission that she too, is a survivor of sexual assault. Nevertheless, many responded that it is not an excuse for her lies. She could have shared or lobbied for the topic passionately, without having to lie or embellish another survivor’s story.

Netizens also pointed out that she had lied three times, which means that she had a chance to admit that she had lied much earlier. In fact, when Minister Shanmugam had asked for more details last month, she could have come clean that she did not have the details instead of maintaining her position of “wanting details to remain confidential to protect the victim’s identity”. 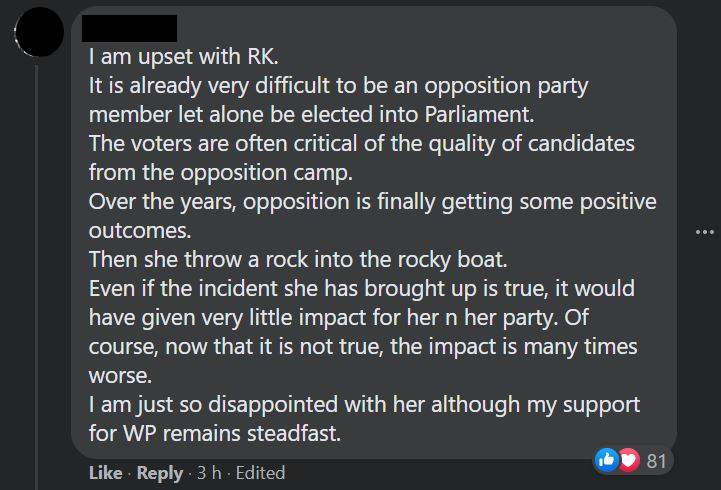 WP supporters also expressed their disappointment and the worry. They are afraid that her act will undo the hard work that WP has put in.

Some also pointed out that she does not seem ready to be an MP. She may fare better being a social rights activist (which she was, prior to joining WP).

Meanwhile, the Workers’ Party announced that they have formed a disciplinary panel to look into this case. The panel comprises secretary-general Pritam Singh, chair Sylvia Lim and vice-chair Faisal Manap. The panel will report its findings and recommendations to the party’s central executive committee after it completes its work.

May 13, 2022
PrevPreviousIt’s so easy to be the Opposition in Singapore and win
NextJamus Lim proposes having a wealth tax in SingaporeNext
On Key