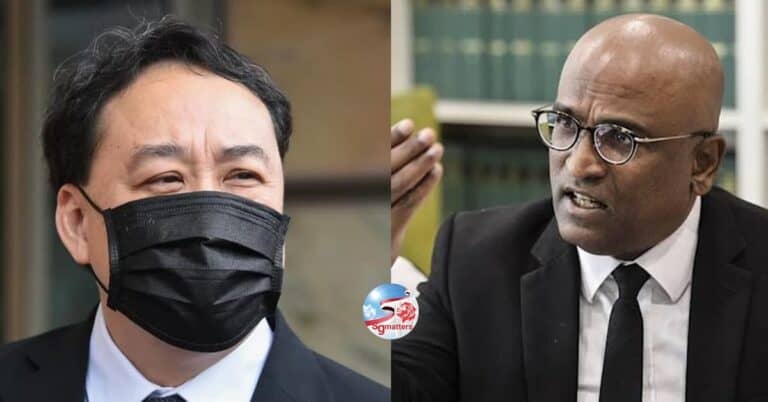 Not too long ago, Opposition politician Lim Tean was the subject of a viral Facebook livestream when five debt collectors showed up at his law firm to demand repayment of an outstanding debt.

The debt collectors were from the Singapore Debt Collection Service (SDCS). They were sent to Lim’s office, Carson Law Chambers, on 21 September to demand a repayment of S$4,950 owed to their client.

Lim Tean attempted to wave them off and refused to make the payment to the debt collectors. $4,950 is not a big sum for a lawyer and one wonders why Lim Tean would need debt collectors to come knocking on his door before he eventually paid this small sum owed to his client.

Back in December 2018, he faced a bankruptcy suit after a Chinese businessman, Huang Min, from Shanghai filed the application to the High Court here. Lim owed Mr Huang US$150,000 that was provided to him as a loan. Mr Huang initiated the bankruptcy proceedings after he failed to get his money back even with an order from the State Court here. The application was withdrawn by Mr Huang after Lim repaid the loan in order not to jeopardise his chances of standing for the 2020 general election.

It’s kind of ironic for someone who had at least 3 bankruptcy claims against him in a short span of time, to talk about holding the government to accountability and transparency.

More recently, lawyer M Ravi had spoken up against Lim Tean, calling him ‘this crook of a century’. He asserted that Lim managed his finances very badly and “steals clients’ monies”. Ravi also accused him of sexually harrassing his paralegal, Sankari. 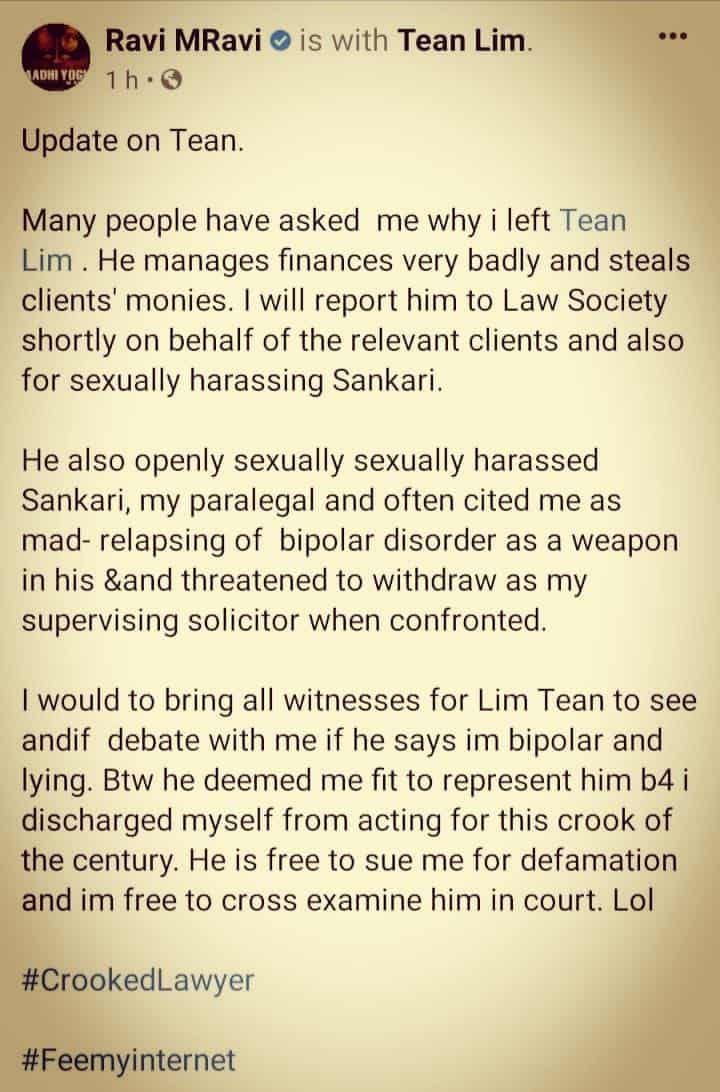 Despite M Ravi being bipolar requiring medication, it has to be noted that the accusation of sexual harassment or ‘stealing clients’ monies’ is not new.

Last October, a former client lodged a police report against Lim accusing him of misappropriating S$30,000 he received from an insurance company on behalf of the client for a motor accident claim. He was subsequently arrested for criminal breach of trust when he told police that he had no intention of complying with a police notice to attend a compulsory interview to assist with investigations into the alleged offence.

Separately, a former employee of Lim had also lodged a police report against him, alleging that she was harassed by him. The complainant alleged that he had invited her for dinner and drinks at his home, and persistently addressed her using inappropriate terms such as “darling” and “baby” even after she told him she felt uncomfortable with it.

Clearly, there can be no smoke without fire. With such a colourful history, it’s amazing that he still garnered 34.6% of the votes in the last election (GE2020). One wonders what goes on in the mind of the voters. Do they know the character they are giving their votes to? Are they happy to have a person of questionable character be their representative in Parliament? Can they trust him with the service and conservancy charges they pay every month? Would they still give him their votes if they know his character?

May 13, 2022
PrevPreviousJamus Lim proposes having a wealth tax in Singapore
NextRaeesah’s lies and the failure of the Leader of the OppositionNext
On Key