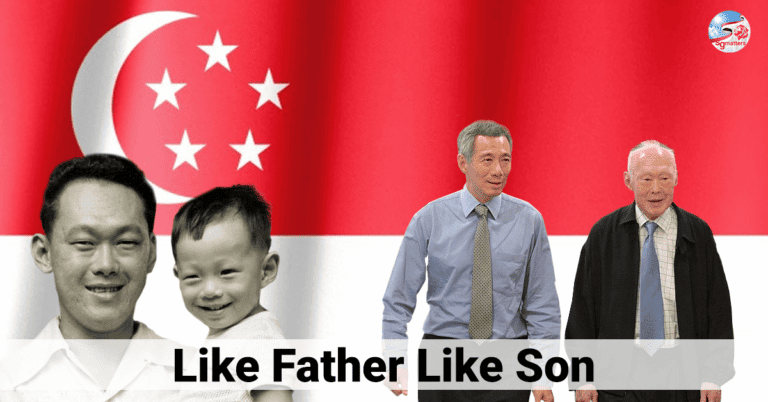 “I used to make sure once a year at least, sometimes twice a year, to take the whole family to Cameron Highlands or Fraser’s Hill for two weeks and play golf. My children would walk around the golf course with my wife and me. We talked to them. Because of my political activities,… I asked, “Do you want to follow me?” My elder son said, “I’ll follow you.“

So when I went out on my ‘fang wen’ (constituency visits) in ’63, he followed me most of the time. He was old enough to remember the July 1964 riots (he would have been 12 years old, and in Catholic High School). I remember a car was sent out to bring him home (because the riots broke out) but couldn’t contact him because it was such a confused and chaotic situation. He walked home alone.” 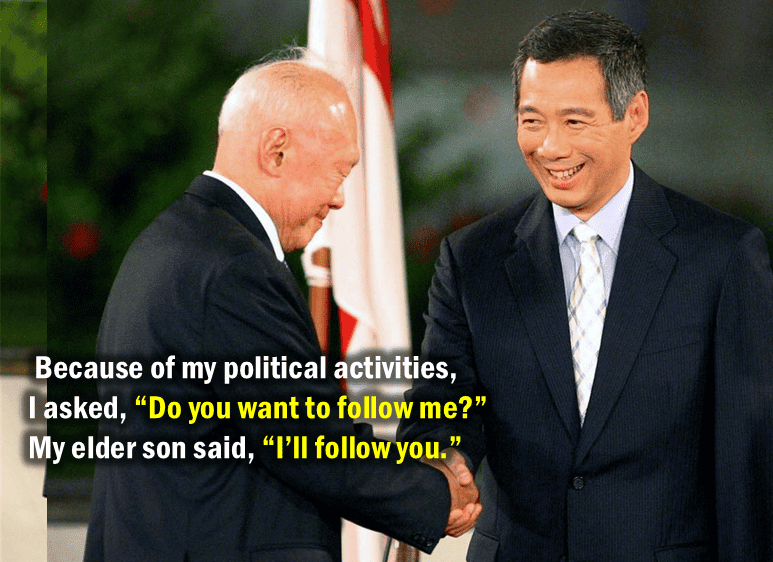 “Of course, growing up as my father’s son could not but mean being exposed to politics very early. I remember as a little boy, I knew his constituency was Tanjong Pagar. I was proud of him becoming legal advisor to so many trade unions, and was excited by the hubbub at Oxley Road whenever elections happened, and our home became the election office.

Growing up with my father, living through those years with him, made me what I am.” 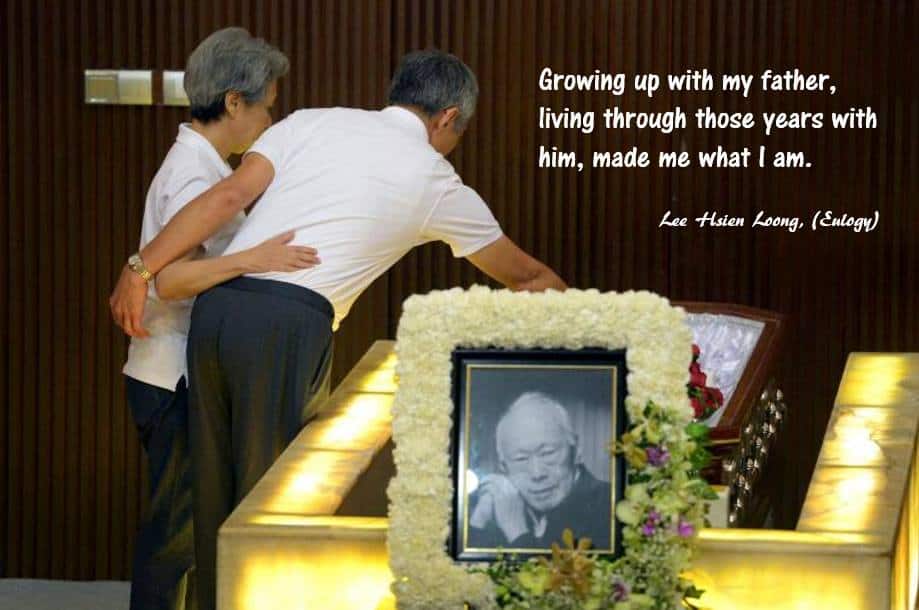 A story is told that when Mr Lee Kuan Yew left Cambridge, his tutor said: “well, Harry, when you get back to Singapore, I hope you’ll keep the flag flying”.

Mr Lee replied: “when I get back, I will make it my duty to get the flag down!”

And he did. He took the Union Jack down and ran up the Singapore flag and kept it flying proudly. 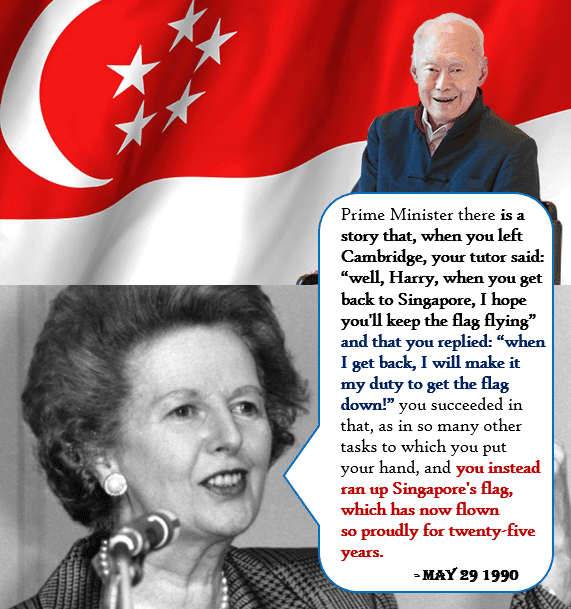 He was the Senior Wrangler (ranked 1st in the Maths Tripos, the famously difficult Cambridge undergraduate Mathematics course) at Cambridge. He finished the Math Tripos in 2 years instead of 3, having been exempted from the first year of the Tripos.

“Loong was not only hardworking, conscientious and professional, but he was also very inventive. All the signs indicated that he would have been a world-class research mathematician. I’m sure his father never realized how exceptional Loong was. He thought Loong was very good. No, Loong was much better than that. When I tried to tell Lee Kuan Yew, ‘Look, your son is phenomenally good: you should encourage him to do mathematics,’ then he implied that that was impossible, since as a top-flight professional mathematician Loong would leave Singapore for Princeton, Harvard or Cambridge, and that would send the wrong signal to the people in Singapore.”
— his Math teacher, Prof. Béla Bollobás, the University of Cambridge in 2007

When Trinity College in Cambridge offered him a fellowship to become a mathematician and teach maths there, he wrote to his tutor and said, “I must go home. I’ve joined the Singapore Armed Forces, my father’s the PM, and for me not to go home and do what I have to do would be bad for the country and bad for me.” Mr Lee Kuan Yew recounted in Hard Truths: “So I knew he was going to come back whatever happens. He was not going to be attracted by the glamour of becoming a great mathematician. He had said he was going to read maths to satisfy himself. He satisfied himself and that was enough, so he was coming back.”

Since he stepped down as Prime Minister in 1990, Mr Lee Kuan Yew had donated all his earnings from his memoirs, speaking engagements and appointments to various advisory boards – without taking any tax deductions – to charity with the bulk to three education endowment funds.  One of these was a $10 million to the Lee Kuan Yew Fund for Bilingualism.

“This is to give you an idea of what my market value is worth,” said Lee Kuan Yew as he handed us some papers. Listed in the printouts were his earnings from his memoirs, speaking engagements and appointments to various advisory boards since stepping down as Prime Minister in November 1990. He has donated all of it – without taking any tax deductions – to charity, with the bulk to three educational endowment funds.

Following the ministerial salary adjustments in 2007, Prime Minister Lee Hsien Loong announced that he would donate all of his salary hike for 5 years (from 2007 to 2012) to charities. This amounted to $3.1 million.

“I want to make clear to Singaporeans that my primary considerations are for the future of this nation, and not for my own salary. Hence I have decided to donate my salary increase for the next 5 years to charity,” he said in Parliament.

This is on top of the salary hike he had donated in the five years since 2007.

He also donated 100% the market value of 38 Oxley Road to charities. The century-old house sitting on an estimated 12,060-square foot plot is estimated to be worth around $25 million by estate agents. 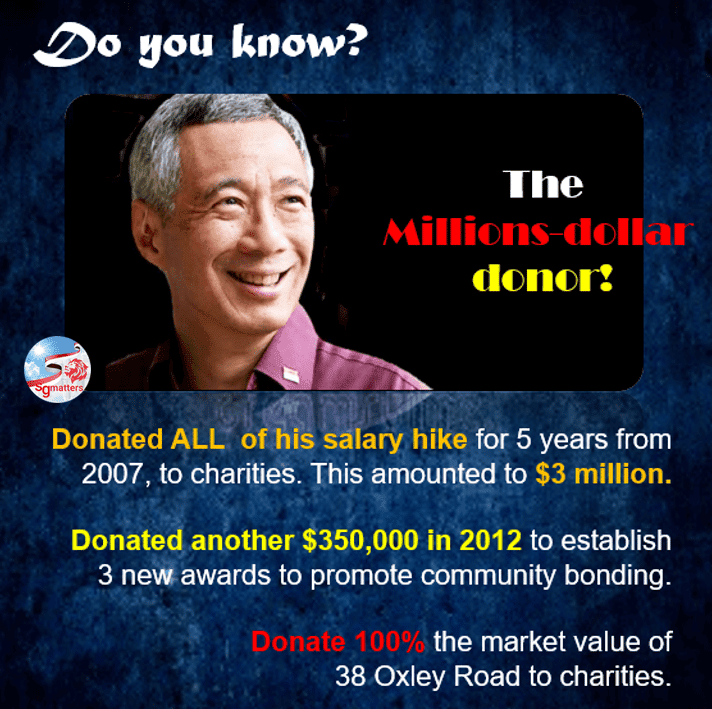 The dispute arising from 38 Oxley Road

38 Oxley Road is the most significant piece of inheritance out of all of the late Mr Lee Kuan Yew’s estate because of its historical significance. Many of Singapore’s early battles were fought there in the basement.

Of his three children, Mr Lee bequeathed the house to his son, Lee Hsien Loong.

The house became the source of dispute between him and his siblings after Lee Hsien Yang and Lee Wei Ling expressed unhappiness that the house was bequeathed to him.

As part of efforts to resolve the family disputes amicably, Lee Hsien Loong offered to transfer 38 Oxley Road to his sister, Lee Wei Ling for a nominal sum of S$1 with a condition attached.

The condition was that should the property be transacted later or acquired by the Government, all proceeds would go to charity.

The deal fell through as Lee Hsien Yang and Dr Lee Wei Ling were unhappy with this position taken by PM Lee.

After the dispute became public, Dr Lee said: “As for the donation to charity, Papa was very clear in his mind, he and Mama had paid for the property at the full financial value when they bought it, there was, therefore, no need to donate to charity any money related to transactions on Oxley.”

Eventually, in efforts to resolve the dispute, PM Lee made his brother a new offer. He would sell the house to his brother at full market value on the condition that each of them donate half the value to charity.

PM Lee said that this was to ‘pre-empt any future controversy overcompensation or redevelopment proceeds’.

“It is not tenable for the family to retain proceeds from any dealing with 38, Oxley Road, as it would look like the family is opposing acquisition and preservation of the house for monetary reasons,” he said.

His siblings remained unhappy over the position he had taken.

Although he did not need to, in addition to the 50% market value that he had donated to charity, PM Lee donated another 50% that value to charity. In other words, he donated 100% of the full market value of 38 Oxley Road to charity.

Read also  What did Mr Lee Kuan Yew say to the legal fraternity?

May 13, 2022
PrevPreviousWhat did Mr Lee Kuan Yew say to the legal fraternity?
NextPritam Singh acknowledges the religious harmony in Aljunied GRCNext
On Key