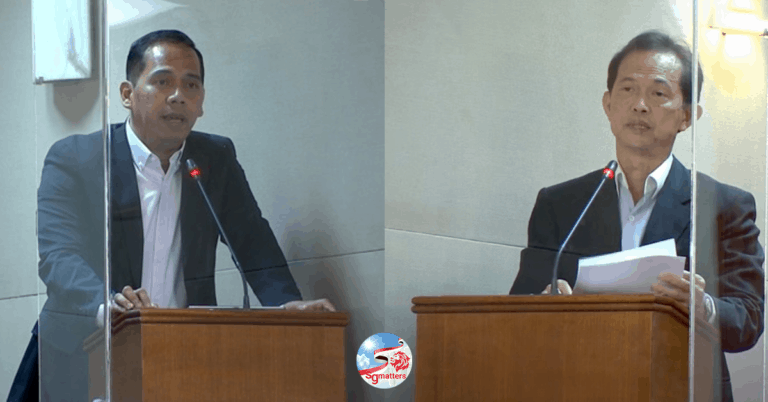 It is no wonder that union leader and NMP Abdul Samad Abdul Wahab, Vice President of NTUC Central Committee, who is also general secretary of the Union of Power and Gas Employees was visibly upset when he rose to speak in response to Leong Mun Wai’s uncalled for attack.

Union leaders work very work for their fellow workers. They are driven by passion and dedication, and a desire to see workers’ improvement in the 3 Ws: workers’ welfare, workers’ wages, and workers’ work prospects.

The Progressive Wage Model is the testimony of the hard work and perseverance of union leaders who negotiate as an equal partner with their tripartite partners. No weaklings at all. The model addresses both wages and career prospects for workers. Wages for cleaners, security officers, landscape workers and those in the lift and escalator sector have risen and will continue to rise in the coming years. These wages have exceeded even the national minimum wage that the opposition WP had been calling for.

Technology is accelerating change in many industries. Jobs become obsolete. Workers are displaced. Displaced workers are not helped by getting rid of foreign workers. Ensuring that the Singapore worker is competitive and employable is a priority with NTUC which has played a pivotal role in spearheading efforts at skill-training and retraining of workers. Such efforts should not be swept aside or disregarded.

Through its Job Security Council (JSC), NTUC has helped to match thousands of workers to their future employers, and thus avoided retrenchment for these workers. The JSC is an ecosystem with a network of receiving and releasing companies that is built on trust.

The NTUC e2i (Employment and Employability Institute) is the ecosystem manager. It gathers information on job vacancies and jobs that are phasing out in advance, and move upstream to provide help to companies and workers.

The JSC provides transition support to at-risk or displaced workers with career coaching, skills evaluation, access to training, job-search assistance and job matching services to improve their employment prospects and match them into new jobs.

What does a Company Training Committee (CTC) do? It identifies the skills and training that employees need to support the company’s strategic vision and direction and to keep up with industry transformation. It coordinates efforts to communicate and implement training plans to build new competencies, close existing skills gaps and enhance productivity through technical, adaptive and technology skills to realise the company’s vision for the future. It implements a workforce upgrading plan to help ready employees for the evolution of jobs, stay relevant with new skills and be resilient to new ways of working, towards better jobs, better pay and better career progression.

NTUC, through its social enterprise FairPrice, helps to mitigate the cost of living by keeping prices stable especially in times of crisis.  Indeed, Mr Leong himself recalled that he collected a packet of rice from NTUC during a crisis when he was a little boy.

Labour MPs like Patrick Tay are always at the forefront speaking up for the Singaporean core in Parliament. Many of the policies on employment and foreign manpower are the results of the lobbying of these labour MPs. The Fair Consideration Framework, the change to the Employment Act to cover all PMEs, the foreign worker hiring ratios are some examples.

The latest development is that the Tripartite Guidelines on Fair Employment Practices will be enshrined into law. This is a significant development and the result of an unrelenting push by labour MPs. Mr Leong has chosen to ignore this and all the good works done by NTUC and their leaders. He has chosen instead of make politics out of employment numbers, all the while ignoring the data provided to him by MOM.

Mr Leong would do better to walk with union leaders, see and understand the work they do every day, be better acquainted with the work done by union leaders and NTUC before he launched his attacks on them in the sacred chamber of Parliament.

An apology from Mr Leong is due

May 13, 2022
PrevPreviousDemystifying Help Schemes for Lower-wage Workers
NextIs it true that before the Fair Consideration Framework was implemented, locals were not a priority?Next
On Key