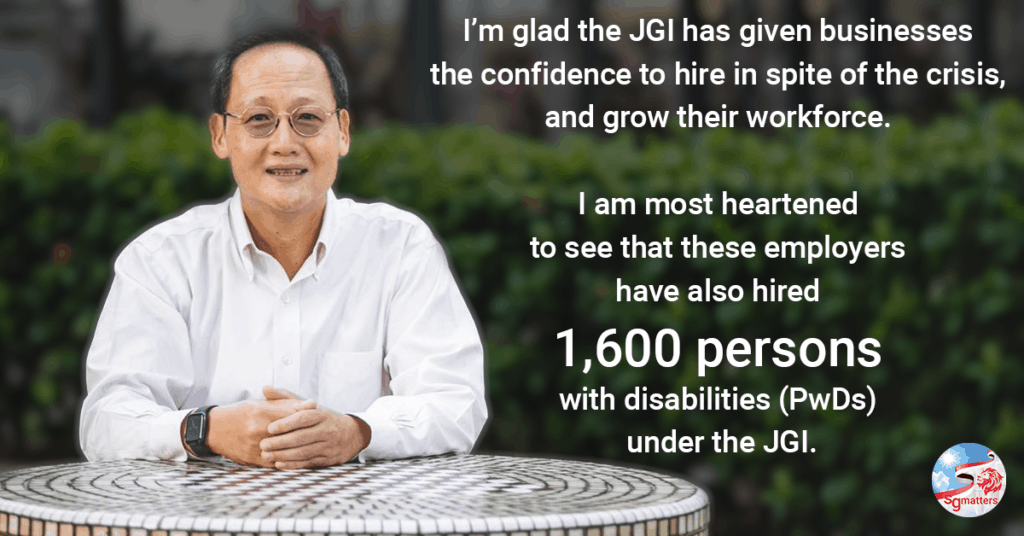 At the start of the pandemic, the Government anticipated that many would lose their jobs. Saving jobs and creating jobs for Singaporeans thus became a central focus of the Singapore Government in this pandemic.  The Jobs Growth Incentive is one such initiative to create good and long-term jobs.

As of February 2021, more than 270,000 locals have been hired by 42,000 businesses to expand their local workforce with support from the Jobs Growth Incentive (JGI). 99% of these businesses were small-medium enterprises (SMEs).

Half of them were not employed at the point of hire. About one-third had been out of work for more than 6 months.

About six in 10 were previously employed in a different sector.

Close to half of JGI-supported hires were mature workers aged 40 and above, and one-third were aged 50 and above.

Six in 10 of the JGI-supported hires earned the same or higher wages compared to their previous jobs.

Manpower Minister Dr Tan See Leng is heartened by the fact that more than 1600 PwD have been hired through this incentive.

During his visit to The Social Kitchen (TSK), he met Jessica, who started working there as a service staff in December last year. “Jessica has Down Syndrome, but this does not change her positive attitude and willingness to learn, which were the key attributes that made The Social Kitchen consider her a suitable candidate for the job'” Dr Tan said. “She currently helps out with packing food products, and she showed me the ropes in packing the burgers nicely. It is reassuring to know that she will receive further training at The Social Kitchen so that she can progress in her career.”

TSK’s success with employing PwDs come from investing in their training, to equip workers with useful skill, and providing a positive and nurturing environment where all workers in the café support one another as a team.

The company works with employees to identify skill sets (e.g. digital skills, customer service) that they require, and puts them through training to pick up these new skills as they progress in their careers.

About the Jobs Growth Incentive (JGI)

Introduced in August 2020, the Jobs Growth Incentive provides salary support to employers to expand local hiring so as to create good and long-term jobs for locals. More salary support is given for each local hire who is a mature person (above 40 years old), a person with disability or an ex-offender hired as these groups of people are likely to face more difficulty looking for a job.

Employers hiring eligible locals can receive up to $15,000 per hire. Those hiring mature workers, persons with disabilities, and ex-offenders from 1 March 2021 onwards will receive higher support of up to $54,000 per hire.

Over the same period since the JGI was introduced, unemployment has come down from 4.8% (September 2020) to 4.1% (February 2021). This is an encouragement sign.

Nevertheless, as unemployment remains elevated, MOM is encouraging employers to take full advantage of the JGI to meet their manpower needs. The JGI has been extended to September 2021.