And a mistake follows Jamus’ attempt at clarification.

But first, let me point out the ridiculous consequence of Jamus Lim’s suggestion for criminal records to be permanently eliminated.  Should the person re-offend, say 10 years down the road, with no criminal record due to it being eliminated, he will be considered a first-time offender and given the lighter sentence of a first-time offender when in fact he is a re-offender.

Does this make sense and is this how a fair and just system work?

This is something Jamus has clearly failed to give thought to.

Not only that, in seeking to clarify his suggestion, he made a mistake in his Facebook post saying that a ‘spent’ record is REMOVED.

This is clearly wrong.

When a person’s criminal record is spent, it does not mean that it is removed or erased from the Register. Particulars of the person’s conviction, as well as the person’s fingerprints, photographs, DNA information and any other particulars which were recorded, remains on the Register.

His glaring mistake reflects the level or lack of depth of research he put in before asking his question.

It is good enough that a record can be spent. There is no need to ask for elimination of records as the consequences on the justice system are severe.

For crimes that are not so serious, the criminal record can be spent.

What does it mean for a record to be spent? It means that the person can ‘lawfully’ say that he has no criminal record. When asked whether he has any criminal record, he does not have to declare it.

However, if the question asked is whether he had ever been convicted in a court of law, then he must still answer ‘yes’ to this question.

To qualify for a record to be spent, the offender must not have been sentenced to an imprisonment term exceeding three months or to a fine exceeding $2000. He must also fulfill a 5-year crime-free period.

Make no mistake. Should a person with a spent record breaks the law in the future, his previous record will be taken into consideration against him. 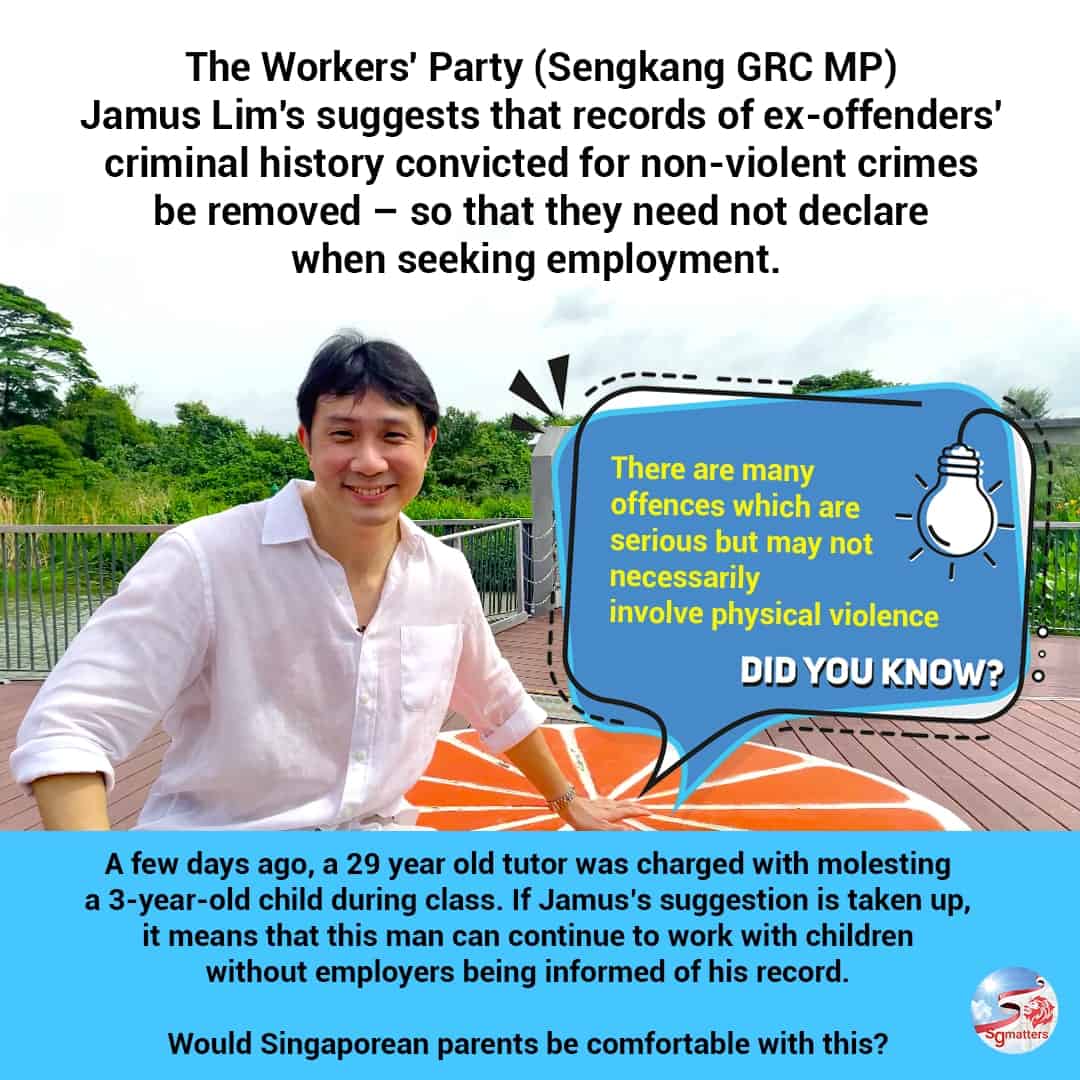 Read also  WP Jamus Lim is ‘politicking, and pulling a fast one over your eyes – plain and simple’: Donovan Choy

To forgive is divine

Everyone makes mistakes, some more serious than others. We have all heard of the saying that ‘to forgive is divine’.

With no knowledge of previous offences, we cannot claim to be forgiving. In other words, we cannot whitewash the old by eliminating records, and then claim we have forgiving employers when they have employed people without any knowledge of their past offences.

Employers do have a right to know the background of the people they are going to employ especially when the job requires the person to be placed in a position of trust. This is not difficult to understand. For example, before you employ a domestic helper to take care of your baby, would you not want to know her background? You would hesitate to employ someone who has a conviction for child abuse.

To employ or not to employ is a matter for the employer to decide after taking into consideration the person’s past and present testimony.

Instead of taking the lazy way out and asking for criminal records to be eliminated and pretending crimes did not happen, it is better to work with Yellow Ribbon Singapore to help ex-offenders reintegrate into society and to convince more employers to come on board.