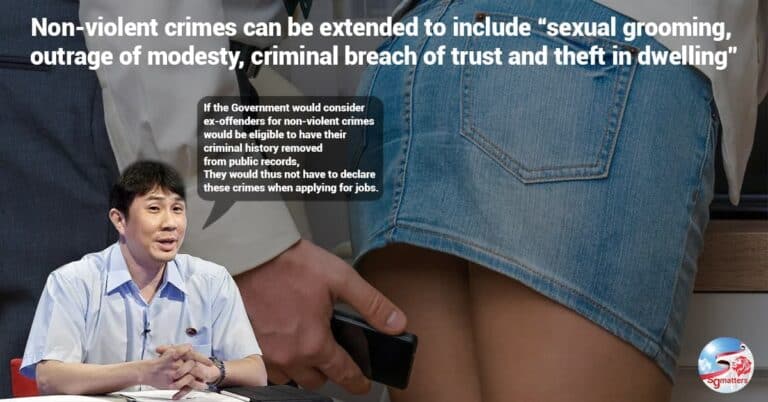 Mr Giam also pointed out that while the Opposition often fights for transparency, what the Government tries to do is balancing transparency with what is in the best interest of the public they serve.

He also provides insights into what the Government is doing to support ex-offenders, and the programmes available to help in rehabilitation and employment.

Here is the English translation of the article that is worth a read.

As a Chinese proverb goes, “Take a wrong step in life, regret plagues one for life.”

Should the records of the criminal history of ex-offenders convicted of non-violent crimes be removed, we may possibly see a drastic increase in non-violent crimes in the near future. The consequence of wiping non-violent records then backfires, leaving the government to bear the potentially heavy cost of social issues as a result of this move.

A couple of years ago, as I was dining at a hawker centre, I was approached by a couple of heavily-tattooed youths. They were peddling keychains while candidly sharing about the hurdles in gaining employment in the face of their criminal pasts. Empathy took hold of me and the interaction left a lasting impression upon me.

Later on, I come across reports of syndicate plying keychains, profiteering from sob stories similar to the one I’ve been fed. The Yellow Ribbon Project was then hit adversely by the wrongdoings of these opportunists.

10,000 ex-offenders rejoin our society yearly. The first barricade they face is the discrimination our society has against them, an issue Yellow Ribbon Project has been combatting for years now.

From last September to February this year, the government is offering additional support to employers who hire former convicts. These employers receive up 50% wage co-payment through Jobs Growth Incentive(JGI) scheme. Since October 2020, similar incentives are also given to employers hiring the disabled.

Employers, who hire ex-offenders through Yellow Ribbon Project (formerly Singapore Corporation of Rehabilitative Enterprises), Industrial and Services Corporative Society (ISCOS) and halfway houses in contact with Singapore Prison Service, receive up to $2500 for a year as part of the incentives.

The current labour market, in the face of COVID-19, only puts up more hurdles in the path to employment for ex-convicts. The governmental support and incentives then offer timely relief. However, we have yet to see just how many shall benefit from these supplements.

No matter the extent of rehabilitations our government offers, our society’s mindset regarding ex-offenders also plays a huge role in determining the success rate of rehabilitation. It is a fact that the general public remains prejudiced against this group.

The Yellow Ribbon Project has been launched for almost 2 decades now. Through their cooperation of all relevant organisations, Singapore’s recidivism rate has dropped to an all-time low in our history. According to the Singapore Prison Service’s recently published statistics, the recidivism rate has dipped to 21.1% in 2018 from 24% in 2017. This is the lowest percentage on record since data was collected from a decade ago.

In 2021 World Population Review of international recidivism rates report, China, India (ranked No.2), Indonesia, Japan, South Korea, Hong Kong, Malaysia, Sri Lanka and more Asian countries rank far higher on the list than Singapore’s rank of number 114. We are faring considerably better than our Asian counterparts. Yet, ranking 114 out of 232 countries indicates that we are lagging behind quite a number of countries too.

Recidivism is defined as a relapse of criminal behaviour that results in re-arrest, re-conviction, and re-imprisonment within two years.

Community service prepares offenders to rejoin society, allowing them a period to adjust to life outside of prison, a passage of time essential to reducing recidivism rates.

During a Parliament session this month, Workers’ Party member Jamus Lim urged the government to expand the Yellow Ribbon Project by removing records of the criminal history of ex-offenders convicted of non-violent crimes so as to enable a smoother path to employment.

Minister for Home Affairs and Law K Shanmugam posted on Facebook on Thursday evening (Feb 4) about the suggestion. He said that the approach may not be wise especially considering how non-violent crimes can be extended to include “sexual grooming, outrage of modesty, criminal breach of trust and theft in dwelling”. Mr Shanmugam brought up the case of a 29-year-old tutor who was recently charged with molesting a three-year-old girl during class and asked A/Prof Lim if that man should be allowed to work without his future employers having access to his record.

Opposition parties and the general public have long called for transparency in governmental processes. The current transparency of the government with regards to criminal records fit this call. Not only that, but it also protects the safety of and ensures fairness to society.

Jamus Lim’s bold suggestion evidently lacks thoughtful depth, even bordering on the negligence of the strong deterrence criminal records have on criminals or potential criminals. As the Chinese proverb goes, “ Take a wrong step in life, regret plagues one for life.” Should non-violent crimes leave no trace of record, crimes of such nature will surely see a spike in the near future.

On the other hand, we, as a society, benefit from this suggestion as it pushes us to examine our stance on this social issue.

“Tie A Yellow Ribbon Round The Ole Oak Tree” originates from 70s America, based on a true story. It was then written into a popular folk song. In 1977, Japanese director Yoji Yamada produced “The Yellow Handkerchief”, drawing inspiration from its American song. A poignant moving story, starring Ken Takakura and Chieko Baisho, is then born out of it.

What began as a love story has evolved into a rousing humanitarian call which transcends borders. The Yellow Ribbon Project is now deeply rooted in Singapore. It has not only tested us in our values but also helps bring to light the tolerance and sympathy we possess. 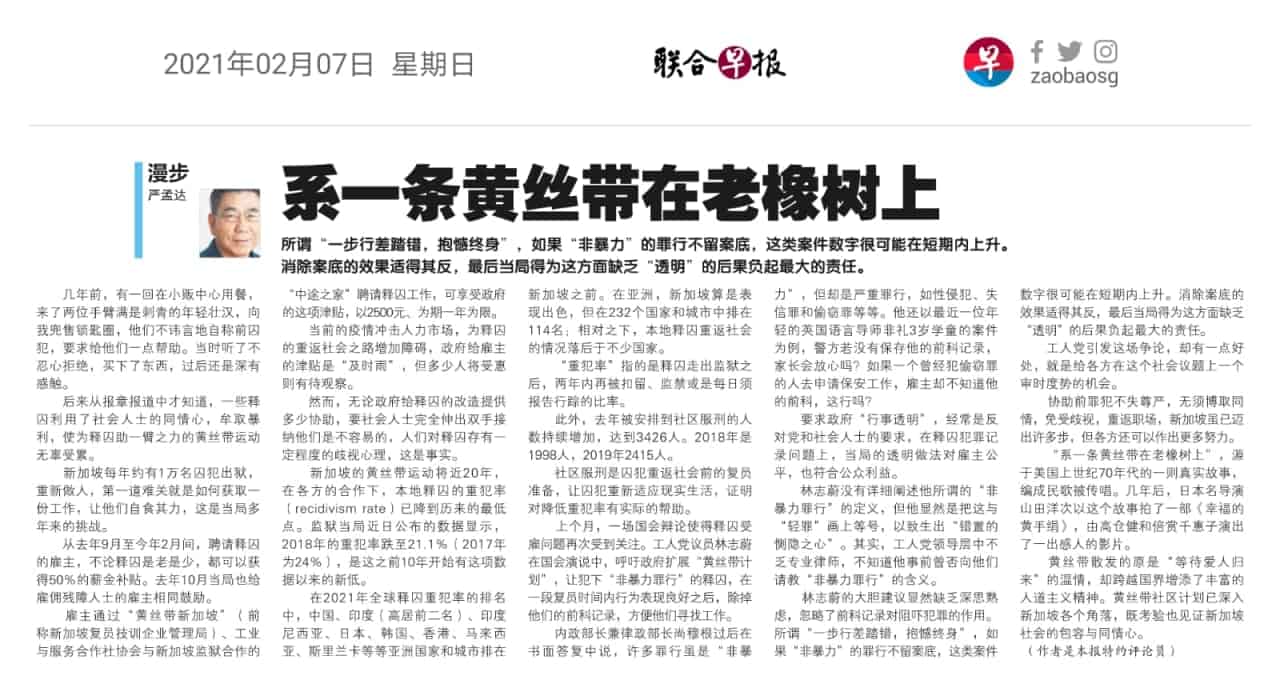 May 13, 2022
PrevPreviousSengkang GRC residents unhappy with estate management
NextJamus’ idea to reveal the size of reserves is baffling: readerNext
On Key