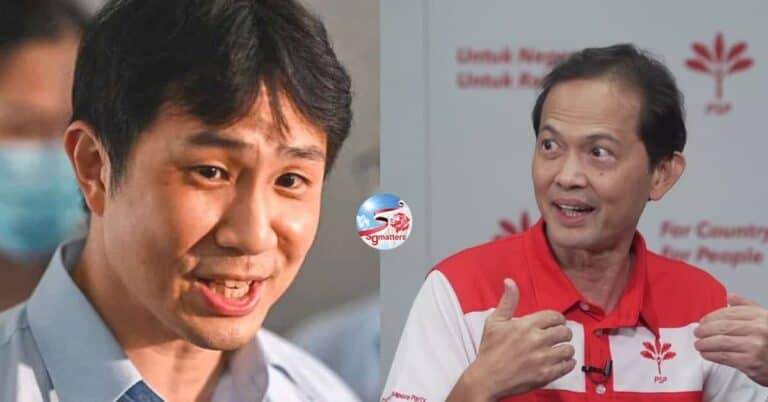 It is easy to be the opposition in Singapore and I’m not kidding. Let me tell you why.

Take the Progressive Wage Model. It’s the brainchild of former minister and former secretary-general of NTUC, Lim Swee Say. Tripartite partners have been working hard since 2012 to implement the models for various sectors. The work continues.

But who remembers Lim Swee Say or give credit to him for improving the lives of low wage workers and giving them a wage ladder as well?

In fact, despite the model making such a difference to low wage workers, it had often come under criticisms, especially from opposition supporters just for the reason that its idea originated from the ruling party.

Then came Jamus Lim from Workers’ Party who declared in June this year in a Facebook post, that the model was along the lines that the WP has been fighting for. This was when a second update to the PWM was announced for the cleaning sector. And for good measure, he added the ‘make your vote count’ tag to his post. With just one Facebook post, he took credit for the Progressive Wage Model which he had earlier criticised in Parliament, describing union leaders pursuing it as having ‘folksy wisdom’ not borne out by science.

And of course adoring fans went, “Ya, thank you, Workers’ Party. Well done, WP. This is why we need more opposition!”. 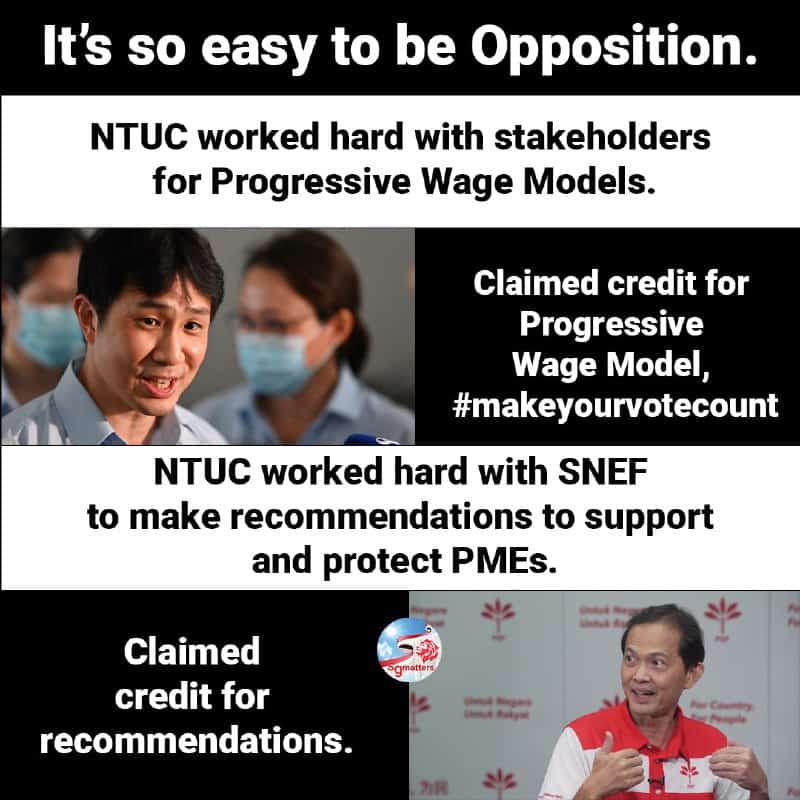 And then we have PSP Leong Mun Wai taking credit for converations that were apparently started by him. We are to believe that before Leong appeared on the scene and made his speech in Parliament on CECA etc, no one give a dime about PMEs.

Unsurprisingly, fans cheered him as the champion of the Singaporean workers and they went, “Thank you, Sir. This is why we need more opposition.”

And yet, if Mr Leong is honest, he will not take credit for what he did not start. These conversations and engagement by NTUC started more than a year ago in August 2020, long before Leong made his speech in Parliament.

NTUC and Labour MPs had engaged with thousands of PMEs through dialogues, feedback and surveys to better understand their concerns and needs. A taskforce formed by NTUC and SNEF then worked together to look into these needs and concerns and out of the many meetings are the 9 recommendations they presented to the Manpower Ministry for considerations and adoption. These recommendations include better support for PMEs and measures to strengthen the Singaporean core and to help mature PMEs.

What does all these mean for the ruling PAP?

They will still work hard to serve the people to the best of their abilities, burn the midnight oil, lose sleep over the people’s future. Fear of mediocrity will be the impetus that drives them. But they will still be accused by opposition-loving supporters of being heartless and lazy, doing nothing but happily collecting their salaries and living it up, enjoying themselves every day.

They will do the good work but others will come and take the credit from them. The narrative is that every good policy is the result of the Opposition in Parliament and every unpopular policy is because there are not enough opposition members in Parliament. Either day, the PAP loses and the opposition wins.

May 13, 2022
PrevPreviousCNB Statement on findings relating to investigation into Justin Lee who died after a fall from height
NextWhy are there 2 different numbers for the ICU? Ho Ching explainsNext
On Key