It is in the interest of a cohesive society to lift the wages of workers at the bottom of the ladder. So said Senior Minister Tharman Shanmugaratnam at the Singapore Perspectives 2021.

In the last 10 years, lower-income Singaporeans at the 20th percentile of the income ladder have seen their real incomes increase by about 40 per cent. This is still behind the 65% increase in median incomes in real terms in the last two decades. There is therefore a need to help the lower-income level up.

However, the approach to do this must be sustainable.

A blanket minimum wage alone cannot sustain income progression for a broad spread of workers. A combination of approaches and economic strategies is needed.

(1) expanding the Progressive Wage Model (PWM), also known as “minimum wage-plus
(2) Workfare – which is effectively a negative income tax to boost the income of low-wage workers, and
(3) economic strategies to ensure jobs are being created for all and Singapore stays competitive.

The PWM and minimum wage do not differ philosophically. They differ in terms of their practical design and application.

“What matters is the actual level of that minimum rung and how it affects the least skilled and most vulnerable in our workforce, rather than aggregate employment or averages,” Mr Tharman said.

Concern is for older workers with little education

Who are our most vulnerable workers?

In many countries, the concern is with younger workers when they talk about the effects of a minimum wage.

But in Singapore, it is the older generation of Singaporeans who are the greatest concern. This is because half of the bottom 10% of workers are above the age of 55. Of these, two-thirds did not complete secondary school.

This group of older workers had done simple, lower-paying jobs for much of their lives. They have limited capacity to switch to better jobs if they were displaced.

What the government seeks to do with the PWM is to ensure a minimum wage with maximum employment.

This is why the Government is working with its tripartite partners to raise their pay through the PWM in a calibrated manner, to ensure they can remain at work.

“We are working on it sector by sector, together with skills upgrading, in a way that ensures that we get not just a minimum wage, but maximum employment,” he said.

The sectoral approach to raising pay instead of a blanket minimum wage across all sectors is not unusual internationally.

Some sectors of activity have higher average productivity and “capacity to pay” than other sectors, and can afford higher minimum wages.

Blanket Minimum Wage for all not ideal for motivation, nor reward those who upgrade their skills

The PWM avoids a situation that some countries face after they implement the minimum wage – a flattening of the wage profile within the firm as employers try to save costs.

“People are held at the minimum wage for a long period, which is not ideal from the point of motivation and rewarding those who upgrade their skills,” Mr Tharman said.

According to notes by the ILO, a blanket minimum wage may also act as a barrier to the employment of certain groups of workers like those with disabilities.

Workfare is effectively a negative income tax to boost the income of low-wage workers. It is a broad-based measure that tops up the salaries of our lower-income workers and helps them save for retirement. Workfare can comprise up to an extra 30 per cent of the worker’s monthly income.

Workfare and Progressive Wage Model (PWM), together with many other support measures, have uplifted low-wage workers while keeping employment levels high and unemployment levels low. They are a clear expression of our social solidarity and by no means inferior to a minimum wage.
Read also  Minimum wage setting risks becoming a political auction: Koh Poh Koon
Anyone can suggest a minimum wage. It does not take much to suggest an arbitrary minimum wage. But it takes more than a minimum wage to help the low wage workers. The PWM is hard work. So are all the other measures. But that’s what solidarity is all about – putting in the hard work to make sure measures to uplift the low wage workers are sustainable. 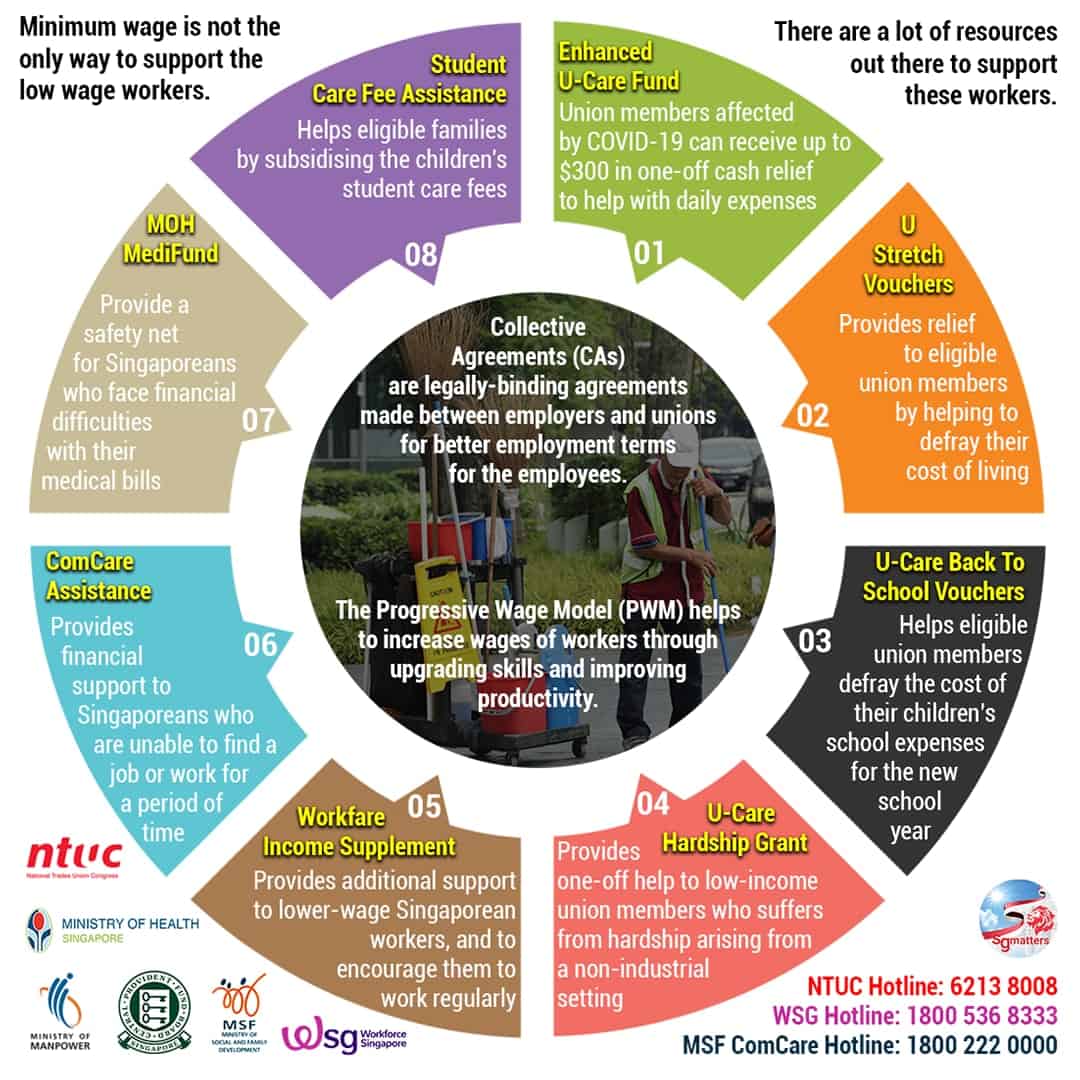 “At the end of the day, we are all our brothers’ keepers.”
– Tharman Shanmugaratnam –