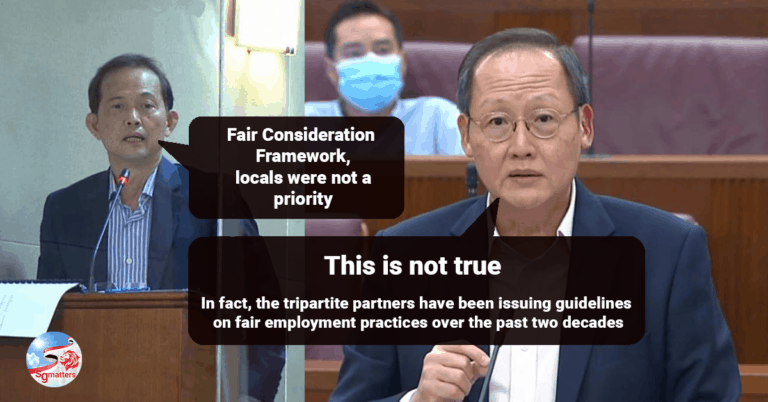 The Fair Consideration Framework (FCF)was implemented in 2014 after much lobbying by Labour MP Patrick Tay. The Progress Singapore Party claimed that before the implementation of this framework, locals were not a priority with the government.

This is not true, Manpower Minister Dr Tan See Leng said in Parliament on 14 September 2021.

“In fact, the tripartite partners have been issuing guidelines on fair employment practices over the past two decades, having introduced the “Tripartite Guidelines on Non-Discriminatory Job Advertisements” as early as 1999,” Dr Tan said.

In 2007, the government issued the Tripartite Guidelines on Fair Employment Practices (TGFEP). TGFEP was enhanced in 2011 to include guidelines on hiring and developing a Singaporean core.

In 2014, the introduction of the Fair Consideration Framework took these efforts one step further by introducing the job advertising requirement.

“And we have been progressively strengthening the FCF ever since,” said Dr Tan. “We introduced the FCF Watchlist in 2016 as a systematic framework for engaging firms with outlier workforce profiles and scrutinising them for potential discrimination.”

“In 2020, we strengthened the penalties against firms found to have discriminatory hiring practices.

“In the same year, we extended the coverage of the FCF job advertising requirement to S Passes and doubled the minimum advertising period from 14 to 28 days,” Dr Tan added.

“Ensuring responsible and fair employment practices has always been our priority.”

At the National Day Rally this year, PM Lee announced that the Tripartite Guidelines on Fair Employment Practices (TGFEP) will be enshrined into law. This is a major step that represents a philosophical shift in position. It will cover discrimination on the grounds of nationality, in addition to other kinds of discrimination covered by the TGFEP.

“When you consider all the policies we have put in place, it is quite clear that we are providing strong support for the employment of local PMETs,” Dr Tan said.

“Many companies tell us that they prefer to hire locals over foreigners, so long as they can find the skills here. Even if there is initially a shortage of skills, many are willing to develop local talent to fill these roles,” said Dr Tan. He gave the example of PayPal. When it first started, it had to rely more heavily on global talent for specialised technical skills and more senior roles that required managing regional teams. However, PayPal committed to hire and train 150 Singaporeans across tech and business roles over 3 years.

May 13, 2022
PrevPreviousLeong Mun Wai owes NTUC and union leaders an apology
NextHandicapped delivery worker inspires others with his independenceNext
On Key