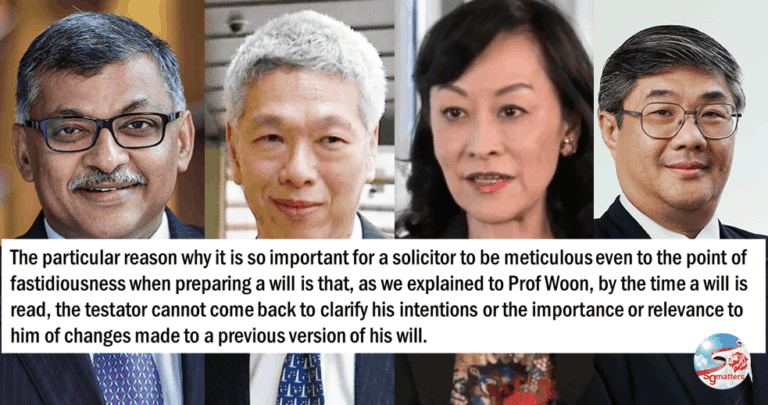 Prof Walter Woon’s submission was that it was sufficient for the draft Last Will to be broadly similar to the First Will. Therefore LSF had acted in Mr Lee’s interests and that it would have been “meaningless” and “insulting” for her to advise Mr Lee to seek independent advice.

On this basis, he argued that the charges against LSF should be dismissed.

What the judgement says

The Court of 3 Judges clearly does not think this is sufficient.

In his judgement, Chief Justice Menon explained why the Court of 3 Judges had no hesitation in rejecting Prof Woon’s submission that it was sufficient that the Draft Last Will and the First Will were broadly similar.

It is ‘wholly ill-conceived and contrary to the most basic principles governing the preparation and execution of wills. It suggest that it is unimportant to ensure that the will that is put forward for execution accurately reflects the testator’s (Mr Lee) intentions.

The particular reason why it is so important for a solicitor to be meticulous even to the point of fastidiousness when preparing a will is that, as we explained to Prof Woon, by the time a will is read, the testator cannot come back to clarify his intentions or the importance or relevance to him of changes made to a previous version of his will.

This is because Mr Lee was ‘in every way plainly meticulous with his wills’.

Did not have the First Will before him

“In truth, he was not in a position to compare it with the First Will to check whether there were any differences between them, and if there were, to consider whether any of the differences were material to him,” said CJ Menon.

CJ Menon made this point because Prof Woon had made much of the fact that Mr Lee was legally trained, had a brilliant legal mind and was lucid at the time he signed the Last Will.

“While all this is true, Prof Woon’s submission that the Testator could therefore himself have corrected any errors in the Last Will or any divergences from the First Will that were material to him was simply fanciful, given that the Testator could not possibly have been expected to recall from memory the contents of the First Will, and, thus, would not have been able to tell whether there were any differences between the terms of the Last Will and those of the First Will.”

Would Mr Lee believe LSF that the draft Last Will was the original agreed Will?

LHY removed Ms Kwa Kim Li from the email chain before persuading Mr Lee to sign the Will. Ms Kwa had prepared all of Mr Lee’s previous Wills.

Preparation for the execution of the Last Will took place after Ms Kwa Kim Li’s exclusion from the email chain. With Ms Kwa’s non-involvement, Mr Lee had only the representations from LSF.

At the trial, LSF herself accepted that Mr Lee would have believed her when she told him that the Draft Last Will was the ‘original agreed Will’.

After Ms Kwa’s exclusion from the email chain, the representations from LSF became the sole basis on which Mr Lee would have concluded that the draft Last Will was indeed the First Will. The Court of 3 Judges therefore conclude that those representations did amount to legal advice in assuring Mr Lee that his instructions to revert to the First Will were being given effect to.

Mr Lee signed the Last Will believing the representation by LSF that it was ‘identical to the First Will, such that all that remained to be done was for him to sign the engrossed version of the draft before two witnesses.